Pakistan are set to begin their twelfth ODI series in New Zealand from Saturday. Since 1972-73, when they played each other in their first ever ODI at Christchurch, the two teams have clashed 44 times in New Zealand, with the hosts winning 26 ODIs to the visitors’ 15. This includes two games played at the 1992 World Cup. Let us look back at five of the most exciting encounters from this fixture.

Under the inspirational Imran Khan, Pakistan had somehow overturned a desperate start to the tournament and made it to the semifinal against co-hosts New Zealand at Eden Park. Incidentally, New Zealand’s only defeat in the league stage had come at the hands of Pakistan. After electing to bat first, the Kiwis rode on an authoritative 91 from captain Martin Crowe to post a challenging 262/7.

Pakistan began sluggishly, and were well behind at 140/4 after 35 overs. It was at this juncture that Inzamam-ul-Haq, aged 22, walked in. ‘Inzi’ conjured a game-changing innings, blitzing 60 from just 37 balls, and though he was run out with 36 still needed, he had done enough. Javed Miandad (57*) ensured there were no hiccups, and he saw Pakistan home by four wickets with an over to spare.

Pakistan had already sealed the series after winning the first three games. New Zealand’s bowlers produced a highly disciplined performance, stifling the Pakistani batsmen with nagging accuracy. No batsman scored more than 34, as the visitors huffed and puffed to 161/9 in their 50 overs. Gavin Larsen, who took the first three wickets to fall, returned tidy figures of 4/24 from his ten overs. 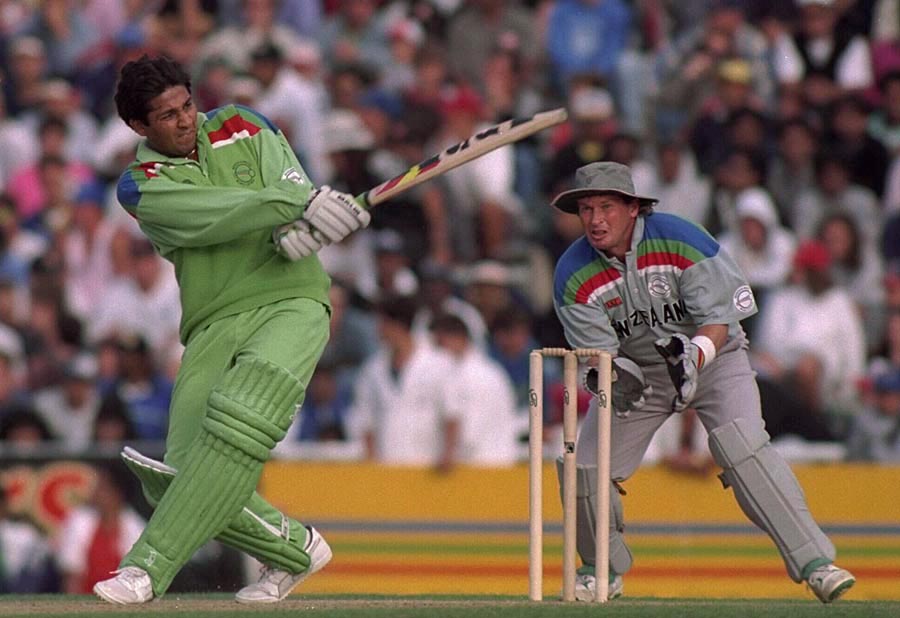 The fiery Waqar Younis removed both openers with only nine runs on the board, before captain Ken Rutherford scored an anchoring 47. Chris Cairns and Shane Thomson shared in a 57-run stand for the fifth wicket after coming together at 85/4, driving New Zealand to an advantageous position. However, Waqar was not done yet. He had Thomson out caught behind, inducing a flurry of wickets.

It all boiled down to the last over, to be bowled by Waqar. New Zealand needed three runs, Pakistan two wickets. Matthew Hart fell first ball, before Richard de Groen sneaked a double. This was followed by a dot ball, with de Groen surviving a leg-before shout. He was not so lucky the next ball, as Waqar trapped him on the pads to finish with 6/30 and force the first tied ODI in New Zealand.

New Zealand levelled the four-match series with a thrilling one-wicket win at Lancaster Park. Pakistan floundered to 61/3 before Inzamam-ul-Haq (80) and Saleem Malik (58) revived the innings with a fourth-wicket association worth 114. Fast bowler Danny Morrison (5/46) pulled things back for the hosts and finished with his first ODI five-wicket haul, keeping the total to 232/9.

Aaqib Javed dispatched the openers early to reduce New Zealand to 21/2. Redemption came via the middle order – Bryan Young and Stephen Fleming put on 77 for the third wicket; Adam Parore and Chris Cairns (54) added 97 for the fifth. A collapse of 5/17 saw the score slide to 221/9, but the last pair of Gavin Larsen and Morrison stayed put, the former hitting the winning four with a ball left. 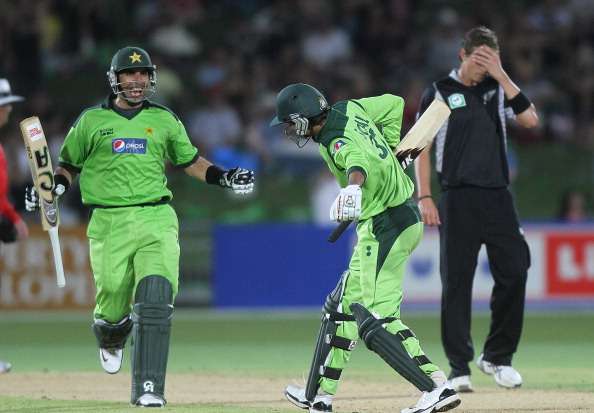 New Zealand held a series-winning 3-1 lead coming into this final match at the Westpac Stadium. The Pakistani bowlers had done well to reduce the hosts to 73/3 in the 16th over, but they then ran into Hamish Marshall (84) and Craig McMillan (81). The pair batted for more than 25 overs to put on 157 for the fourth wicket. New Zealand duly amassed 307/8, then the highest total at the venue.

In reply, Pakistan struggled to 73/4 in the 16th over. Captain Inzamam-ul-Haq (67) and Moin Khan (52) added 98 for the fifth wicket, but the required rate crept above ten. Enter Abdul Razzaq, who dominated a 94-run stand for the sixth wicket with Inzamam. He crashed 89 from 40 balls before holing out with Pakistan needing 14 from two overs. New Zealand kept their nerve to win by four runs.

New Zealand lost regular wickets after electing to bat, and at 79/5 in the 21st over, they were in danger of being bowled out. James Franklin came to rescue, scoring 62 from number six and sharing 62 with Brendon McCullum and 64 with Nathan McCullum for the sixth and seventh wickets respectively. Nathan McCullum struck 53* to give further impetus to the innings, which wound up at 262/7.

Captain Misbah-ul-Haq joined forces with Younis Khan at 84/3, and the seasoned pair added 89 for the fourth wicket. With the required rate rising, wickets began to fall at a greater frequency in the last ten overs. Misbah remained undeterred though, holding one end with an assured 93*. With 13 needed, Sohail Tanvir clouted three fours in the 49th over to seal Pakistan’s two-wicket win.