Unheralded Namibia produced one of the greatest shocks in youth cricketing history as they toppled defending champions South Africa by two wickets in a gripping Group A match of the 2016 Under-19 World Cup at Cox’s Bazar.

Needing nothing less than a win to stay alive in the competition, South Africa crumbled in spectacular fashion after deciding to bat first. Having already dished out an ordinary performance against Bangladesh, their batsmen simply imploded in the face of some disciplined pace bowling from their neighbours.

18-year-old Fritz Coetzee set the tone by removing the openers in his first two overs itself. This excellent start was enough to galvanise the rest of the pack as the so-called ‘minnows’ refused to remove their feet from the throats of the ‘big boys’.

Michael van Lingen, another 18-year-old, ripped through the middle order as South Africa fell from a shaky 35/2 to a hopeless 37/6 in just 15 balls. Further sorrow was in store for the champions as they lost two more wickets with barely half the overs finished. The score read a scarcely-believable 60/8 and it could not have been worse.

Willem Ludick attempted a revival with a patient 42 from number eight, but the final total of 136/9 in their allotted 50 overs was far from convincing. Van Lingen (4/24) and Coetzee (3/16) shared seven victims between them while 19-year-old captain Zane Green had a sublime outing, pouching five catches behind the wicket.

The bowlers had done their job, now all the batsmen had to do was hold their nerves and see their side to a famous win. However, it was not going to be easy as the bruised Proteas struck first blood, removing both openers to have the score at 10/2. In walked Lohan Louwrens, all of 16 years old.

Louwrens’ maturity belied his years as he built a highly creditable innings under pressure. Undeterred by the wickets falling around him, he set his sights on achieving the modest target. At 74/5, the contest could have gone either way but Louwrens found an able partner in Charl Brits. 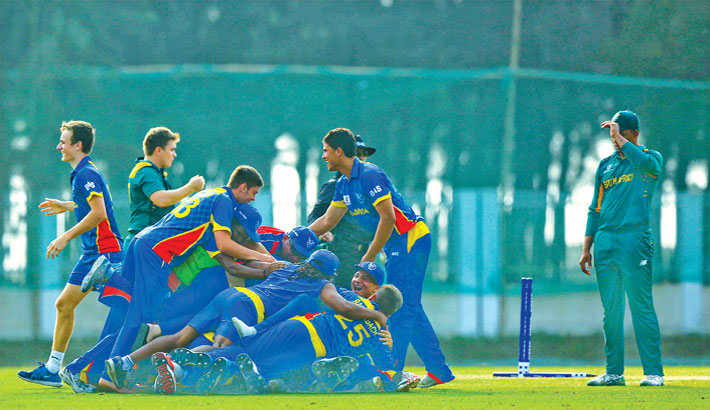 The Namibia Under-19 team rejoice after beating South Africa in their crucial group match of the Under-19 World Cup (source – daily-sun.com/habibur rob)

The pair shared a stand of 52 for the sixth wicket, and in spite of a late flurry of three wickets for ten runs, Namibia’s young guns ensured that they became the first sporting unit from their country to reach the quarterfinals of a major event. Louwrens remained unbeaten on 58 while Coetzee hit the winning single, much to the joy of his teammates.

Earlier in the week, Nepal had seen off New Zealand to enter the quarterfinals. The success of Namibia and Nepal is yet another reminder of how the presence of the non-Test playing nations can add excitement to a global tournament. Such are the peformances that can inspire future generations to take up the game.

Unfortunately, the closed-door mindset of the ICC neutralises the efforts of these young cricketers who undoubtedly aspire to play for the senior team at the World Cup. With the 2019 ‘World Cup’ slated to have just ten teams, it is hard to see how they can remain motivated when there is virtually no scope to qualify for the game’s premier event.

While it would be wishful thinking to hope for the ICC to change its stance in the near future, this result has the potential to serve as a shot in the arm for Namibian cricket. Such a landmark win over their celebrated neighbours who were defending the title can do wonders to the profile of the game in the country.

Interestingly, this is not the first time that Namibia Under-19 have collected a big scalp on the world stage. Back in the 2002 edition in New Zealand, they had beaten Sri Lanka by four wickets. Pace bowler Burton van Rooi – who was to play for the senior side in the 2003 World Cup – was the hero of that game with 4/27.

Namibia will now face heavyweights India in the quarterfinal on the coming Saturday. The Under-19’s success story has come as a ray of positivity to the country’s cricket fraternity, which was jolted by the unfortunate death of their star batsman Raymond van Schoor last November.

Moreover, earlier in 2015, the senior side had missed out on a spot in the World Twenty20 by a whisker when they were knocked out by Oman in a must-win game at the qualifying tournament. This loss also meant that they squandered a chance to secure full T20 international status.

Namibia’s win against South Africa was preceded by a comprehensive nine-wicket defeat of Scotland, and thus an eight-wicket defeat in the final group game against hosts Bangladesh did not have any bearing on their passage to the next round.

Irrespective of how the Namibians perform in the quarterfinal against India, they have done enough to prove that if given adequate opportunities, there is no reason why a supposed underdog team cannot achieve success against more experienced opposition.