Uttar Pradesh, India’s most populous state, might well be on the verge of a cycling revolution. Regarded as the common man’s mode of transport across the country, the humble cycle is set to take centre stage in the state if recent happenings are any indication.

Back in 2014, Uttar Pradesh’s young and dynamic Chief Minister Akhilesh Yadav visited the Netherlands and evinced keen interest in gaining inspiration from the Dutch’s cycling structure. Cycling forms approximately 57 percent of all modes of transportation in the Netherlands and thus the country boasts of a network of top-class cycling tracks and arenas.

With the seeds of an ambitious plan sown, the Chief Minister eventually announced in March 2015 that Lucknow’s Guru Govind Singh Sports College will be housing the state’s first full-fledged cycling academy.

Slated to be developed on a 10-acre area with a budget of Rs. 168 crore, it was revealed that the academy and its surrounding hostels would be in the form of a complex. Fittingly, the rooftop of the complex would be in the shape of a bicycle – incidentally the election symbol of Yadav’s Samajwadi Party.

The primary objective of the plan would be to provide world-class facilities to cyclists and also to serve as a venue where international competitions could be hosted. Emphasis would also be laid on preparing and training students for international level competitions. 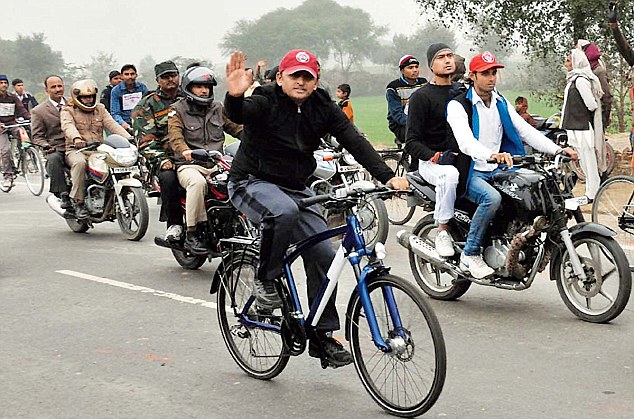 Besides helping professional cyclists to hone their skills, the proposed academy can also be expected to promote the benefits of cycling – both to human health and to environmental purity.

Arrangements are being made to ensure that as many as 4500 people can be accommodated at one time at the academy, which will be centrally air-conditioned. While the campus would be covered, the rooftop will have provisions for opening in order to hold events in natural light.

Eight cycle tracks are being planned as part of the velodrome – made of Belgian pine wood, which will solely be used for the purpose of competitions. A separate concrete track will be built for routine practice.

Later in 2015, the Chief Minster affirmed that Lucknow would soon boast of the country’s largest and most comprehensive cycle track network – of abut 270 kilometres. This would also conform with the state government’s constant efforts to promote green and non-motorised transport.

Ever since Yadav’s thought-provoking European sojourn, U.P state officials have been busy trying to judge the most feasible options to develop tracks in the capial city.

With Lucknow’s pollution levels increasing by the day, the vision of the Uttar Pradesh government should be lauded. It is encouraging to see the country’s most populous state take the lead in promoting the many benefits of cycling and make concrete efforts towards making the country more bicycle-friendly.

Given the potential of cycling in India, such ideas have been hitherto disappointingly been few and far between. Uttar Pradesh can prove to be the guiding light in this respect.

It remains to be seen whether other state governments cash in on the increasingly health-conscious mindsets of the Indian populace as well as the desire of athletes to excel beyond conventional sports.

Here’s hoping that the inauguration of the cycle academy will pave the way for a much-needed, healthier cycling environment in India.