Yet another Boxing Day is upon us, and yet another traditional Boxing Day Test match is underway at the iconic Melbourne Cricket Ground.

An MCG Test which included 26th December as one of the days was first played in the 1950-51 Ashes, but it was only in 1980 that it became an annual fixture. Since then, except for 1989, the MCG has hosted the Boxing Day Test every season, with the 26th mostly being the opening day. Let us look at five classic Boxing Day Tests from the days gone by, in chronological order:-

This was the first Test of the 1981-82 Frank Worrell Trophy. Michael Holding and Andy Roberts rattled the Australians early, reducing them to 8/3 and 26/4. Kim Hughes, who came in at number five then proceeded to play one of the finest Test innings.

In a gutsy display, Hughes remained unbeaten on 100 out of a total of 198. Holding with 5/45 was the best of the bowlers. Dennis Lillee then ripped through the Windies top order, leaving them in tatters at 10/4 at stumps on day one. The following day Lillee became the highest wicket-taker in Tests when he dismissed Larry Gomes, breaking Lance Gibbs’ record of 309. 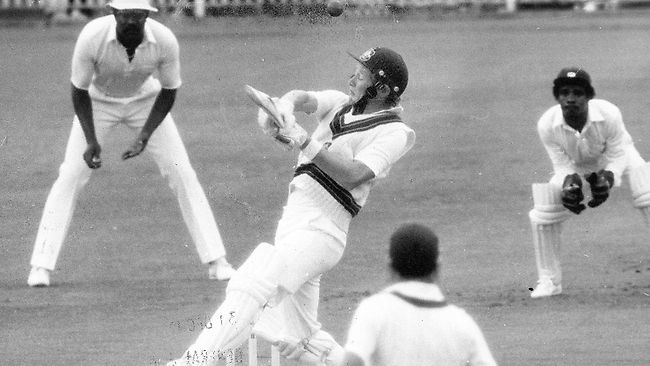 Kim Hughes on his way to an unbeaten 100 in the 1981-82 Boxing Day Test against the West Indies – one of the great Test innings played (source – perthnow.com.au)

Thus the West Indies required a tricky 220 runs to win. By the end of day four they were 154/9, collapsing from 80/3 after having recovered from 4/2, and were duly bowled out for 161 early on the final day, giving Australia victory by 58 runs.

This was the fourth Test of the Ashes and Australia were already 2-0 up. In what was one of the most exciting Tests ever played, the first three days each saw a completed team innings. On day one, England made 284, mainly due to a 161-run fourth-wicket stand between Chris Tavare (89) and Allan Lamb (83).

Rodney Hogg and Bruce Yardley took four wickets each. On day two, Australia replied with 287, only just taking the lead. Kim Hughes top-scored with 66 while David Hookes and Rodney Marsh both scored 53 to help Australia recover from 89/4.

In their second innings on the third day, England were reduced to 45/3 before Greame Fowler (65) shared in an 83-run partnership for the fourth wicket with Lamb. Some crucial lower-order runs enabled them to end at 294 after being 160/6.

This left Australia with two days to chase down 292. They started off poorly, and were at a wobbly 71/3 before Hughes and Hookes put on 100 for the fourth wicket. But from thereon, the hosts collapsed and were staring at defeat at 218/9, with seamer Norman Cowans (6/77, playing his fourth Test) doing the bulk of the damage.

Allan Border (62*) was still there though, and along with last man Jeff Thomson led his team to 255/9 with a day left. The duo did everything right until just four runs were needed, when Thomson was caught at first slip by Geoff Miller off Ian Botham to script a three-run win for England and break the hearts of the optimistic crowd. The final Test was drawn and Australia regained the Ashes.

Australia were leading the three-Test series 1-0 and this was the final Test. John Wright (99) and Martin Crowe (82) helped New Zealand reach 317 in the first innings (Craig McDermott 5/97). Australia slumped to 78/4 in reply before Peter Sleep became an unlikely saviour, scoring a career-best 90 from number seven.

Sleep and Tony Dodemaide (50) put on 80 for the eighth wicket as Australia made 357, the great Richard Hadlee picking 5/109. Dodemaide starred with the ball in the second dig, taking 6/58 to help restrict the Kiwis to 286, Crowe shining again with 79.

Australia needed 247 in a day, while New Zealand had to take ten wickets to level the series. The wickets came at regular intervals, as only David Boon (54) managed a half-century. Hadlee kept up the pressure with crucial breakthroughs, as Australia slid from a safe score of 209/5 to a dire 227/9.

Amid great tension, the last pair of McDermott and Mike Whitney held out, batting the last 4.5 overs to salvage a draw, as Australia ended at 230/9 to win the series. Hadlee took 5/67, and took ten wickets in a match for a record eighth time. 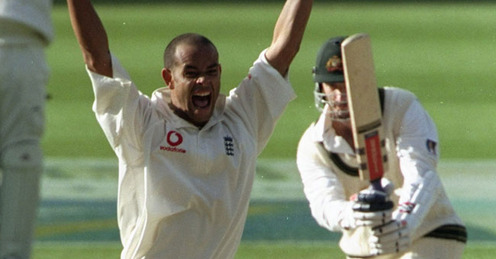 Dean Headley enjoyed the best moment of his career, bowling England to a 12-run win in the 1998-99 Boxing Day Test (source – skysports.com)

Australia, 2-0 up, were marching towards yet another Ashes win when England scripted a rare but much-needed win in the Boxing Day Test, the fourth of the series. Alec Stewart’s 107 and his 119-run fifth-wicket stand with Mark Ramprakash (63) was the highlight of England’s 270 – they lost their last 7 for 70.

Steve Waugh then made an unbeaten 122 in reply, adding 88 for the ninth wicket with Stuart MacGill (43) to help Australia reach 340 from 252/8 (Darren Gough 5/96). England managed 244 in the second innings, courtesy half-centuries from Stewart, Nasser Hussain and Greame Hick (who top-scored with an attacking 60),

Australia were thus left with ample time to get the required 175 runs and wrap up the Ashes again. The openers were dismissed early, but at 103/2 with the scoring rate almost four an over, Australia were on course. Dean Headley, grandson of the great West Indies batsman George Headley, then ripped through the middle order.

From 130/3, the hosts collapsed to 162 all out, losing the last three wickets for just one run – four out of the last five wickets being ducks. Headley took a career-best 6/60, and enjoyed the best moment of his brief 15-Test career. As was expected, Australia won the final Test to win the series 3-1.

Jean-Paul Duminy scored a magnificent 166 to script a memorable win for South Africa in the 2008-09 Boxing Day Test (source – foxsports.com.au)

This was one of South Africa’s most memorable wins, made more special as it ensured a first-ever series win for them in Australia. After winning the first Test at Perth by chasing 414, South Africa’s confidence was high coming into this game.

Batting first, Australia made 394, riding on Ricky Ponting’s 101 and Michael Clarke’s unbeaten 88. Speedster Dale Steyn took 5/87. In reply, South Africa were reduced to 184/7 – with only captain Greame Smith showing resistance with 62 – and later 251/8, when Steyn joined Jean-Paul Duminy for an amazing partnership.

Playing only his second Test, Duminy cracked 166 while Steyn scored 76, as the duo pulverised Australia with a 180-run ninth-wicket stand. South Africa finally scored 459. The deficit for Australia was not too big, but the damage had been done. The South African pacers reduced Australia to 49/3 on the fourth morning, before Ponting’s 99 allowed them to reach 247.