Starting today, arch-rivals India and Pakistan will contest a bilateral series after 5 years. It will be a short series, consisting of only two T20’s and 3 ODIs, but significant nonetheless, as matches between the two nations have been a rarity in recent times – they have played only 4 one-day matches against each other in the last 4 years. In this Specials edition, we look at the five most exciting India-Pakistan one-day matches played, in chronological order:-

This low-scoring match was played when Sharjah was just starting to become a regular ODI venue. Imran Khan was at his deadliest, as he took 6/14 to help bundle India out for just 125 in 42.4 overs. Only Mohammed Azharuddin (47) and captain Kapil Dev (30) crossed 11, the duo adding 46 for the 6th wicket after India were reeling at 34/5 (Imran taking all). In reply, Pakistan had motored along to 35/1 before suddenly disaster struck – all the bowlers kept up the pressure by taking regular wickets, as Pakistan slumped to 41/5, including Javed Miandad and Imran for ducks. Pakistan were still in the hunt at 85/6 with Rameez Raja batting, but his dismissal for 29 signalled the end for his team, as they were rolled over for 87 in the 33rd over. Imran was named Man of the Match, but his teammates let him down hugely. India won the tournament, beating Australia in the final.

The two teams were back at Sharjah the next season  this time contesting the Austral-Asia Cup final. After electing to field, Pakistan bore the brunt of the Indian top order. Kris Srikkanth (75) and Sunil Gavaskar (92) shared a 117-run opening stand, before Gavaskar and Dilip Vengsarkar (50) added another 99 for the 2nd wicket. Vengsarkar’s fall brought about a glut of wickets, as Pakistan fought back to restrict India to 245/7, Wasim Akram taking 3/42.

Pakistan’s reply was scratchy, but Javed Miandad batted on undeterred. He shared a 71 run 5th wicket stand with Salim Malik to rescue Pakistan from 110/4. But India continued to be in command, and the last over, to be bowled by Chetan Sharma, began at 235/7. Two more wickets fell, and finally four runs were needed off the final ball. Sharma bowled a full toss, and Miandad coolly dispatched it for a six to give his team the title and leaving the Indians shell-shocked. Even today, memories of this famous match fills Pakistanis with pride and Indians with regret. 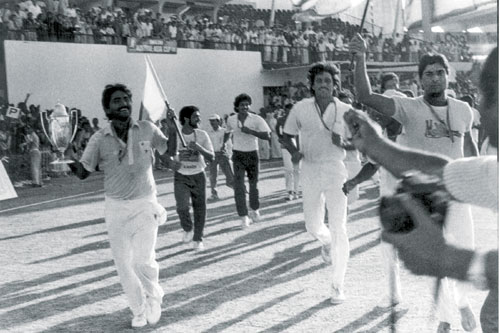 This was the final of a tri-nation tournament (including Bangladesh) to commemorate the home nation’s silver jubilee of independence. The match was a 48-over affair due to bad light. Pakistan, after being put in by India, rode on an attacking 230 run stand for the 3rd wicket between Saeed Anwar and Ijaz Ahmed, who cracked 140 and 117 respectively. Pakistan amassed 314/5 and were favourites to win the trophy at the interval.

But India began their reply at a blistering pace, with openers Sourav Ganguly and Sachin Tendulkar putting on 71 in just 8.2 overs before the latter was out for a quick 41. Robin Singh was promoted to No.3, and the move worked wonders – he scored 82 and added 179 for the 2nd wicket with Ganguly. India then lost 6 for 56, including Ganguly for 124, and began the last over (bowled by Saqlain Mushtaq) at 306/7, needing 9 for a record win. It boiled down to 3 off 2 balls, when Hrishikesh Kanitkar managed to sneak a boundary to ensure India’s victory – it was the highest successful run-chase in ODI’s at that time. 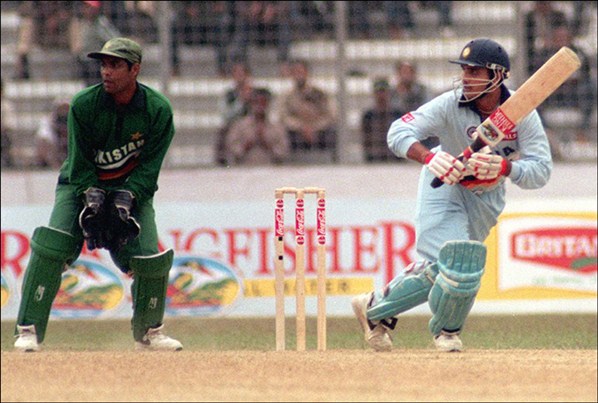 Sourav Ganguly in full flow during his match-winning 124 in the 1997-98 Independence Cup final (source – msn.com)

This was the first match of a historic bilateral series – cricketing ties had resumed between the countries for the first time since 1999. The match was one of the most awaited in recent times, and it lived up to the expectations. Pakistan elected to field, and began to rue the decision as India were placed at a mind-boggling 139/1 in 14 overs, thanks to Virender Sehwag’s assault and the Pakistan bowlers’ tendency to give away extras. Sehwag creamed 79 off 57 balls. The run rate slowed a bit, but Rahul Dravid (99) ensured that the momentum did not slip away, putting on 118 for the 5th wicket with Mohammed Kaif. India ended at a huge score of 349/7.

Pakistan lost its openers early to be 34/2, but the seasoned pros Mohammed Yousuf (then Yousuf Youhana) (73) and captain Inzamam ul-Haq shared a 135 run stand for the 3rd wicket. Inzamam kept up with the scoring rate, putting on 109 for the 4th wicket with Younis Khan. At 278/3 in 42 overs, Pakistan were in with a serious chance of a great win. The target was calmly whittled down, and 9 were needed of the last over. Ashish Nehra bowled beautifully under pressure, and with 6 needed off the last ball, Moin Khan was caught while going for the big one, giving India a thrilling 5 run victory. Inzamam was named Man of the Match for his superb 122 off 102 balls.

Another thrilling match, another Indian win. Pakistan had to win this match to qualify for the final. Salman Butt’s 74 anchored Pakistan’s innings, which was punctuated by regular wickets by the Indians. They finally were bowled out for a competitive 267 in 49.3 overs after an impetus through Kamran Akmal’s rapid 51. Gautam Gambhir led the way for India in the chase, until he was third out for 83 with the score at 180 in the 36th over. After his dismissal, the asking rate began to rise, and India needed 49 off the last 5 overs with 5 wickets left. Suresh Raina took up the challenge, and the equation changed to 16 off the last two overs, and then 7 off the last. Raina was run out off the second ball of the last over for a quick 34, and India needed 6 off 4. With 3 needed off 2, Harbhajan Singh went for the glory shot, dispatching the bowler Mohammed Amir for six to ensure a 3-wicket win for India. India went on to win the tournament  beating hosts Sri Lanka in the final.