This is not the first time that Sachin Tendulkar is going through a rough patch. In fact in the 2005-06, he was shockingly booed at the Wankhede Stadium – his very own home ground, by the very same ‘fans’ who hypocritically call him ‘God’ –  as India sank to a big defeat to England. But that time around, Tendulkar had age on his side. Since 2007, he was in top form until the current slump. However, unlike his previous dips in form, the present one does not seem to have a revival in sight.

No one knows whether this ongoing slump is temporary or permanent, but surely Tendulkar’s international career is on its last legs. There have been ex-players and current players speaking of that ‘one big knock around the corner’, but his woeful form of late has not been helping the cause of the team in any way. And to think that he is bigger than team itself will be absolutely selfish, and knowing Tendulkar’s humility, he would never allow himself to reach such a stage – it is his hunger that is making him delay his retirement. But satiating personal hunger is one thing, contributing towards the team cause is another.

Tendulkar is one of the greatest players cricket has ever seen, and the holder of records which will require a gargantuan task to overhaul. For 23 years, he has served the Indian team and delighted his fans – in India and abroad. Such have been the expectations from this great batsman that earlier even a minor loss of form led to speculation about his future. Yet ironically, now that the bitter truth is slowly dawning upon his fans, they are wanting him to retire ‘whenever he wants to’. This is absurd, because it is the selecting committee that has to make the call eventually – going by reputations alone will never ensure a team’s progress. 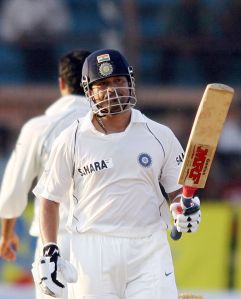 Undoubtedly Tendulkar is a great player, and greater than most other players he has played with. But he is certainly not greater than the team. He is definitely  not ‘God’, as some foolish fans christen him so. He is only human after all, and like all good things in life, his career too has to end sooner or later. Such a legend does not deserve to be accused of ‘being carried by the team’ at this stage of his career – there is a limit to what people can expect from him. The media and the fans have always made the big mistake of highlighting his personal achievements ahead of the team’s cause.

A case in point is the one-day match against Bangladesh at Mirpur  in the Asia Cup earlier this year. Tendulkar finally reached his much-awaited 100th international century – a record that itself is strange, as Test and ODI records are never mixed – they are different games altogether. Tendulkar evidently slowed down while approaching his century due to the undue pressure put on him for almost a year to get this ‘milestone’, and ultimately India put up a smaller total than what they should have on the board.

Bangladesh ended up winning the game and India were on the verge of being knocked out. The media reports the next day left me highly irritated – each of Tendulkar’s hundred centuries were dissected in detail, while India’s loss was given a blink-and-you-miss-it report. It is just not cricket, if the individual is regarded as greater than the team.

Sachin Tendulkar has been a constant in the Indian team for 23 years now, and if he indeed is a great player, he should realise that not all greats go out on a high – look no further than Don Bradman or even Ricky Ponting. True, he feels that he can still contribute to the team, but this self-confidence must not turn into arrogance, especially in the twilight of his career. It will be unfair if one says that he hung on to his place in the team purely on reputation. Before the knives get sharper, Tendulkar should let reality sink in.

Instead of looking for that one last high, he should time his retirement exactly how he played for his country – with dignity and grace.