Australian captain Allan Border said after this match that the result achieved by his team must be the ‘greatest heist since the Great Train Robbery’. And surely, Australia scored a victory which seemed highly improbable throughout the Test.

This was the first match in a three-Test series, played at the Sinhalese Sports Club in Colombo between 17th and 22nd August, 1992. The wily Arjuna Ranatunga put the Australians in and the visitors lost Tom Moody early to become 8/1.

Mark Taylor and David Boon then put on 76 for the second wicket before the innings fell apart. Australia crashed from 84/1 to 124/7, as the bowlers, led by seam bowler Chandika Hathurusingha (4/66), wrecked the middle order.

It was wicketkeeper Ian Healy who revived the innings, sharing stands of 45 runs with Shane Warne and 49 runs with Mike Whitney for the ninth and tenth wickets respectively. Healy’s unbeaten 66 ensured that Australia reached 256, while the hosts ended day one at 9/0.

Sri Lanka took control of the Test on the second day, with Roshan Mahanama stroking 78 and adding 92 for the second wicket with Asanka Gurusinha. Gurusinha and Ranatunga came together at 137/3, and took the score to 265/3 at the end of the day – Gurusinha unbeaten on 87, Ranatunga on 69.

The fact that part-timer Mark Waugh took two of the three wickets to fall on the second day underlined Australia’s bowling struggles. Gurusinha and Ranatunga began to dominate the third day as well, and ended up sharing a fourth-wicket partnership of 230 before the latter departed for a stroke-filled 127.

While the captain was all flair, Gurusinha was all patience as he batted for close to nine hours for his 137 and put on a further 96 for the sixth wicket with debutant wicketkeeper Romesh Kaluwitharana. ‘Kalu’ went on to make a hundred as well, smashing an unbeaten 132 off just 158 balls as Sri Lanka declared at 547/8. Australia finished the day at 26/0, still 265 runs behind.

The Australian second innings was all about chipping in as a collective unit. Six batsmen crossed a score of 40 but none went beyond 68. In addition, there were an enormous number of extras – 58 to be precise, including a criminal 34 no-balls – to swell up the total. There were no hundred-run partnerships, but five over 40.

The visitors, who ended day four at 393/7, finally finished at 471 early on the final day. David Boon (68), Greg Matthews (64), Dean Jones (57) and Mark Waugh (56) were the top-scorers, besides Mr. Extras of course. Not to mention a gutsy show from the lower order and the tail, which propped up the total after Australia were 269/5 at one point.

Despite Australia’s determined showing in the second attempt, Sri Lanka’s target was only 181 from 58 overs. And the Lankans looked on course for an easy victory after the openers Mahanama and Hathurusinghe shared a 76-run stand. The chase was still going along smoothly at 127/2, when Aravinda de Silva was dismissed.

With 54 runs needed from nearly 25 overs, De Silva, who had raced to 37 from 32 balls with seven fours, attempted to strike McDermott over Border at mid-on. Border, at full stretch, ran 25 metres with the flight of the ball and held a magnificent catch over his shoulder. From then on, Australia looked a different team, and so did Sri Lanka.

Ranatunga was removed for a duck, while off spinner Matthews (4/76 in the innings, 7/167 in the match) clean bowled both Marvan Atapattu and Kaluwitharana cheaply to reduce Sri Lanka to 137/6. The tables had suddenly turned and the chase was getting tougher by the ball.

Gurusinha, who came in number three, watched helplessly as wickets tumbled at the other end in a sensational collapse. Shane Warne (3/11) then claimed the last three wickets in 13 balls without conceding a run as the 10000-strong crowd watched in horror. 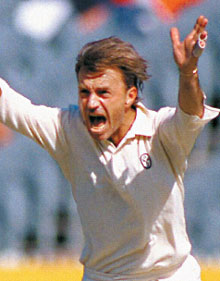 Greg Matthews put in an important all-round show to inspire his side to a win (source – topnews.in)

Sri Lanka were bowled out for 164 with 6.5 overs to spare, falling 17 runs short of victory. They lost the last eight wickets for a measly 37 runs, even as Gurusinha was stranded on 31 not out. Matthews was named man of the match for his all-round display.

Australia had pulled off a 16-run win despite trailing by 291 on the first innings, and Border’s post-match statement was indeed a true reflection of the game. This could have been Sri Lanka’s third Test victory and arguably their most famous. However shoddy bowling and shocking batting in the second innings brought about their downfall.

Sri Lanka’s lead of 291 remains the highest for a losing team in Test history. Worse still for the hosts, this result ensured a 1-0 series win for Australia, as the next two Tests were drawn. Sri Lanka had to wait till 1999-00 to secure their first match and series win over the Aussies.

As for Australia, it was one of the greatest turnarounds ever seen in a Test. Only once before had they won a Test after trailing by more than 200 on the first innings – at Durban in 1949-50, they beat South Africa by five wickets despite being bowled out for 75 in response to 311.