Pakistan’s 13th Test tour of New Zealand is underway, with the first of two Tests having been played at the Hagley Oval in Christchurch. New Zealand has been a happy hunting ground for Pakistani teams over the years – prior to the start of the ongoing series, they have won ten and lost five of the 29 Tests they have played there.

Overall, the two sides have met 53 times, with Pakistan winning 24 matches to New Zealand’s eight. New Zealand have won only two series against Pakistan, and the latest of them came 32 years ago. In this post, we relive five of the best Test matches played between the two teams, in chronological order.

Pakistan had beaten New Zealand at home in December 1984, and found themselves southbound for a return series the very next month. New Zealand were up 1-0 coming into this final Test of the rubber at Carisbrook. The second Test at Auckland had seen the debut of Wasim Akram, who would go on to become the most successful visiting bowler in New Zealand.

Pakistan’s first-innings total of 274 was built around a third-wicket stand of 141 between Qasim Umar (96) and captain Javed Miandad (79). The last eight wickets fell for just 33, with Richard Hadlee (6/51) doing the bulk of the damage. The 18-year-old Wasim then showed the first glimpse of his fast bowling prowess, taking 5/56 to help bowl New Zealand out for 220.

Umar top-scored for the visitors in the second dig as well, compiling  a solid 89 that aided in a recovery from 76/4 to 223. Set 278 to win, New Zealand were in disarray at 23/4 as the top order caved in to Wasim. Martin Crowe (84) and Jeremy Coney staged a remarkable comeback, putting on 157 for the fifth wicket.

Yet, at 228/8, Pakistan were in pole position to level the series. Coney, who remained unbeaten on a lionhearted 111, and Ewan Chatfield however put paid to the visitors’ hopes – they added 50* to script a two-wicket win for their side. Wasim grabbed 5/72 to return a haul of 10/128 and earned the man of the match award. This remains New Zealand’s only series win at home against Pakistan. 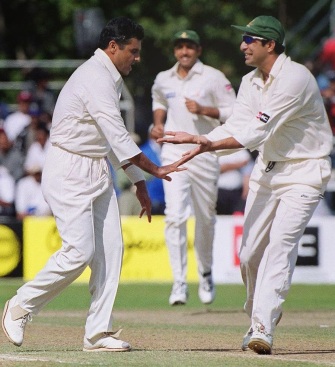 Waqar Younis (left) and Wasim Akram combined to bowl Pakistan to a sensational win at Hamilton in 1992-93 (source – wellpitched.com)

A brilliant exhibition of pace bowling handed Pakistan an extraordinary victory in this one-off Test at Seddon Park. New Zealand started on a bright note – they reduced Pakistan to 12/3 after winning the toss. Skipper Miandad came to the rescue with 92, with the eventual total being a respectable 216. Left-arm pacer Murphy Su’a returned a career-best 5/73.

In reply, the hosts rode on a sedulous century from opener Mark Greatbatch. He showed great application, batting for seven hours in making 133 – more than half of the team total of 264 – and shared in an opening stand of 108 with Blair Hartland. Wasim and Waqar Younis served an appetiser of what was still to come, by sharing seven wickets between them.

Bolstered by New Zealand’s valuable lead of 48, Danny Morrison (5/41) jolted the top order early on the third day. Inzamam-ul-Haq rose to the challenge, as he uplifted his team from the pits of 39/5 with a pugnacious 75. His partnership with Rashid Latif, worth 80 for the sixth wicket, carried Pakistan to 174. New Zealand faced a routine target of 127 with more than two days left.

Wasim ensured that the chase had a dicey start, as he pinched three cheap wickets to leave New Zealand at 39/3 at the end of day three. As the fourth day commenced after a rain delay, Andrew Jones and Adam Parore battled to take the score to 65/3 before Younis removed the former. Wasim soon sent Parore back, and suddenly the road to the target was looking arduous.

From that point onward, it was mayhem – Wasim (5/45) and Waqar (5/22) combined to produce a breathtaking effort, rendering the Kiwis helpless with their combative pace and deadly swing. New Zealand lost 7 for 28 to capitulate to 93 all out; Mr. Extras top-scoring with 22. Waqar, playing his 20th Test, also reached the 100-wicket mark during his spell.

Pakistan had already secured the series after comprehensive wins at Auckland and Wellington. The two Ws – Wasim and Waqar – proved to be New Zealand’s nemeses yet again in the first two Tests, bagging 20 and 11 wickets respectively. However, New Zealand salvaged pride at Lancaster Park, achieving a record five-wicket win early on the final day. 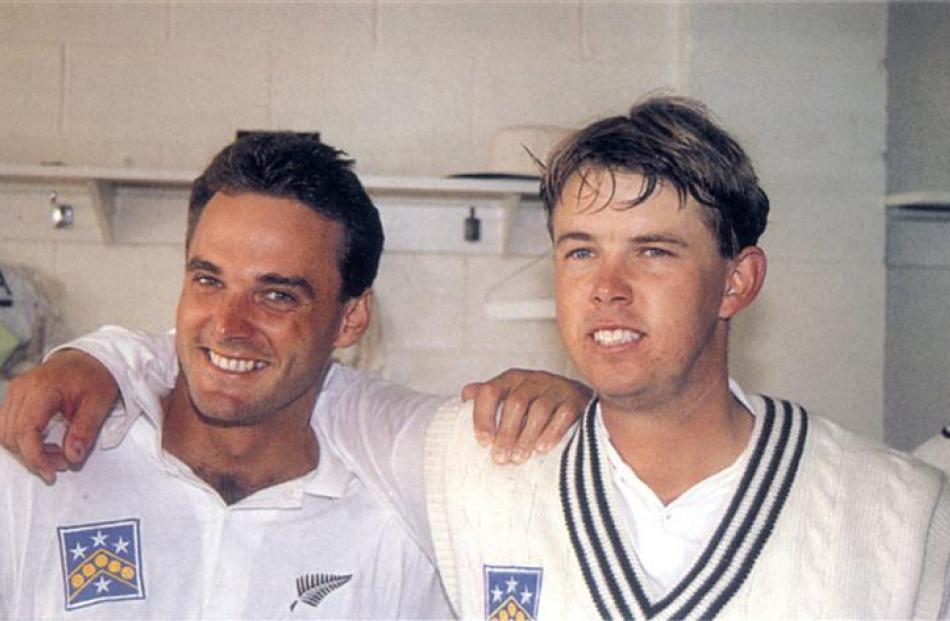 Openers Saeed Anwar (69) and Aamir Sohail (60) laid a strong platform for Pakistan by adding 125 runs, before Basit Ali (103) continued the good work, racing to his first and only Test hundred. The visitors accumulated a robust 344 on the board and New Zealand had their task cut out.

The hosts were going well at 109/1 with Andrew Jones (81) looking in fine fettle, but Waqar, not for the first time, inspired a collapse that gave Pakistan a first-innings cushion of 144. The ‘Burewala Express’ sped to a return of 6/78. Pakistan themselves folded for 179 on the third day, failing to recover from 53/4 despite Basit’s 67. Morrison took 4/66, extending his match analysis to 8/171.

New Zealand were thus set 324 to win with more than two days still available. Opener Bryan Young dropped anchor at one end, but Pakistan were firm favourites at 133/4. Shane Thomson came in at number six, and went on to share in a match-winning partnership of 154 with Young. Both ultimately reached their maiden Test hundreds.

While Young was out for 120, Thomson remained unbeaten on the same score, steering New Zealand to their highest successful Test chase. They played contrasting innings – Young batted for nearly seven hours, soaking the pressure, whereas Thomson struck at 72 runs per 100 balls. The duo adeptly negated the threat of Wasim and Waqar and were successful in denying Pakistan a clean sweep.

New Zealand began the series with a rare success in Pakistan – they had won only once before in the country, which was also at the Gaddafi Stadium, during their first ever series win in 1969-70. Moreover, they ended a barren run of 15 winless Tests – eight defeats and seven draws – over the last two years.

Wasim, who was now the captain, missed the match due to a shoulder injury and Saeed Anwar took over in his stead. Lee Germon called correctly, but his team’s batsmen could not cope with the low bounce of the pitch. New Zealand crashed to 83/6 and on to 155 all out, with Waqar and leg-spinner Mushtaq Ahmed taking four wickets apiece.

However, towards the end of the first day, New Zealand were right back in the contest after having reduced the hosts to 37/5. Medium pacer Simon Doull was the wrecker-in-chief as he made short work of the the top order, eventually ending with figures of 5/46. A spunky 59 from Moin Khan revived the innings to an extent and ensured a narrow lead of 36 for his team.

In the second innings, New Zealand were in a worrying position of 101/5 early on the third day. Ahmed was proving to be difficult to negotiate, until Chris Cairns joined Stephen Fleming. They stitched together 141 for the sixth wicket to turn the game around. Fleming scored 92*, while Cairns hit 93 at better than a run a ball. When on seven, Cairns was dropped by Inzamam at gully.

The University Oval witnessed an exciting Test match that had its share of twists and turns. Pakistan’s pace attack had done well to have New Zealand at 211/6, before Brendon McCullum (78) and captain Daniel Vettori (99) took charge with a seventh-wicket stand worth 164. Earlier, Martin Guptill (60) and Ross Taylor put on 117 for the third wicket.

These efforts enabled New Zealand to swell their total to 429. Pakistan began poorly in reply, slipping to 85/5 courtesy of some fine bowling from speedster Shane Bond (5/107). Umar Akmal, aged 19, who went on to score a breezy 129 on debut, joined forces with his elder brother Kamran (82). The pair added a vital 176 for the sixth wicket, boosting Pakistan’s total to 332.

Pakistan’s pacemen delivered timely blows in the second innings as well, and this time there was no lower-order fightback. Only Taylor (59) showed up as New Zealand were bundled out for 153 early on the final day, thus setting up an interesting chase. Mohammad Asif took 4/43, giving himself 8/151 in the match. Pakistan required 251 for victory.

Bond and Chris Martin had Pakistan at 24/3 before Umar Akmal (75) put his hand up again. He shared in stands of 71 with captain Mohammad Yousuf for the fourth wicket and 66 with Shoaib Malik for the fifth. But at 195/5, he was caught and bowled by Bond (who had a match haul of 8/153 in what was his last Test). The last five wickets fell for just 23, leaving New Zealand victors by 32 runs.