Tasmania got its first taste of Test cricket in December 1989, when Hobart’s Bellerive Oval hosted the second Test between Australia and Sri Lanka. Since then, the ground has been an occasional fixture on the Australian Test calendar, having hosted a total of 12 Tests – four against New Zealand, three each against Pakistan and Sri Lanka, and two against the West Indies.

Australia’s record at the ground, which is also known as the Blundstone Arena, is impressive – they have won nine games and lost just once. With South Africa – who are making their maiden appearance in Hobart – taking on the hosts in the second Test of their ongoing series, let us look back at five memorable matches played at this venue, in chronological order.

This match marked the Test debut of the Bellerive Oval, which had hosted an ODI each in the previous two seasons. Sri Lanka came into this final Test of the series on the back of a confidence-boosting draw at the Gabba, where they took the first-innings lead thanks Aravinda de Silva’s 167.

Fast-medium pace bowler Rumesh Ratnayake produced an excellent spell of 6/66 as Australia were bowled out for 224 on the first day after being inserted by Arjuna Ranatunga. No batsman could manage a fifty. Sri Lanka crashed to 18/3 in reply before de Silva (75) joined forces with Roshan Mahanama (85) to share in a stand of 128 for the fourth wicket.

However, the visitors lost their last six wickets for just 28, thus conceding a narrow lead of eight runs. After an eventful second day, Australia were 25/2 in their second innings and the match seemed to be heading towards an exciting conclusion. But the Australian batsmen had other ideas as they went about piling the runs in right earnest.

While Mark Taylor (108) and captain Allan Border (85) added 163 for the fourth wicket to put their team in the driver’s seat, Dean Jones (118*) and Steve Waugh (134*) ensured that the innings went into overdrive mode with an unbroken sixth-wicket partnership of 260 at 4.5 an over. The declaration came at 513/5, leaving Sri Lanka with a target of 522.

Sri Lanka put up a brave fight, but it was never going to be enough. Resuming the final day at 166/3, they were bowled out for 348 in the final session after losing their last four wickets for 16. De Silva, who was rightly named man of the series, starred again with 72, while Ravi Ratnayake top-scored with 75. Merv Hughes led the way for the hosts with 5/88. 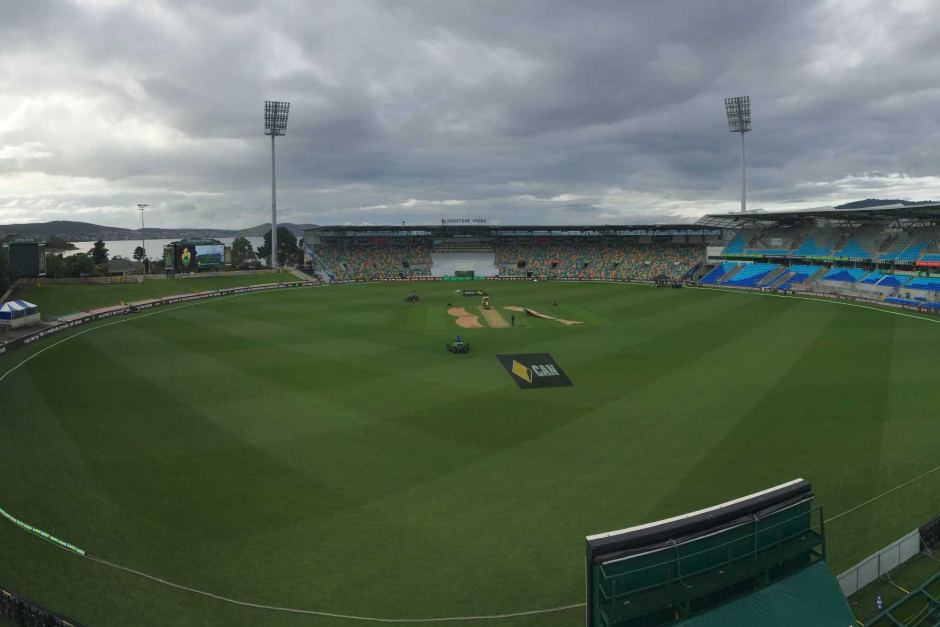 The Bellerive Oval in Hobart has hosted 12 Test matches since 1989-90, of which Australia have won nine and lost only one (source – abc.net.au)

Australia had sealed the series with convincing wins at Brisbane and Perth, and nearly made it three out of three at Hobart. In what was a rain-affected Test, Australia totalled 400 after batting first. The cornerstone of the innings was a second-wicket stand of 197 between Matthew Elliott (114) and Greg Blewett (99). Mark Waugh chipped in with 81.

With the match petering out to a draw, Stephen Fleming dangled the carrot in front of the Australians late on the fourth day. The New Zealand captain declared his team’s first innings at 251/6, in which Matthew Horne (133) was the standout performer with a maiden Test ton. Host captain Mark Taylor himself declared at 138/2 at lunch on the final day.

Two sessions now remained in the match, with New Zealand needing 288 runs to win and Australia ten wickets. The Kiwis got off to a flyer, with openers Horne and Nathan Astle blasting 72 off 52 balls. It was too good to last though, as the score quickly slid to 95/4. Shane Warne was coming into his own and the visitors thought it wise to give up their victory hopes.

Adam Parore and Roger Twose had almost steered their team to safety with a seventh-wicket stand of 66, but a final twist was in store. Three wickets fell for six runs and New Zealand had only one wicket in the bank with 38 minutes to play. A whitewash was narrowly averted as the last pair of Simon Doull and Shane O’Connor defied the wiles of Warne (5/88), the innings ending at 223/9.

After clinching a ten-wicket win in the series opener, Australia looked certain to lose before an amazing last-day fightback from Justin Langer and Adam Gilchrist gave them a famous win. Steve Waugh inserted Pakistan in and his bowlers did not disappoint, limiting the total to 222. Opener Mohammed Wasim made an attacking 91.

In reply, Australia were in a commanding position at 191/1 with Michael Slater (97) and Langer (59) in ominous form. But Pakistan somehow conjured a comeback, guided by off-spinner Saqlain Mushtaq (6/46). Australia were dismissed for 246, losing their last eight wickets for 40.Pakistan then took control of the game with a solid batting display in the second innings. 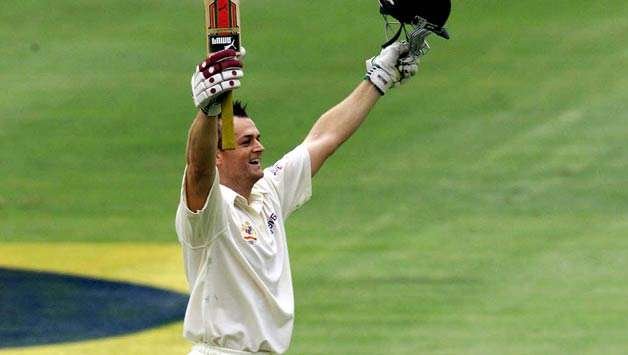 Playing only his second Test, Adam Gilchrist smashed 149* off 163 balls to help Australia chase down 369 against Pakistan in 1999-00 (source – yahoocricket)

They began the final day at 188/5 and Pakistan were well on top. But the overnight batsmen, Langer and Gilchrist, were not deterred and went on to add a record 238 runs for the sixth wicket. While Langer made a solid 127, it was Gilchrist’s assault that jolted Pakistan. The wicket-keeper cracked an unbeaten 149 off 163 balls – a marvellous knock given the situation.

The Australians eventually reached 369/6 – then the third-highest fourth-innings victory chase – as Pakistan were left to rue their misfortune. There was controversy early on the final morning, when Langer appeared to have been wrongly reprieved following a caught-behind appeal off captain Wasim Akram. Australia went on to sweep the series 3-0.

Australia won the two-Test series 2-0, but not before Sri Lanka made a valiant attempt to chase down a massive target. The home batsmen put the Sri Lankan bowling attack to the sword after winning the toss, amassing 542/5 before Ricky Ponting decided that they had batted enough.

Opener Phil Jaques struck a career-best 150, and was involved in a third-wicket partnership of 152 with Michael Hussey, who made 132. Michael Clarke, Andrew Symonds and Adam Gilchrist hit brisk fifties to further put Sri Lanka under the pump. Captain Mahela Jayawardene stood up to the task by scoring 104, but his side faced a deficit of 296 after the first innings.

Australia opted to bat again and galloped to 210/2, declaring before lunch on the fourth day. Marvan Atapattu (80) and Kumar Sangakkara showed resolve in pursuit of an unlikely 507, as they put on 143 for the second wicket. Sangakkara was looking in great touch and ended the day at 109*, Sri Lanka’s score reading 247/3.

Australia, hungry for their 14th successive Test match win, wrested the initiative on the fifth day, sparking a collapse to send Sri Lanka from 265/3 to 290/8 even as Sangakkara batted on with assurance. The ninth wicket fetched 74 runs, as Sangakkara and Lasith Malinga engaged in an entertaining counterattack.

Only a poor umpiring decision stopped Sangakkara from reaching his seventh double hundred, as he was adjudged out for a brilliant 192 after the ball deflected from his shoulder and hit the helmet before being snapped in the slips. Sri Lanka were eventually dismissed for 410. Brett Lee, who was named man of the match and series, finished with 4/87, taking his match figures to 8/169.

Doug Bracewell celebrates a wicket at Hobart in 2011-12 even as David Warner looks on. New Zealand won a thriller by just seven runs (source – pakistantoday.com.pk)

Coming into this match, Australia were favourites to take the rubber after an easy nine-wicket win in the first Test. Michael Clarke had no hesitation in putting New Zealand in to bat on a grassy wicket. The hosts’ pace trio of James Pattinson (5/51), Peter Siddle and Mitchell Starc proceeded to destroy New Zealand’s top order – they crashed to 60/6 in the first session itself.

Dean Brownlie stemmed the rot with a gutsy 56 from number six. He shepherded the tail and was the only one to cross 20. The innings wound up at 150 before the first day ended prematurely due to rain, Australia being 12/1. The second day was again dominated by the bowlers as the Australian batsmen failed to cope with the visiting bowlers’ pace and swing.

The batting order imploded as the score slid to 75/7. Chris Martin, Trent Boult and Doug Bracewell took three wickets each. It took a 56-run stand for the eighth wicket between Siddle and Pattinson to revive the final total to 136. With New Zealand leading by just 14, the Test was now akin to a second-dig shootout. They lost their top three with 73 on the board in the second innings.

Captain Ross Taylor steadied the ship, scoring 56. From 171/4, New Zealand regressed to 226 all out, which left Australia with seven sessions to score 241. By stumps on the third day, openers Phil Hughes and David Warner cruised to 72/0, thus providing the perfect start to the chase. At 159/2 and with Warner and Ricky Ponting in the middle, the game was Australia’s to lose.

However, 21-year-old Bracewell, playing only his third Test, went on to bowl a game-changing spell. He finished with 6/40, scalping Ponting, Clarke and Michael Hussey – the latter two in successive balls – even as Warner fought on. Three wickets had fallen for no run and the game was wide open. Except for Warner, no batsman crossed 23.

Another catastrophic slide from 192/5 to 199/9 seemed to be the final blow for the hosts. But Warner, who carried his bat in vain for 123 off 170 balls, and Lyon added 34 to ignite hope among the spectators before Bracewell castled Lyon with tea approaching to script a seven-run win for New Zealand – their first against Australia in 19 years.