The West Indies were scheduled to tour Australia for a much-awaited Test series just four months after winning the inaugural World Cup in England in 1975. Australia, led by Ian Chappell, had been their opponents in the World Cup final at Lord’s, a memorable match that ended in a 17-run win for Clive Lloyd’s men.

As was to transpire, Australia more than made up for the disappointment with a thumping 5-1 win in the six-Test series to retain the Frank Worrell Trophy. However, before that, the West Indian contingent created history by becoming the first international team to tour and play against Papua New Guinea, who were awarded ICC Associate status in 1973.

It had barely been a month since Papua New Guinea derived independence after 70 years of Australian rule, and the arrival of the star-studded team from the Caribbean – World Cup champions, no less – was undoubtedly a massive event for its cricketing fraternity as also for the public at large. An enthusiastic crowd gathered for the two one-day matches played.

The West Indies first took on a Papua New Guinea Combined XI in a 25-overs-a-side match, played in the city of Lae on October 22, 1975. After the home captain Richard Unsworth called correctly, Antiguan pace ace Andy Roberts tested the batsmen with a quality spell – he conceded only four runs in his three overs and also took the wicket of opener Murray Day.

Day’s fellow opener Nigel Agonia decided to dig in and batted throughout the innings for 36*, and was well supported by Unsworth (23) and C. Salmon (28). The hosts managed a respectable total of 107/3, after which S. Amos gave them a good start in reply by removing the dangerous Gordon Greenidge for a duck. But Roy Fredericks (31) and Alvin Kallicharan (38) ensured that the run rate was not hampered.

A video showing glimpses of the West Indians’ first match in Papua New Guinea, against a PNG Combined XI at Lae

The final impetus was given by Vivian Richards, then a 23-year-old who had made his international debut the previous year. Richards came in at 70/4 and top-scored with a brisk 45. The West Indians sportingly batted on after reaching their target for the loss of four wickets and finished at 177/8. Sam Malum, a 19-year-old medium pacer, impressed with a return of 3/36, including the wickets of Fredericks and Lawrence Rowe.

The West Indians then travelled to the capital city of Port Moresby next day to face the Papua New Guinea national team in a 40-over match at Amini Park. The tourists fielded first again, and their experienced bowling attack was too much to handle for the hosts’ top order. Bernard Julien began the damage by taking the wicket of Taunao Vai with only eight on the board.

A run later, Roberts sent back S. Woodger before the legendary 41-year-old veteran Lance Gibbs – holder of the record for the most Test wickets – produced a double strike with the wickets of Agonia and captain G. Wolstenholme. The run out of K. Byrne did not help Papua New Guinea’s cause, and they were now tottering at 33/5.

Richards too got among the wickets as he had Ilinome Tarua LBW to make it 49/6. The West Indian bowling was penetrative and their fieldwork efficient, and Papua New Guinea ran the risk of being bowled out under 100. It was turning out to be the perfect warm-up for Lloyd’s team before they entered the cauldron of Australia.

A mini revival came in the form of a seventh-wicket partnership between wicketkeeper Lou Ao and the India-born Charles Harrison. The duo put on 46 before part-timer Kallicharan’s off-spin got rid of Harrison for 34, the top score of the innings. Ao remained unbeaten on 30 as Papua New Guinea mustered 115/8 from the reduced 35 overs.

Greenidge was out cheaply again, courtesy a catch by Kila Alewa off Michael Willard. But Fredericks was in an attacking mood at the other end, and at 46/1, the West Indians were seemingly waltzing towards the modest target. However, the next three wickets fell for seven runs, leaving the locals excited. 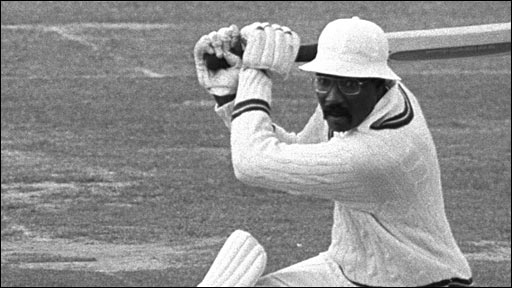 Captain Clive Lloyd scored 88 for the West Indians in their match against Papua New Guinea at Amini Park, ahead of the Test series in Australia

Harrison built on his batting display by castling Rowe and then having Kallicharan caught by Wolstenholme, while K. Kalo saw the back of wicketkeeper David Murray, who batted at number four in a rejigged batting order. The West Indians were suddenly 53/4 and not exactly out of the woods.

Lloyd walked in at the fall of the fourth wicket and immediately imposed his authority on the proceedings. Harrison, who finished with a neat 3/36, soon took his third wicket in the form of Fredericks (35), and when Willard nailed the big scalp of Richards, the West Indians were 97/6 and still 19 short of victory.

Lloyd and Julien (35) ensured that there were no further hiccups in store as they calmly knocked off the remaining runs to seal a four-wicket win for their team. The West Indians again decided to bat on, until they were bowled out – they ultimately scored 201 in 31 overs. Lloyd led from the front, entertaining the crowd with a knock of 88.

The significant aspect of this match was that Papua New Guinea’s eleven consisted of six indigenous players, and from hereon, indigenous players began to dominate the national team. Having their skills tested against the World Cup holders was an invaluable experience as they strove to become a competitive unit.

The visit of a champion cricket team indeed meant a great deal for the newly-independent nation. Four years later, the Barramundis played in the ICC Trophy for the first time, where they failed to progress beyond the first round. In the next edition in 1982, they gave a highly commendable performance by finishing third.

Papua New Guinea played their first List A match in 2005, against the Netherlands at Belfast in the ICC Trophy. They had to wait for nearly a decade before gaining ODI status, and created history by becoming the first nation to win its first two ODIs. They also won their maiden first-class match, in the Netherlands in 2015.