Coming into this five-match series, New Zealand had not played Test cricket for nearly three years. They had lost ten consecutive series dating back to 1950-51 and had won just one Test in 32 years and 52 attempts – against the West Indies at Auckland in 1955-56.

New Zealand’s first tour of South Africa in 1953-54 was a hard lesson learnt as they went down 4-0, salvaging only a draw to avoid being whitewashed. That tour is best remembered for New Zealand’s valiance, spurred by a determined Bert Sutcliffe, in the emotionally-charged Johannesburg Test.

The first Test of the 1961-62 series at Durban was a close affair, with the hosts prevailing by 30 runs. South African captain Jackie McGlew carried his bat for 127* to guide his side to a first-innings lead of 47. New Zealand were eventually set 197 to win, but they succumbed to Peter Pollock, who took 6/38.

New Zealand’s performance in the Durban Test underlined that they were not going to go down without a fight, and so it proved as the series wore on. The second Test at Johannesburg was drawn, which meant that South Africa held a 1-0 lead when the teams arrived at Newlands for the crucial New Year’s Test on the first day of 1962.

Graham Dowling, who had debuted at Johannesburg, fell without scoring to the tall paceman Godfrey ‘Goofy’ Lawrence soon after John Reid had elected to bat. However, his fellow opener Noel McGregor (68) laid a solid platform for the middle order to capitalise on. When he was bowled for 68 by debutant Sydney Burke, the score read 116/3.

Reid was joined by Zin Harris and the two turned the tide towards New Zealand with a fourth-wicket partnership of 93. Reid scored an attacking 92 before slow left-armer Atholl McKinnon scalped him short of a well-deserved century. Harris was unperturbed by his captain’s loss and found an equally ambitious partner in Murray Chapple.

Harris and Murray calmly went about their task on a harmless pitch as the South Africans failed to find a way through their alliance. Harris was unbeaten on 91 when stumps were drawn with New Zealand in the ascendancy at 337/4. He circumspectly inched to his first and only Test hundred the following day.

Burke used his medium pace to great effect on the second morning and was instrumental in sparking a New Zealand collapse. He had Chapple caught behind by John Waite for 69, which ended the fifth-wicket stand of 148. Waite had a good time behind the wicket as he also stumped Harris for 101 (ten fours and two sixes) off Harry Bromfield soon after. 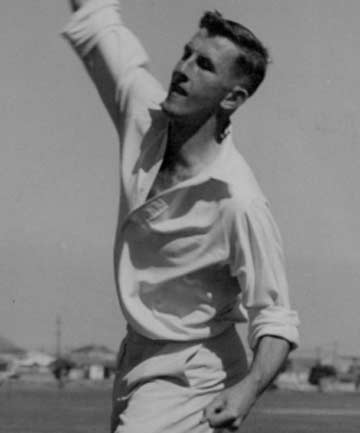 The lower order and tail were quickly dismantled thanks to Burke, who bowled his heart out to finish with 6/128 in 53.5 overs. New Zealand’s innings terminated at 385, a total they would have taken at the start, even though they lost their last six wickets for 28. This being a four-day Test, the follow-on mark for the hosts was 236.

Openers McGlew and Eddie Barlow began soundly before Dick Motz took the important wicket of the home captain. Barlow seemed to be in his element, but leg-spinner Jack Alabaster had him caught by Harris for 51, the South African score now a potentially thorny 85/3.

Clever bowling supported by quality fielding ensured that South Africa kept losing wickets before any substantial partnership could find its feet. Waite attempted to solidify the innings, but his dismissal at 157/4 triggered a slide of 6 for 33. The wreckers-in-chief were medium pacer Francis Cameron and Alabaster.

Cameron delivered a fine performance as he returned a haul of 5/48. Alabaster, who has to be credited with denting the top order early, was equally effective with figures of 4/61. South Africa could muster only 190 in the face of their combination, and Reid had to decide whether to enforce the follow-on – then a rarity for a New Zealand captain.

The New Zealand think-tank eventually opted to bat again, ostensibly because it would have been a risk batting last on a wicket expected to turn on the final day. The visitors ended the second day at 8/0 in their second innings and with a lead of 193 – by all means a highly secure position.

Burke was at it again in the second innings, this time rattling the top order to renew South African hopes. His in-swinger was particularly fruitful as New Zealand wobbled to 44/3 and later to 127/6. Four batsmen from the top seven crossed 20, but none went further than 33. Burke had by now collected his second five-wicket haul.

Wicketkeeper Artie Dick, who came in at number eight, ended up as the top scorer of the innings with an unbeaten 50 – his only Test fifty – that enabled his team to swell the lead. He dominated in an unbroken tenth-wicket stand of 49 with Cameron, much to the frustration of the hosts, before Reid declared at 212/9.

South Africa were hampered by an injury to Lawrence, which meant that Burke had to bowl more than he would have expected. Yet, he recorded figures of 5/68, giving him a remarkable 11/196 from 81 overs in the match. This is the second-best return by a South African on Test debut, after Alf Hall’s 11/112 against England at the same venue in 1922-23.

South Africa’s target was a daunting 407 with about eight hours of play left in the Test. There was more bad news in store for the hosts as McGlew was admitted to hospital after sustaining a finger injury, the score being 11/0 at this stage. Alabaster soon took the wickets of Barlow and Buster Farrer to reduce the score to 54/2 at stumps.

Captain John Reid contributed to New Zealand’s first away win with 92 runs in the first innings and two vital wickets in the second (source – wikia.com)

Roy McLean, batting at number four, began signalling his intent to keep sniffing at the target early on the final day. Alabaster added a third wicket to his tally when he removed Waite to make the score 100/3, but McLean mixed caution with aggression and gave Reid plenty to ponder about.

McGlew returned at the fall of the third wicket to fight for his team, and a partnership worth 101 ensued between him and McLean. The duo steadily progressed in the middle, and at 201/3, the match was heading towards a climax. It was fast bowler Gary Bartlett who broke through, having McGlew caught behind for a gritty 63.

The pitch was still easy to bat on and until New Zealand saw the back of McLean, they could not have afforded to rest. McLean kept the chase alive in the company of Colin Bland; their partnership realised a further 72 runs for the fifth wicket. 134 runs to win, six wickets in hand was the delicate equation at this stage.

Bartlett did the star turn again, inducing McLean – who hit his fifth Test ton – into a hook that landed into the hands of Harris. In less than three hours, McLean produced a knock of 113 (18 fours and a six) that had given South Africa a real chance of a historic win – no team had chased down these many runs to win a Test.

However, McLean’s dismissal signified another momentum shift. Bland battled on, his partnership with Kim Elgie mopping another 42 runs off target, before Cameron dismissed Elgie, and just two runs later, Reid had Bland LBW for 42. South Africa’s batting ammunition had been extinguished, the score now 317/7.

The end was quick, with the last three wickets falling for only four runs. Though Alabaster was the pick of the bowlers with 4/119 (8/180 in the match), Bartlett and Reid, with two wickets apiece, had provided the vital scalps. Reid fittingly took the final wicket, that of Lawrence, as South Africa were bowled out for 335 to give New Zealand a 72-run win.

New Zealand thus recorded their first ever overseas Test match triumph. It had taken a long time coming – a run of 30 winless overseas Tests in as many years was finally broken with a convincing all-round display. South Africa’s brave final-day attempt was not enough as the target proved to be a bit too much for their liking.

South Africa bounced back in the fourth Test at Johannesburg, winning by an innings and 51 runs, before New Zealand levelled for the second time in the series with a 40-run win in the fifth Test at Port Elizabeth. The final result of 2-2 was a fair reflection of a well-fought Test series.