Ireland are set to take on World Cup champions Australia in a much-awaited one-off ODI match at the Civil Service Cricket Club ground in Belfast in two days’ time. This will be only the second ODI on Irish soil this summer, the first being an abandoned game against England in May.

Thursday’s match will be Australia’s third ODI in Ireland after having played once each in 2010 and 2012. While the 2012 match in Belfast lasted just 10.4 overs before rain played spoilsport, the 2010 meeting at Dublin resulted in a narrow win for Australia.

As is the case today, Australia were the defending World Cup champions back in 2010 as well and that too for eleven years running. The ODI against Ireland, played at the Clontarf Cricket Club ground on June 17, was a precursor to Australia’s five-match ODI series in England.

Coming into this match, Australia had notched nine successive ODI series wins in the past year, which included the 2009 Champions Trophy. Ireland on the other hand had played just one ODI in the last ten months – against the West Indies at Kingston. In the 2009 season, they had fell short by just three runs against England at Belfast.

Ireland of course had gained the reputation of ‘giant killers’ after their memorable 2007 World Cup campaign during which they beat Pakistan and Bangladesh and tied with Zimbabwe. Their narrow defeat to England in 2009 further showed that they were not a team to be taken lightly, especially in home conditions.

This was Ireland’s second ODI against Australia, the first being in the 2007 World Cup at Bridgetown, where they were rolled over for just 91 en route a thumping nine-wicket defeat. Slightly overcast weather and packed stands greeted the teams in a match largely considered as a ‘warm-up’ for Australia before they faced England.

Ricky Ponting won the toss and decided to bat on a sluggish pitch conducive to the Irish medium pacers. The batsmen’s rustiness was evident as they failed to get on top of a disciplined Irish attack. Shane Watson departed in as early as the fifth over, edging one to wicketkeeper Gary Wilson off Boyd Rankin (2/45) with the score at 20.

Wicketkeeper Tim Paine and Ponting combined for a second-wicket stand of 66, but the run rate stayed below four an over. With the score at 86, Paul Stirling’s part-time off-spin got rid of Ponting as the star batsman found Andrew White at deep mid wicket. In the very next over, Michael Clarke was out stumped for a duck off Alex Cusack (2/38).

Clarke’s dismissal was a close call but the doubt could not be clarified – there was no third umpire for this match. Australia were now 86/3 and had to rebuild the innings. Paine found support in Cameron White and the pair steadily revived their team with a fourth-wicket partnership of 62 before White fell to Stirling (2/34) for 42.

Australia battled to 162/4 as the final ten overs began, the ground now blazing in sunshine. In the 44th over, the O’Brien brothers combined to dislodge Paine – the batsman clipped a Kevin O’Brien delivery that went straight to Niall O’Brien at mid wicket. The reliable Michael Hussey too fell in exactly the same mode two overs later.

Nathan Hauritz struck a few meaty blows at the death as Australia collected 21 from the final three overs. He became the third consecutive batsman to fall to a ‘c. O’Brien, b. O’Brien’ dismissal. The final total was an uninspiring 231/9, with Paine top-scoring with a patient 81 off 122 balls which included five fours and two sixes.

Ireland’s tidy bowling reflected in the scorecard as only one bowler went for more than 4.5 an over. Kevin O’Brien was the pick with 3/43 off his ten overs while Rankin, Cusack and Stirling all scalped two wickets each.

There was genuine optimism among the locals as the chase began – the moderate target was certainly attainable. Soon, the Australian bowlers were at the receiving end of a breathtaking batting display from openers Stirling and captain William Porterfield.

Porterfield set the tone with three boundaries off Ryan Harris in the second over. Stirling greeted Doug Bollinger by smashing fours off his first two balls before hitting two more off Clint McKay in the following over. After four overs, Ireland were cruising at 42/0 and a shock victory now seemed closer to reality.

Porterfield hit the first six of the innings in the tenth over as he tonked McKay over square leg and into the crowd. The openers had made full use of the powerplay and the score at the ten-over mark read an astonishing 76/0. The game was Ireland’s to lose. However soon, inexperience proved to be their undoing. 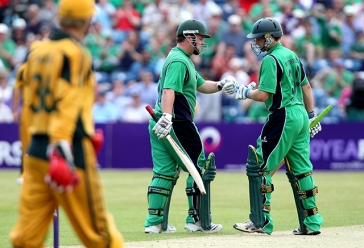 Harris provided the breakthrough by castling Stirling for 36 in the eleventh over. After an opening stand of 80, all Ireland needed were a couple of cool heads to see them through to a historic win. If only it was so simple against the world’s best ODI team.

A buoyed Harris struck in his next over as well as he trapped Wilson plumb in front. Just four balls later, Hauritz bowled Porterfield for 39 with his off-spin. Ireland had now lost three wickets for just six runs and Australia were well and truly clawing back into the contest.

Niall O’Brien and Cusack put the chase back on track with a fourth-wicket alliance of 51. At the end of 24 overs, the hosts required just 95 runs more with seven wickets in hand. However, they had reckoned without James Hopes, whose right-arm medium pace was perfect for the pitch.

After a tight first two overs, Hopes had Cusack (30) LBW in his third to reduce Ireland to 137/4. In the next over, Hauritz further unsettled the Irish fans by accounting for the key wicket of Niall O’Brien, caught behind by Paine.

Nerves were quickly tightening as the last recognised batting pair of Kevin O’Brien and White got together. Ireland’s wings had been clipped and the gulf between the teams’ experience was now showing. After having dealt with the faster bowlers with ease, the batsmen unravelled against Hopes.

Hopes had both White and O’Brien caught behind in successive overs to shatter the Irish dream. The score now read 150/7 with a full 19 overs yet remaining. It was too tall a task for the Irish tail as Hopes completed his five-wicket haul by bowling Trent Johnston and then having Peter Connell LBW in successive balls in his ninth over.

Having bowled unchanged since the 20th over, Hopes turned out to be Australia’s saviour with a career-best spell of 9-3-14-5. From 137/3, Ireland had crumbled to 156/9 after 35 overs. The last pair of John Mooney and Rankin kept things interesting with a stand of 36, but it was too little, too late.

The innings ended when Mooney, who scored a valiant 38, edged Shane Watson to Ponting at mid wicket. Ireland were bowled out for 192, falling 39 runs short with a full eight overs left unused. Australia were no doubt relieved, while Ireland were left to ponder at what might have been. Hopes was rightly named man of the match.

James Hopes gets mobbed by his teammates after he dismissed Peter Connell. Hopes took 5/14 to spearhead Australia to a hard-fought victory (source – AFP/ smh.com.au)

Australia had somehow squeezed out a victory after facing a very real prospect of going down to the Irish – a defeat which would have drawn parallels with their loss to Bangladesh at Cardiff in 2005. Hopes admitted the team were rusty after a lengthy break from 50-over cricket and that they had to dig deep to achieve the win.

“They got off to a blistering start and they were in a position to put us away, and we were fortunate to get out. Fortunately we brought it back in the middle overs and you could look at it that we got out of jail “, said Hopes after the match.

Porterfield was understandably disappointed at having let go of such a big chance. “We had them right on the back foot,” he said. “It was ours to lose and we let it slip. It’s pretty disappointing from the position we were in, especially after the first 10-12 overs. We took the game to them. We definitely put them under pressure.”

Later in the season, Ireland achieved their first home ODI win against a Test nation when they beat Bangladesh by seven wickets at Belfast. In 2013, they twice came agonisingly close to beating Pakistan at home before conceding a 1-0 defeat in the two-match series, tying the first and losing the second.

One wonders how much Ireland would have benefitted had they beaten Australia that day. Would they have secured regular fixtures against top opposition? Would they have come closer to Test status? Or would the ICC have simply turned a blind eye, as was the case after Ireland beat England at the 2011 World Cup?

As Thursday beckons, can Ireland go one step further and record a maiden victory over the Australians? It will certainly not be easy against the side which emphatically regained the World Cup earlier this year. But with the stout-hearted Irishmen, never say never.