The Gentleman’s Game has come a long way from the days of Bodyline. Today, due to cricketers travelling across the world and plying their trade in various T20 leagues, the contests are rarely as heated as they used to be. Since the game play has simmered down, the purists are now often taking issue with on-field sledging.

As per the Oxford Dictionary, sledging is defined as ‘making taunting or teasing remarks to an opposing player, especially a batsman, in order to disturb their concentration’, and I for one do not really see why cricketers can have a problem with it.

Sledging has been a part of the game since times immemorial and has provided some enthralling moments over the years. Who can forget Steve Waugh sledging Curtly Ambrose at Trinidad in 1995 that made Ambrose bowl one of the fiercest spells in history!

Cricket unlike football or rugby is a non-contact sport, so a little bit of sledging or trash talk should not be considered taboo. It often enlivens many a drab day’s play.

When one talks of sledging among the current crop of players, David Warner is the first name that comes to mind. Martin Crowe, the legendary Kiwi, recently condemned Warner for his “thuggish behavior”.The likes of Warner and Virat Kohli are considered the bad boys of the game due to a few altercations with fellow cricketers. 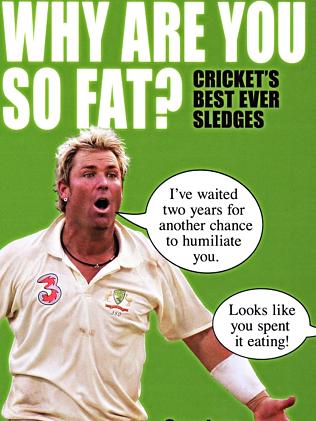 The cover of a book on sledging by Gershon Portnoi (source – dailytelegraph.com.au)

However, I am of the opinion that there are certain players who wear their hearts on their sleeves and if authorities curb their aggressive style, then the game will be shorn of its vibrancy.

Cricket has been blessed with characters like Merv Hughes, Malcolm Marshall and Dennis Lillee to name a few and if they had gone on to go about their task without the odd word, then cricket would be no different than chess.

After the last Ashes series in 2013-14, James Anderson described sledging as a ‘skill’, one that he considers a key aspect of his game and I wholeheartedly agree with him. To be a good cricketer one requires both physical and mental discipline and being involved in a healthy verbal duel can enhance ones’ mental toughness.

To quote an example, even the great Rahul Dravid, who never himself indulged in such exchanges on the field, has gone on record to say that sledging from opponents not only strengthened his resolve but also brought out the best in him. Dravid thrived on challenges and gave it back by talking with his bat, thus making for an absorbing contest.

I believe that sledging is an art which when done well can be as effective as a yorker at 150 kmph. Just a bit of advice for the officials sitting in their air-conditioned offices in Dubai – please focus on important things like the size of the bats and leave the banter to the cricketers on the field.

After all, it is a good ball or a poor shot, and not the words, that should cost a batsman his wicket. A few colourful exchanges just shows how passionate these cricketers are and only adds flavour to the game that is becomes quite tedious to watch when the going gets dull.

Media professional married to sports! View all posts by stumpedreferee