Over the years, the Ashes battles have introduced to us men who were destined to make a great impact on the game. From Frederick Spofforth to Glenn McGrath, legions of legends have displayed their artistry on the canvas that is an Ashes series.

There can hardly be a bigger occasion for either an Australian or English cricketer than to inspire his side to Ashes glory or to salvage his nation’s pride in the grimmest of situations.

However, at times, even the greats of the game have failed at the biggest stage of them all. The pressure of an Ashes series can be immense, especially when the urn is at stake.

It is during such times that the spotlight turns on to lesser-known, understated men who have often seized the moment and established their place in the annals of the game’s oldest rivalry.

In this first of a two-part series, we look back at four such unsung heroes who have become imbibed in the long history of this 135-year-old epic with their extremely valuable, and in most cases, unexpected contributions. 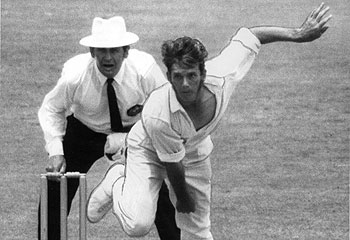 Bob Massie had a most sensational Test debut in 1972, as he took 16 wickets at Lord’s to inspire Australia to victory (source – foxsports.com.au)

It is indeed unfortunate that the man who took a record 16 wickets on Test debut, that too at Lord’s, played only five more Tests for Australia. Going by the full name of Robert Arnold Lockyear Massie, this fast-medium bowler from Perth was included in the team for the second Test at Lord’s in 1972 after England had taken an early lead at Old Trafford.

Massie went on to stun the home batsmen with his darting outswingers and generous pace. He swung the ball at will en route to 8/84 and 8/53 in the two innings to help Australia to a comfortable eight-wicket win. The five-Test series was eventually drawn 2-2, with England retaining the Ashes.

Massie’s record haul of 16/137 is still the fourth-best match-figures in the history of Tests. His feat on debut was surpassed by a whisker by India’s Narendra Hirwani, who had figures of 16/136 in his first Test in 1987-88.

Massie played in the next three Tests of the 1972 Ashes, but took only seven wickets. He soon fell out of favour – his career did not even last a year, as he was destined to play his last Test at the SCG against Pakistan less than seven months after his debut, finishing with 31 wickets in six Tests.

His first-class career too ended in 1975. However, in spite of a nondescript Test career, Massie will forever be remembered for one of the strangest and most memorable Test debuts of all time.

David Steele was called by the Sun’s Clive Taylor as the ‘bank clerk who went to war’. England had just been rolled over by a margin of 4-1 in Australia six months earlier, with their batsmen repeatedly getting mauled by ‘Lillian Thomson’ (the fearsome pace bowling duo of Dennis Lillee and Jeff Thomson).

The 1975 Ashes began in expected fashion, with England suffering an innings defeat at Edgbaston – the dreaded twosome taking twelve wickets between them. Captain Tony Greig wanted someone who could tackle Australia’s pace menace, and he hoped to find his answer in David Steele, a grey-haired and bespectacled 33 year-old from Northamptonshire.

Steele, who was known for his solid technique and yet had a first-class average of only under 32, duly made his debut at Lord’s, coming in at a wobbly 10/1 in the first innings. It later became 49/4, but he took Lillee and Thomson head-on before getting out for 50.

He also chipped in with 45 in the second innings and seemed to have broken the psychological chains in which Australia had bound the home side – in the second dig, the other batsmen made substantial scores to force a draw.

In the third Test at Headingley, Steele top-scored in each innings, with 73 and 92, and suddenly he was becoming the unlikely hero of the summer. Australia’s final series victory margin remained 1-0, with Steele scoring 39 and 66 in the fourth and final Test at the Oval.

David Steele came out of  nowhere to become the toast of England in 1975. Here he is in action on his Test debut at Lord’s (source – thesundaytimes.co.uk)

Thus he scored 365 runs – England’s second-best tally after John Edrich – at 60.8 in the series, and England seemed to have found an answer to ‘Lillian Thomson’ from the unlikeliest of men. He was named the BBC Sportsperson of the Year for his courageous performances.

Steele went to play the entire 1976 series against the West Indies, during which he struck a career-best 106 at Trent Bridge against the likes of Andy Roberts and Wayne Daniel. Strangely, he was never picked after that, and his Test career lasted eight matches in all. However, that duration was enough to seal his place in Ashes folklore.

Richard Ellison, a medium pace bowler from Kent, did not inspire much public confidence when he was recalled for the fifth Test of the 1985 Ashes at Edgbaston, given that he had taken only ten wickets in his previous five Tests at an average of nearly 49. England were looking to regain the urn; the six-Test series was locked at 1-1 after four matches.

The remaining two Tests were enough for Ellison to become an Ashes hero – at Edgbaston alone he doubled his career wickets tally by taking 6/77 and 4/27, proving his doubters wrong. England had a commanding first innings lead of 260 and Ellison’s second-innings burst of 4 for 1 in 15 balls condemned Australia to an innings defeat.

He was not done yet, as in the final Test at the Oval he took 2/35 and 5/46. His second-innings spell helped England bundle Australia out for just 129 as England secured the Ashes with another series win.

Ellison took 17 wickets to finish as the fifth-highest wicket-taker in the series, but it is to be noted that the four bowlers ahead of him played in all six games compared to Ellison’s two.

He also had the satisfaction of dismissing the visiting captain Allan Border thrice in four innings. However, he was not as effective overseas and soon faded into oblivion. He played only four more Tests, the last of which was in 1986, before retiring from the first-class scene in 1993 at the age of 33.

This Victoria-born fast bowler could bowl at real speed, as the English batsmen found out in 1978-79. He was among the many new faces in the Australian side for that summer, since the core of the team was missing due to the Kerry Packer exodus.

Amid the crisis and a nightmarish series – Australia were routed 5-1 – Hogg was the only one who provided the beleaguered home side with something to cheer about. He started by claiming 6/74 in his debut innings, and then took ten wickets each at Perth and Melbourne – four successive five-wicket hauls – to race to 27 wickets in his first three Tests. His 10/66 at the MCG guided Australia to their only victory. 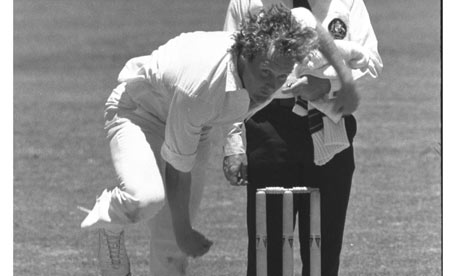 Rodney Hogg had the English batsmen at his mercy in 1978-79, his debut series, but his 41 wickets could not stop England from winning 5-1 (source – guardian.co.uk)

He took 14 more scalps in the next three Tests to finish with a stunning 41 wickets – 16 more than anyone else – at an average of 12.85, collecting five five-wicket innings hauls and two ten-wicket match hauls.

Only Jim Laker (46 in 1956) and Terry Alderman (42 in 1981) have taken more wickets in an Ashes series. He naturally kept his place when the regulars returned, but this first series was to be his peak moment.

His debut series tally was to be a third of his career total – he finished with 123 wickets in 38 Tests at a respectable 28.47. He reserved his best for Ashes contests – his record against England being 56 wickets at 17 in 11 Tests.