The West Indies were just beginning their dominance as the world’s champion team when they came to England for the 1980 Wisden Trophy. The result in this first of five Tests at Trent Bridge ultimately proved to be decisive, what with the series being played in the wettest summer in 26 years.

England failed to maintain substantial partnerships after Ian Botham elected to bat. They ended the first day at 243/7, mainly due to a 90 run stand for the 5th wicket between Bob Woolmer and Botham, after England were reduced to 114/4. Botham was fifth out after making a breezy 57 while Woolmer scored a gritty 46. The innings terminated at 263 the following day, with Andy Roberts returning figures of 5/72. In reply, the West Indies lost Desmond Haynes early but Gordon Greenidge (53) and Vivian Richards (64) put on 88 for the second wicket. England kept on taking wickets at regular intervals to ensure that the visitors ended the second day at 270/7.

Wicketkeeper Deryck Murray was last out as his side lost their last 3 wickets for 2 runs to be bowled out for 308 early on Day 3. It was Bob Willis who was the pick of the bowlers, taking 4 crucial wickets for 82. England, trailing by 45, began their second innings well before Graham Gooch was run out and Chris Tavare caught off Joel Garner to make it 68/2. Geoffery Boycott and Bob Woolmer then dropped anchor, and made sure there were no further hiccups until stumps, the score being 145/2.

Their watchful partnership yielded 106 before Woolmer was caught behind. His dismissal triggered what was perhaps a game-changing collapse, as England went from 174/2 to 183/6 (Roberts taking three of the four), losing both David Gower and Botham cheaply. Boycott was sixth out for a characteristic 75 from 263 balls – he batted for close to 6 hours. England eventually managed to reach 252, helped generously by a tally of 52 extras conceded by the visitors. Garner (4/30) and Roberts (3/57) were again the chief wicket-takers, giving them 7 and 8 wickets in the match respectively. 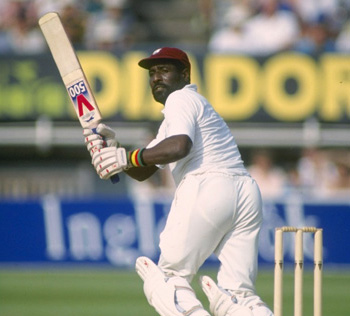 The target for the West Indies was 208. Even though Greenidge was dismissed early, Richards cracked a quick 48 to give his team the momentum. The Windies were placed at 109/2 at the end of Day 4, and the equation for the final day was a comfortable 99 runs to win with 8 wickets still standing. But England were not going down without a fight, and the suddenly had their opponents on a sticky wicket at 129/5, with the excellent Willis removing Alvin Kallicharan and Clive Lloyd within the space of four runs. Yet the opener Haynes went about his batting quietly, steadily reducing the target even as partners came and went. Willis went on to dismiss Murray and Malcolm Marshall too, and the West Indians were 180/7, still requiring 28 to win.

Haynes was still there though, and found a willing ally in Roberts. The duo put on 25 until Haynes was dismissed for a valuable 62 courtesy a brilliant run out by Peter Willey, and the score was 205/8 – Haynes left the field in tears thinking that his dismissal would bring his side defeat even though the required runs were only 3. Instead, the West Indies clung on for a 2-wicket win which would turn out to be the only result in the 5-Test series. The tireless Willis took 5/65 to give himself 9/147 in the Test.

It was Roberts who hit the winning runs, lifting Botham over long-on for four to help his side reach 209/8. Roberts made a crucial unbeaten 22 to go with his 8 wickets, and was named Man of the Match. In terms of wickets, this is the closest Test between the two teams alongwith England’s victory by the same margin in the famous Lord’s Test of 2000.

One wonders whether the result would have been different had Gower not put down the safest of catches after Andy Roberts heaved the ball towards cover. At that point 13 runs were still needed, and who knows what might have been the result had the catch been taken. The next four Tests were all drawn thanks to the rain, but West Indies were definitely the better team. The next time West Indies traveled to England in 1984, they were much stronger and the weather much more relenting. The result was a 5-0 ‘blackwash’ for England.