The 1936 tour of England was India’s second Test tour of the mother country – having first played their inaugural series there in 1932. England won the 3-Test series comfortably, naturally being the stronger team. However it was not just England’s strength that condemned India to the defeat. India’s captain for the series, the Maharajkumar of Vizianagram (1905-1965) played a major part in destroying the confidence of his own team.

Going by the name of Vijayananda Gajapathy Raju, the Maharajkumar gained popularity in cricketing circles because of his enormous wealth, and thus the clout to influence major decisions. When the MCC cancelled the tour of India in 1930-31 owing to political problems, he organised a team of his own and toured India and Ceylon. He succeeded in drafting Jack Hobbs and Herbert Sutcliffe for the team, a considerable feat as Hobbs had previously refused offers for five such tours. His wealth and contacts brought him great influence in Indian cricket, even though his cricketing abilities were not great. In the early thirties, he offered to pay the board fifty thousand rupees, forty thousand of it for inaugural Indian tour of England that happened in 1932. He was appointed as the ‘deputy vice captain’ for the tour but withdrew on reasons of poor health.

‘Vizzy’, as he was popularly known by the British media, was finally named captain of the national team for the 1936 tour, obviously securing the post by lobbying and manipulation. The 1936 squad had some of the greatest talents ever to have played for India – Lala Amarnath, Vijay Merchant, CK Nayudu, Mushtaq Ali and Ladha Amar Singh. However Vizzy’s appointment as captain divided the team into those who supported him and those who were critical of him. Soon this colourful character of a captain plunged the tour into controversy.

Amarnath, then 24 years old, had become India’s first Test centurion in 1933-34, and was the best player in the squad due to his all-round abilities. Vizzy began to conspire against him, first telling him to stay away from Nayudu (who was India’s first ever Test skipper). In return, the captain supposedly took the youngster for rides in his car. However, Vizzy continued to play wicked games with Amarnath – at one time, banishing him to the outfield in a match against Leicestershire, because the latter, while bowling, had requested him for some fielding changes.

The injustice against Amarnath continued, and the matter reached boiling point in the tour game against the Minor Counties. Amarnath was told that he would be batting at No.4 and had padded up, but Amar Singh was sent in at the fall of the second wicket. He sat waiting with his pads on and was allowed to go in only when the fifth wicket went down, 10 minutes from the close of play. And when he came back to the pavilion, he could not control himself any more. He threw down his pads and blurted out the choicest of Punjabi expletives. 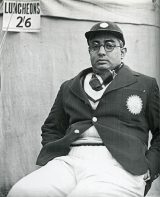 Sir Vizzy – the whimsical Indian captain who conspired against his own team (source – rediff.com)

Enraged by this, Vizzy took the team manager Major Brittain-Jones into confidence, and succeeded in sending back Amarnath from the tour on charges of misbehaving with the captain. India’s best hope had been sent back by the whimsical captain even before the first Test started. And when the series did start, India lost easily – losing the first and third Tests at Lord’s and the Oval by 9 wickets each, managing a draw at Old Trafford in between. Vizzy’s antics did not end with Amarnath’s ouster.

It is alleged that in the first Test, he offered Mushtaq a gold watch to run out Merchant. As a riposte perhaps, the two batsmen put on a record 203 for the opening wicket to help India draw the second Test. Even as India were losing the series, Vizzy was knighted for his services as a patron of the game. At one stage, the senior players demanded more consultation and an end to favouritism. Nayudu or Syed Wazir Ali, they said, should be made vice-captain. After this series, neither played Test cricket again. 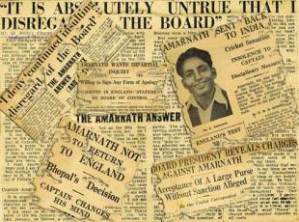 Nor did ‘Sir’ Vizzy – these three matches constituted his entire Test career. The tour was a disaster for the team, and for himself too – averaging 8.25 in the Test series, and a slightly higher 16.21 against the Counties – and that too because many of the bowlers were under instructions to bowl freebies and full-tosses to him, in return for gifts and gold watches! Even the English media attacked his desperately poor captaincy and performances. One observer remarked that Vizzy’s total number of runs during the tour was nowhere close to the number of Rolls Royce’s in his garage!

In the post-tour inquiry, Amarnath was not found guilty of the charges against him, while of Vizzy it was said that ‘he did not understand field placings or bowling changes and never maintained any regular batting order.’ Vizzy returned in the 1950’s as a cricket administrator (BCCI president from 1954-57) and an extremely dull commentator. Ironically, he played a role in bringing back Amarnath as captain in 1952. But besides being the only Indian cricketer to have been knighted (though he renounced the title in 1947),he will go down in history, without argument, as the top-most name in any list of  ‘Test captains who should never have been.’