As far as drawn Test matches go, this final Test of the four-match series between England and India, played from August 30 to September 4, 1979, sits right up there in terms of excitement.

England were leading 1-0 after three Tests thanks to a thumping innings win in the first Test. India, needing nothing less than a victory to level the series, fell agonisingly short of achieving a stunning win.

English captain Mike Brearley won the toss and decided to bat, but his side was soon in trouble at 51/3. This included the loss of Geoffrey Boycott and David Gower in successive deliveries, both leg-before to Kapil Dev.

Peter Willey (52), playing after three years, joined Graham Gooch and the duo put on 97 for the fourth wicket before Gooch added a further 55 with Ian Botham for the fifth as the hosts ended Day 1 at 245/5. Gooch was out in the very first over on day two after making 79. England eventually ended at 305, with Kapil and Srinivas Venkataraghavan picking three wickets apiece.

India started disastrously, losing Chetan Chauhan and Dilip Vengsarkar to become 9/2. Both the batsmen were caught splendidly by Botham in the slips off Bob Willis. Sunil Gavaskar followed soon, out for 13 to make the score 47/3.

Gundappa Viswanath anchored the innings but could not steer India to safety. He was out for 62 towards the end of the day, which ended early due to bad light with India in an unsteady position at 137/5.

Apart from Yajurvindra Singh, who remained unbeaten on 43, the rest of the Indians offered no resistance as they folded for 202, thus trailing by 103. The pacemen took all the wickets, with Botham being the pick with 4/65 to go with his two catches. Willis and Mike Hendrick took three wickets each.

England ended the third day at 177/3 in their second innings, leading comfortably by 280 and Boycott being unbeaten on 83. The hosts piled on the runs on day four, with the seventh-wicket stand of 76 between Boycott and debutant wicketkeeper David Bairstow frustrating the Indians the most.

Boycott was out for a  typically obdurate seven-hour 125 while Bairstow made 59. The latter’s dismissal was the last ball of the innings as England declared at 334/8. India, set a mighty 438 in 500 minutes to level the series, trotted along to 76/0 at stumps with a day to go.

The Indian openers Chauhan and Gavaskar did not seem to be looking to hunt down the total as they went about for less than 50 runs an hour for the first three hours. However, their partnership had grown into a record 213 when Chauhan was finally dismissed for 80, having batted for 314 minutes.

Vengsarkar joined his Mumbai teammate Gavaskar, and the scoring pace stepped up a bit. Gavaskar was the dominating partner, going for most of the shots. With England desperate for wickets and trying to slow down the proceedings, India had no option but to attack if they wanted to win the Test.

At tea on the final day, the score was 304/1. India began the final session well and with the last 20 overs to go, needed only 110 runs more with nine wickets still intact. Botham dropped Vengsarkar (52) at 365/1, but came back strongly to catch him off Phil Edmonds a run later.

Captain Venkataraghavan then promoted the hard-hitting Kapil ahead of the experienced Viswanath, but he immediately got out for a duck. India were now 367/3. Gavaskar, still there and still batting beautifully, added 22 with Yashpal Sharma before Botham returned to the attack with eight overs left and India requiring 49 to win. 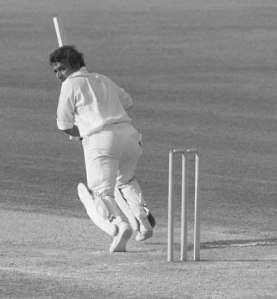 Little Master Gavaskar flicks one en route to his epic knock of 221 at the Oval (source – espncricinfo.com)

Brearley, having slowed down the over rate, now called for a drinks break. Thus the concentration was disturbed and after eight hours and nine minutes, Gavaskar perished for a glorious 221, holing out to Gower.

The great batsman faced 443 balls and collected 21 fours in a chanceless innings, one of the finest ever to be played on English soil. It also broke the record for the highest score by an Indian against England, beating Nawab of Pataudi Junior’s 203 made at Delhi in 1964-65.

With their anchor-man gone, India lost momentum. Brearley’s shrewd tactics paid off as Botham collected two more wickets while Willey accounted for Viswanath. It was all down to 15 runs needed off the last over with two wickets in hand, but it was too tall a mountain to climb.

India ended at 429/8 (then the fourth highest fourth-innings total), a mere nine runs short of what would have been the highest ever successful run chase to this day. The match was drawn and England – just – took the series 1-0. Botham finished with 3/97, including a most crucial haul of 3/17 in his last four overs.

Gavaskar was rightly named man of the match for his memorable and technically flawless double-century while Botham was named man of the series. Gavaskar scored 542 runs in the series at an average of 77.42, but his efforts were not enough to prevent India from a series defeat.