This Test was the only one in the five-match series to end with a result. The West Indies had lost quite a bit of their aura of their golden period, but were nevertheless a strong force to reckon with, especially at home. India meanwhile were again looking to shed their ‘poor travellers’ tag, having being resoundingly beaten in South Africa a few months back.

At the behest of the captains, a grassy wicket was prepared for this third Test – played from March 27-31, 1997 at Bridgetown’s Kensington Oval – following featherbeds in the first two Tests. Unsurprisingly, both sides were packed with pace bowlers. India, led by a 23-year-old Sachin Tendulkar, elected to field after winning the toss.

Shivnarine Chanderpaul played a masterclass – a kind of innings he would repeat many times in his career. He remained unbeaten on 137 off 284 balls with 12 fours, ensuring that the hosts posted 298 after being a dodgy 131/5, and shared in stands of 56 for the sixth wicket with Courtney Browne and more importantly, 65 with Curtly Ambrose for the eighth wicket.

Chanderpaul reached his century towards the end of the first day, reaching 102* with the West Indies 240/7 at stumps. Venkatesh Prasad was the pick of the Indian bowlers, finishing with 5/82 and ending the home side’s innings by trapping Mervyn Dillon leg-before for nought.

Shivnarine Chanderpaul made an outstanding 137* in the first innings

India then marched on to a position of relative strength, reaching 249/3 by the end of day two. After losing openers VVS Laxman and Navjot Sidhu early, the visitors rode on a 170-run partnership for the third wicket between Rahul Dravid and Sachin Tendulkar.

Tendulkar was out for 92, caught at gully off what was later found to be a no-ball by Ian Bishop, while Dravid was also dismissed by Bishop, early on day three for 78. Following Dravid’s dismissal, India squandered their advantage and lost 6/46 to be bowled out for 319, the lead being only 21 runs. Franklyn Rose, who debuted early in this series, took 4/77.

However, the slender lead was looking sufficient when India had the hosts on the mat at 95/8 in their second innings – with all three pacemen – Prasad, Abey Kuruvilla and Dodda Ganesh – making life difficult for the batsmen. Captain Brian Lara cracked a counter-attacking 45, but it was too good to last, as he fell to Prasad to make the score 86/5, which became 95/8 and later 107/9.

Last man Dillon joined Ambrose (18*) in the middle, and the duo frustrated India with a stand of 33 before Dillon was bowled by Kuruvilla (who took 5/68, including the last four wickets) for a 17-ball 21. This stand, which would turn out to be the most crucial one in the Test, enabled the Windies to reach 140, and India required 120 to win their first Test in the Caribbean since 1975-76.

India, overnight 2/0, soon became 3/1 early on day four when Sidhu was caught in the slips off Rose. Rose used the pitch to its maximum, extracting pace and bounce to claim Laxman and Dravid as well to make it 32/3. 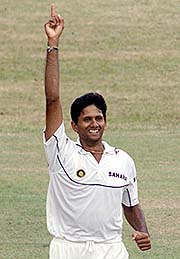 Venkatesh Prasad’s match haul of 8/121 was undone by his team’s batsmen (source – tribuneindia.com)

Bishop and Ambrose too joined the party, with the former getting Tendulkar out (32/4) and the latter nailing Sourav Ganguly and Mohammed Azharuddin to reduce India to an abysmal 51/6; the visitors still needing 69 to win with their top six all back in the hut.

The West Indians were charged up and there was no looking back for them. Buoyed by the delirious Barbadian crowd, they proceeded to take the remaining four wickets comfortably – shooting India out for a paltry 81 in 35.5 overs. No one except Laxman (19) reached double figures.

Bishop (4/22), Rose (3/19) and Ambrose (3/36) all combined to destroy India’s batting and condemn them to an embarrassing 38-run loss. Lara, who captained in place of the injured regular captain Courtney Walsh for this Test, became the sixth West Indian to win his first Test as captain.

In this battle of tall pacemen, there were ultimately batting feats that made the difference – Chanderpaul’s one-man show in the first innings (for which he was named man of the match) and the priceless last-wicket stand worth 33 runs in the second innings between Ambrose and Dillon.

The West Indies eventually won the series 1-0, while India let go a golden chance of winning a series abroad, this time snatching defeat from the jaws of victory.