Bangladesh’s elevation to Test status in 2000, coupled with the increase in the number of participating teams by two, led to room for four Associates at the 2003 World Cup in Africa. The 2007 edition in the Caribbean was even more inclusive, as an unprecedented six Associates featured in it. Continuing our series on Associates at the World Cup, we look back at their performances at these two tournaments.

Besides the ten Test-playing teams, Kenya also qualified automatically for the 2003 World Cup by virtue of holding full ODI status. The 2001 ICC Trophy in Canada saw a two-division format consisting of 24 teams, and was won by the Netherlands, who prevailed by two wickets in a thrilling final against a spirited Namibia. Hosts Canada clinched the crucial third place with a five-wicket victory over Scotland.

Placed in Group A, the Netherlands began their campaign with promise, as they bowled India out for 204 at Paarl. Though the Oranje lost by 68 runs, Tim de Leede was named Man of the Match for his haul of 4/35, which included the scalp of Sachin Tendulkar. De Leede starred with the bat in the Netherlands’ second match with 58*, but his team could only manage 142/9 en route to a six-wicket defeat to England.

Two tough fixtures against Australia and Pakistan followed, in which the Netherlands went down by 75 runs (on the D/L method) and 97 runs respectively. It was a similar story at Bulawayo, where they lost to Zimbabwe by 99 runs after being set a steep 302 to win. But they avoided the wooden spoon in the group with their maiden ODI win, by 64 runs against Namibia in their last game at Bloemfontein.

A second-wicket stand of 228 between Feiko Kloppenburg (121) and Klaas-Jan van Noortwijk (134*) propelled the Dutch to 314/4, after which Kloppenburg took 4/42 with his medium pace. Off-spinner Adeel Raja also returned figures of 4/42, as Namibia were bowled out for 250 in the 47th over. This meant that Namibia finished without a win, and it would be another 16 years before they played their next ODI.

The Namibians were at the receiving end of Craig Wishart’s 172* in their opening game at Harare, where Zimbabwe won by 86 runs on the D/L method after posting 340/2. Namibia’s batting let them down, as they were bowled out for 84 in a 171-run defeat to Pakistan, 130 in a 181-run defeat to India, and 45 in a record 256-run defeat to Australia (Glenn McGrath taking 7/15, the best figures in World Cup history).

However, in the midst of these drubbings was a resolute performance against England at Port Elizabeth. Pace bowler Rudi van Vuuren, who would go on to become the first man to play in both cricket and rugby World Cups later in the year, took 5/43, while opener Jan-Berrie Burger kicked off Namibia’s chase of 273 with a blazing 86-ball 85. Namibia lost by 55 runs, but they had reason enough to be proud.

In Group B, Canada marked their ODI return (having last played the format in 1979) with a 60-run win over Bangladesh at Durban. The star was paceman Austin Codrington, who ensured a successful defence of a modest 180 with figures of 5/27. They lost their next game by six wickets to Kenya, before enduring an embarrassing low against Sri Lanka at Paarl, where their innings lasted for just 18.4 overs.

Canada were routed for 36 – a new record for the lowest ODI total – on the way to a nine-wicket thumping. Canada also held the record for the previous lowest World Cup total, which was 45 against England in 1979. Four days later, a Canadian produced arguably the most incredible innings of the tournament, as opener John Davison set Centurion alight with a stunning 111 in 76 balls against the West Indies.

Davison hit eight fours and six sixes, and reached his hundred off just 67 balls – then the fastest in World Cup history. Frustratingly, his dismissal triggered a collapse from 156/2 to 202 all out, and the West Indies coasted to a seven-wicket win. Canada lost to South Africa by 118 runs in their next fixture, before signing out with a five-wicket defeat to New Zealand, in which Davison hit 75 from 62 balls.

When Kenya were rolled over for 140 en route to a ten-wicket thrashing at the hands of South Africa in their first match at Potchefstroom, no one could have possibly imagined the turn of events in the ensuing weeks. The Kenyans began their redemption by defeating Canada, and then, in a slice of fortune, pocketed two points after New Zealand forfeited their fixture at Nairobi on security grounds.

Kenya’s fourth match was against Sri Lanka, also at Nairobi, and this time they were the masters of their own destiny. Wicketkeeper-opener Kennedy Otieno top-scored with 60 to carry the Steve Tikolo-led outfit to 210/9, after which his younger brother, leg-spinner Collins Obuya, stole the show by taking 5/24. Obuya wrecked the Sri Lankan middle order with timely strikes, handing Kenya a historic triumph.

Sri Lanka were bowled out for 157 in 45 overs, giving Kenya a great chance to progress. Deprived of watching their team play against New Zealand, the local crowd had witnessed the tournament’s biggest upset. Kenya sealed a Super Six spot with a 32-run win against Bangladesh at Johannesburg, where Maurice Odumbe first scored 52* to steer the total to 217/7, and later snared 4/38 with his off-spin.

Kenya lost their last group match against the West Indies by 142 runs and their first Super Six match against India by six wickets (Otieno scoring 79 out of 225/6), but they needed just one win to seal a fairytale semifinal entry, which they achieved against Zimbabwe at Bloemfontein. Pacer Martin Suji (3/19) and Obuya (3/32) combined to skittle Zimbabwe for 133, laying the way for Kenya’s seven-wicket win.

Though Kenya lost to Australia by five wickets in their last Super Six game at Durban, the day belonged to the 39-year-old left-arm spinner Aasif Karim, who returned mind-boggling figures of 8.2-6-7-3 against one of the strongest batting line-ups. Kenya’s memorable journey ended with a 91-run loss to India in the semifinal at Durban, with Tikolo scoring a gritty 56, his second fifty in a row, in a chase of 271.

The World Cup came to the Caribbean for the first time, and as many as six Associate nations got the opportunity to showcase their wares in a new format that featured 16 teams in four groups of four each. As was the case for the 2003 edition, Kenya were not required to go through qualification. The 2005 ICC Trophy was played in Ireland and featured 12 teams, with five World Cup spots up for grabs. 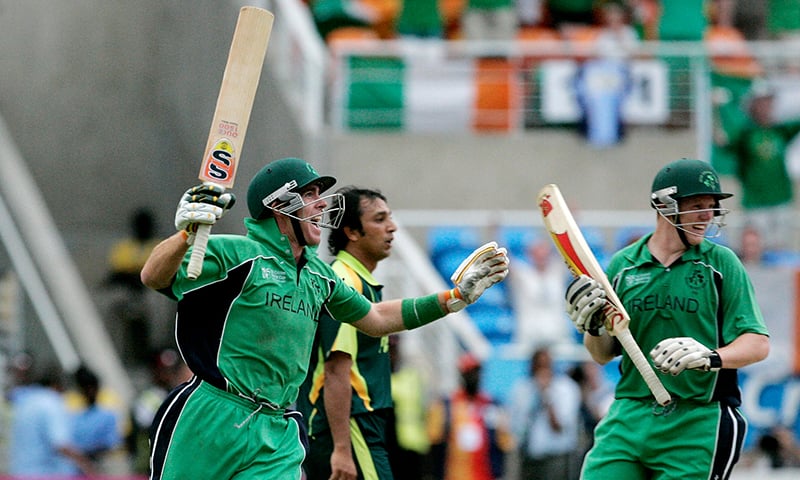 It was Scotland who won the title, beating Ireland (who qualified for their first World Cup) by 47 runs. The losing semifinalists were Bermuda (like Ireland, first-time qualifiers) and Canada, while the Netherlands finished fifth at the expense of the United Arab Emirates. Scotland and the Netherlands were drawn in Group A, Bermuda in Group B, Kenya and Canada in Group C, and Ireland in Group D.

Scotland lost their three games heavily – by 203 runs to Australia, by seven wickets to South Africa and by eight wickets to the Netherlands. The Netherlands too suffered colossal defeats against South Africa (by 221 runs in a rain-reduced 40-over encounter, with Herschelle Gibbs famously hitting six sixes in an over off Daan van Bunge) and Australia (by 229 runs) before bowing out by beating Scotland.

Bermuda lost by 243 runs to Sri Lanka, by 257 runs – a new ODI record – against India, who racked up a World Cup record total of 413/5, and by seven wickets to Bangladesh.  But they provided one of the most iconic World Cup moments when Dwayne Leverock, weighing 280 pounds, leapt to take a superb one-handed catch at slip to dismiss India’s Robin Uthappa off the bowling of 17-year-old Malachi Jones.

Served by Morris Ouma (59) and captain Tikolo (72*) in a chase of 200, Kenya began with a facile seven-wicket win over Canada. But hopes of a repeat of 2003 were dashed by back-to-back defeats to New Zealand (by 148 runs) and England (by seven wickets, with Tikolo’s 76 going in vain). Not surprisingly, Canada also lost to the heavyweights – by 51 runs against England and by 114 runs against New Zealand.

Not much was known about the plucky Irishmen, led by Trent Johnston, before the tournament started. But the debutants signalled their intentions in their opening match at Kingston, as they held Zimbabwe to a tie. Southpaw opener Jeremy Bray’s fine 115* improved Ireland’s total from 89/5 to 221/9, before a late comeback by the Irish bowlers sent Zimbabwe crashing from 203/5 to 221 all out in the last six overs.

Two days later – on St. Patrick’s Day – at the same venue, Ireland faced Pakistan, who needed a win to stay alive. Johnston had no hesitation in electing to field on a green pitch, and seamers David Langford-Smith and Boyd Rankin (3/32) duly responded by reducing the score to 15/2. Andre Botha, who finished with remarkable figures of 8-4-5-2, and Johnston struck as well, leaving Pakistan at 66/5.

Pakistan failed to recover and were bundled out for 132 in the 46th over. Facing a rain-revised target of 128 from 47 overs, Ireland were 15/2 when Niall O’Brien came in. The left-hander played a gem, scoring 72 in 107 balls to put Ireland on the cusp of history. After some tense moments, Johnston sent the Irish fans into delirium by hitting the six that gave Ireland a three-wicket win and a place in the Super Eight.

Ireland lost their last group game against the West Indies by eight wickets, as also five of six Super Eight matches – by 48 runs to England, by seven wickets to South Africa, by 129 runs to New Zealand, by nine wickets to Australia and by eight wickets to Sri Lanka. But they did get the better of Bangladesh, who mustered only 169 in reply to Ireland’s 243/7 (William Porterfield hitting a solid 85) at Bridgetown.