The 1994 edition of the ICC Trophy was hosted by Kenya, and was the first to feature 50-over games (as against 60-over games until 1990). Since breaking away from the East African team and becoming an Associate member of the ICC in 1981, Kenya had played the ICC Trophy thrice, with their best effort being a semifinal finish in 1990. Playing at home, Kenya had a great chance to seal a World Cup berth.

Kenya beat Bermuda in the semifinal to qualify for their maiden World Cup, and enjoyed an unbeaten run till the final, where they faced the United Arab Emirates, who were also yet to be beaten and were coming off a semifinal win against the Netherlands. Chasing a target of 282, the UAE triumphed by two wickets in an exciting finish. In the third-place playoff, the Netherlands prevailed over Bermuda.

Thus, the 1996 World Cup, co-hosted by India, Pakistan and Sri Lanka, witnessed three first-time participants – Kenya in Group A, and the UAE and the Netherlands in Group B. While the UAE had earlier played two ODIs at the Austral-Asia Cup in Sharjah in 1993-94, this was the first ODI tournament for Kenya and the Netherlands. In their opening game, the UAE ran into an in-form Gary Kirsten.

Kirsten struck a record-breaking 188* – which would remain as the highest individual score at the World Cup until the 2015 edition – in South Africa’s 169-run win at Rawalpindi, but the match is also remembered for the bravado of the UAE’s captain Sultan Zarawani, who audaciously came out to bat in a floppy hat instead of a helmet against the fury of Allan Donald, and was duly hit on the head first ball. 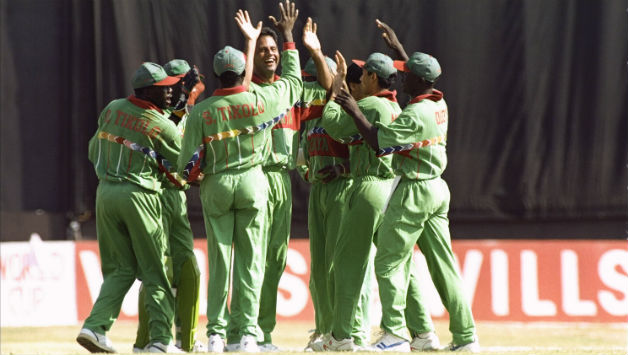 In the final round, the UAE and the Netherlands faced off at Lahore to avoid the wooden spoon, in what was the first ODI to be played between two Associate nations. Considering their spirited show against England at Peshawar, where Klaas-Jan van Noortwijk (64) and Bas Zuiderent (54) put on 114 for the fifth wicket in a chase of 280, the Dutch would have had backed themselves to put it across the UAE.

However, off-spinner Shaukat Dukanwala and opener Saleem Raza, who was playing in the city of his birth (in fact, six of the UAE’s eleven were Lahore-born), ensured a maiden ODI win for the UAE. Dukanwala captured 5/29 – the first five-wicket haul by an Associate bowler in ODIs – to restrict the Netherlands to 216/9, after which Raza belted a 68-ball 84 to lay the base for the UAE’s seven-wicket win.

Kenya lost to India by seven wickets in their first match at Cuttack, but they had the satisfaction of batting out their overs in making 199/6, with Steve Tikolo scoring 65. At Vizag against Australia, they ended at a respectable 207/7 in a 97-run defeat, with Kennedy Otieno (85) and captain Maurice Odumbe (50) among the runs this time. In their third game, they managed only 134 in a five-wicket loss to Zimbabwe.

Kenya’s fourth fixture was against the West Indies at Pune on Leap Year Day. A fourth defeat loomed large for the African outfit when they were bowled out for 166 after being put in to bat, but their bowling unit rose to the occasion and delivered a stunning performance. The West Indies lost four wickets for just 35 runs, with those of captain Richie Richardson and Brian Lara falling to seamer Rajab Ali (3/17).

The off-spin of Odumbe (3/15) then damaged the middle order, and with every wicket, his team’s euphoria heightened. A memorable upset was confirmed when Rajab castled Cameron Cuffy in the 36th over, condemning the Windies to just 93. Kenya’s campaign ended at Kandy against a rampant Sri Lanka, who amassed a new ODI record total of 398/5. Kenya replied with 254/7, with Tikolo hitting a spunky 96.

Bangladesh secured a World Cup spot for the first time by beating Scotland by 72 runs in the semifinal of the 1997 ICC Trophy, hosted by Malaysia. Kenya pipped Ireland by seven runs in the other semifinal, and a few days later, rode on Tikolo’s 147 to post a solid 241/7 against Bangladesh in the final. But the Tigers chased down a rain-revised target of 166 from 25 overs off the last ball to win by two wickets.

Scotland also made it to their first World Cup, by virtue of a 51-run win over Ireland in the third-place playoff. Unlike Bangladesh, who had played 30 ODIs since 1985-86 (winning just once), the Scots, under the captaincy of George Salmond, were yet to play an ODI coming into the 1999 World Cup. Primarily played in England, the 1999 World Cup also saw matches in Ireland, Scotland, Wales and the Netherlands.

Placed in Group A, Kenya could not repeat the magic they had woven at Pune in 1996. Led by Aasif Karim, they began with a five-wicket defeat to Zimbabwe, and went on to lose to England (by nine wickets), India (94 runs), South Africa (seven wickets) and Sri Lanka (45 runs). The silver lining was an ODI record sixth-wicket stand worth 161 between Odumbe (82) and Alpesh Vadher (73*) against Sri Lanka.

Bangladesh endured a torrid start in Group B, getting bowled out for only 116 in a six-wicket defeat to New Zealand at Chelmsford, and for 182 in a seven-wicket defeat to the West Indies at Dublin (in what was the first men’s ODI to be played on Irish soil). Their third game was against fellow first-timers Scotland, who had lost to Australia by six wickets and to Pakistan by 94 runs in their first two outings.

Edinburgh played host to this clash – the first time that Scotland was witnessing an ODI match – that presented both teams with their best chance to notch a win. As was the case against Pakistan, whom they had reduced to 92/5 before squandering the advantage, Scotland began brightly, with seamers John Blain (4/37) and Asim Butt demolishing the top order, including the scalp of captain Aminul Islam for a duck.

With Bangladesh tottering at 26/5, it was Minhajul Abedin (68*) who came to the rescue. He rallied with the lower order to push the total to 185/9, after which the bowlers completed the turnaround by scripting a 22-run win for the Tigers. Southpaw Gavin Hamilton, fresh off a 76 against Pakistan, led another one-man show by scoring 63, and went on to play his only Test for England six months later.

Scotland’s batting nosedived further in their last two games, as they were dismissed for 68 and 121 to suffer defeats by eight wickets and six wickets to the West Indies and New Zealand respectively. Bangladesh’s fourth game was hardly any better, what with Australia chasing down a target of 179 within 20 overs to win by seven wickets. Abedin (53*) dropped anchor with his second unbeaten fifty.

The Tigers’ last fixture, against an undefeated Pakistan at Northampton, was expected to be another mismatch, especially after they were inserted. But an opening stand of 69 between Shahriar Hossain and Mehrab Hossain, helped by a generous number of extras, was a sign of the things to come. Saqlain Mushtaq took 5/35, but Bangladesh posted a competitive 223/9 (Akram Khan top-scoring with 42).

Medium pacer Khaled Mahmud (3/31), who had earlier hit a breezy 27, did the star turn with the ball by removing Shahid Afridi, Inzamam-ul-Haq and Saleem Malik in his opening spell. A shell-shocked Pakistan never recovered from a dire 42/5, and limped to 161 in the 45th over, much to the jubilation of the Bangladeshi players and fans. Bangladesh were, rather prematurely, awarded Test status in June 2000.

One thought on “Specials – Associate nations at the World Cup, Part 3”