With the 2019 World Cup almost upon us, it is great time to rewind to two decades back, when England last hosted the showpiece event. Besides featuring some riveting contests and quality performances, the 1999 World Cup, played primarily in England with a few fixtures in Ireland, Scotland, Wales and the Netherlands, was also memorable for showcasing arguably the best kits seen at an ODI tournament.

Be it Australia’s bright yellow with the five stars of the Southern Cross, New Zealand’s teal with ferns in the centre or Sri Lanka’s giant golden lion emblazoned on navy blue, the 1999 World Cup jerseys continue to provide great nostalgic value to followers of the game around the world. Adding to the nostalgia, here is the first of a five-part series looking back at the matches that shaped the 1999 World Cup.

England ignited hopes of a promising campaign among their supporters with a robust display against defending champions Sri Lanka in the tournament opener on May 14. Sanath Jayasuriya, who was named Player of the Tournament in the 1996 edition for his belligerent hitting, belied his natural style to forge a watchful opening stand of 42 with Roshan Mahanama after Alec Stewart had opted to field.

However, Mahanama’s dismissal to Alan Mullally triggered a collapse of five wickets in just eight overs, leaving Sri Lanka in disarray at 65/5. Mullally (4/37) was at the forefront, what with the key scalps of Jayasuriya and Aravinda de Silva in successive overs, and was ably supported by fellow seamers Ian Austin and Mark Ealham. It was left to wicketkeeper Romesh Kaluwitharana to salvage the innings.

Kaluwitharana’s 57 and his fifth-wicket stand of 84 with captain Arjuna Ranatunga led a recovery, before he became Mullally’s fourth victim. With the conditions now better for batting, Sri Lanka’s eventual total of 204 was comfortably overhauled by England, who rode on a second-wicket partnership of 125 between Stewart (88) and Graeme Hick (73*) to achieve victory by eight wickets with 19 balls remaining.

A third-place finish at the 1997 ICC Trophy – as the World Cup Qualifier was then known – earned Scotland a maiden World Cup berth. Their first match, against Australia at New Road, was also their first ever ODI appearance. Captained by George Salmond, the Scots were put in to bat by Steve Waugh, and duly struggled against an attack including Glenn McGrath, Damien Fleming and Shane Warne.

As it turned out, they batted their 50 overs, totalling a modest 181/7. Gavin Hamilton, who would soon go on to play a solitary Test for England, scored 34, while Mr. Extras contributed a generous 39. Steered by Mark Waugh (67), Australia won by six wickets, but not before consuming 44.5 overs. Off-spinner Nick Dyer took 2/43, while left-arm pacer Asim Butt returned a miserly 1/21 from his ten overs.

Smarting from a four-wicket defeat to South Africa in their first match, India were keen to make amends. Zimbabwe wobbled to 87/3 after being inserted, before the reliable Flower brothers – Grant and Andy – combined to add 57. Grant perished for 45, but Andy put on another 60 for the fifth wicket with captain Alistair Campbell. Andy’s 68*, helped by a whopping 51 extras, pushed Zimbabwe to 252/9.

A slow over rate dented India significantly – they had four overs reduced from their innings as a consequence. With Sachin Tendulkar, who had flown back to attend his father’s funeral, missing from the eleven, India slipped to 56/3 after nine overs. But Tendulkar’s replacement Sadagoppan Ramesh (55) was up to the task, as he steadied the ship by sharing in a fourth-wicket stand of 99 with Ajay Jadeja. 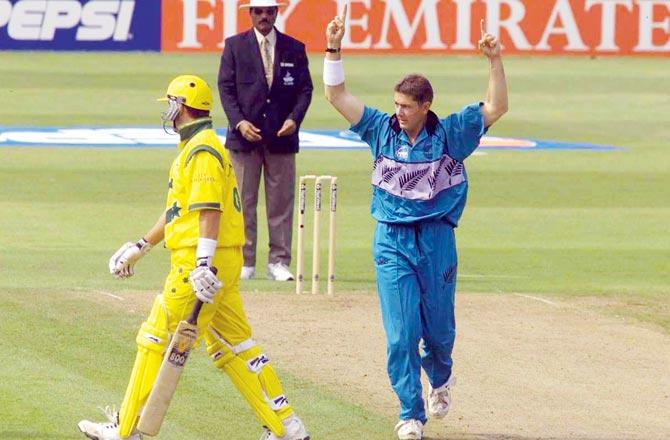 Though India fell to 175/6, Robin Singh and Nayan Mongia kept the chase on track, and only nine runs were needed from two overs with three wickets left. But paceman Henry Olonga (3/22) had other ideas  – off the second ball of the 45th over, he had Singh caught at cover. Off the fourth, he castled Javagal Srinath. Off the sixth, he had Venkatesh Prasad LBW, thus sealing a three-run win for Zimbabwe.

The fourth quarterfinal of the 1996 World Cup had seen Mark Waugh smash 110 to help Australia chase down a target of 287 against New Zealand. Things were different three years later, as Waugh was out leg-before to left-arm seamer Geoff Allott in the third over itself. With the conditions at Sophia Gardens conducive for swing, Allott also accounted for Adam Gilchrist soon after to make the score 32/2.

Ricky Ponting and Darren Lehmann (76) built a solid third-wicket alliance of 94, but the batsmen to follow could not accelerate enough for a formidable total. Allott (4/37) added the wickets of Michael Bevan and Shane Warne to his kitty in the closing overs, ensuring that Australia were kept to 213/8. New Zealand too got off to a poor start, as Adam Dale removed Matthew Horne with five runs on the board.

New Zealand suffered a slump to 49/4, and with Nathan Astle and skipper Stephen Fleming back in the hut, Australia had gained the upper hand. Chris Cairns joined Roger Twose at this stage, and the pair scripted a turnaround by adding 148 for the fifth wicket. While Cairns fell for 60,  the left-handed Twose stayed unbeaten on 80, hitting the four that secured New Zealand’s five-wicket win with 28 balls to spare.