Hong Kong have earlier been part of two editions of the Asia Cup, in 2004 and 2008. As we await Hong Kong’s opening fixture against Pakistan, here is a brief look back at their trysts with the continental tournament.

The eighth edition of the Asia Cup featured an unprecedented six teams. The four full members were joined by the United Arab Emirates and Hong Kong, the leading Asian Associate nations, with the teams divided into two groups of three each. While the UAE had played ODI cricket before (most notably in the 1996 World Cup), this tournament marked Hong Kong’s maiden appearance at the highest level.

Hong Kong thus made their ODI debut on July 16, 2004, facing Bangladesh in the opening Group A clash at the Sinhalese Sports Club in Colombo. They were captained by Rahul Sharma, a 43-year-old top-order batsman who became the fourth-oldest man to play in an ODI. Sharma had played a solitary first-class match earlier, for Delhi against Himachal Pradesh in the 1986-87 Ranji Trophy.

Hong Kong began brightly after deciding to field, as medium pacer Afzaal Haider removed Mohammad Ashraful with ten runs on the board. Javed Omar (68) and captain Habibul Bashar shared 85 for the second wicket, but thereafter, the Hong Kong bowlers dealt timely blows to stall the Tigers’ progress. Off-spinner Ilyas Gull (3/46) was particularly impressive, and his spell sent the score from 123/2 to 167/6.

Bangladesh finished at a modest 221/9. Hong Kong were on the back foot from the moment the score fell to 15/2, which later became 67/7 and finally crawled to 105 in the 46th over. Tabarak Dar top-scored with 20, while left-arm spinner Abdur Razzak (3/17) starred on debut for Bangladesh. Another left-arm spinner, Mohammad Rafique, took the last wicket in his 11th over due to an umpiring oversight. 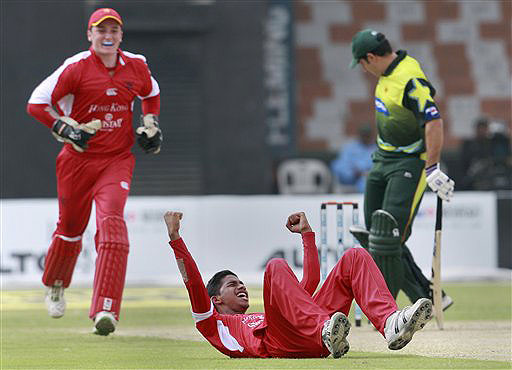 Hong Kong’s Nadeem Ahmed (on the ground) is jubilant after dismissing Pakistan’s Misbah-ul-Haq in 2008, while Jamie Atkinson rushes towards him (source – ndtv.com)

The 2008 edition involved the same format and the same teams. Hong Kong, led by Tabarak Dar, were clubbed in Group B this time, with Pakistan and India. Both their matches were played at the National Stadium in Karachi. As was the case in 2004, Haider opened the bowling for Hong Kong, and he made an immediate impact, having Salman Butt caught behind by Jamie Atkinson for a duck off his third ball.

Younis Khan scored an attacking 67, and his third-wicket alliance with Mohammad Yousuf had fetched a quick 54 runs when the latter perished to Multan-born left-arm spinner Nadeem Ahmed to make the score 121/3. Nadeem, who debuted in the 2004 game against Pakistan as a 16-year-old and is a part of Hong Kong’s squad for the 2018 edition, proceeded to befuddle the middle order with a fine spell.

Nadeem (4/51) had Younis stumped 14 runs later, soon after which he added the scalps of Misbah-ul-Haq and Shahid Afridi. Sarfraz Ahmed’s run out compounded Pakistan’s woes, and the score had now nosedived to 161/7 in the 30th over, much to Hong Kong’s delight. Frustratingly, Hong Kong failed to finish things off, as Fawad Alam (63*) and Sohail Tanvir (59) combined for an eighth-wicket stand worth 100.

This rescue act helped Pakistan post a sturdy 288/9, a total which proved beyond reach for Hong Kong. Dar (24), opening the innings, tried to hold the top order together after the score had fallen to 45/4, and Zain Abbas scored a solid 26 before retiring hurt, but all it did was reduce the eventual margin of defeat. The end came at 133 in the 38th over, when Nadeem was dismissed by Alam’s left-arm spin.

Hong Kong had their moments against Pakistan, and that was as good as it got for them. India, propelled by captain MS Dhoni (109), Suresh Raina (101) and Virender Sehwag (78) smote a gargantuan 374/4 the next day, to which Hong Kong replied with a feeble 118 in 36.5 overs. The 256-run margin gave India their second-biggest ODI win. The next time Hong Kong played an ODI was against Afghanistan in 2014.