The Rangiri Dambulla International Stadium is scheduled to host the first two ODIs of the five-match series between Sri Lanka and South Africa, starting from today. The ground holds a unique place among Sri Lankan venues, in that it has only hosted ODI matches since its international debut in 2000-01 (though four T20Is between Hong Kong and Nepal in 2014-15 were abandoned without a a ball bowled).

Dambulla hosted ODIs with regularity between 2003 and 2010, before criticism of its floodlights led to a barren three-year period. Since its return in 2013-14, the ground has had sporadic appearances, hosting only eight ODIs. Overall, Dambulla has hosted 51 ODIs, of which 41 have featured Sri Lanka. Here is a brief look back at five of the most exciting ODIs contested at the picturesque stadium over the years.

A win for Sri Lanka would have sealed their spot in the final of this tri-series, also featuring Pakistan. However, they failed to achieve a modest target. New Zealand fell to 88/6 after being inserted, before Brendon McCullum (47*) took the total to 156/8. Having limped to 79/5 in the 25th over, the hosts’ innings never got going, and wound up at 147 in 49.1 overs. Daniel Vettori snared 4/14 with his left-arm spin.

Captain Marvan Atapattu (47) and Sanath Jayasuriya (55) put on 121 for the first wicket, but the left-arm spin of Michael Clarke (5/35) helped bowl Sri Lanka out for 245. In reply, Matthew Hayden (93) and captain Ricky Ponting (69) added 148 for the second wicket, before the latter’s wicket changed the game. Australia needed eight from the last over, but Chaminda Vaas (3/48) kept his nerve to limit them to 244/5.

Sourav Ganguly (51) steered India to 117/1 in the 30th over, but could not accelerate enough for a big total. Led by the off-spin of Tillekaratne Dilshan (4/29), the Sri Lankan bowlers kept the total to 220/8. The hosts collapsed from 78/2 to 95/6 in response, before a seventh-wicket stand of 126 by Mahela Jayawardene (94*) and Upul Chandana (44*) gave them a remarkable victory with two overs to spare. 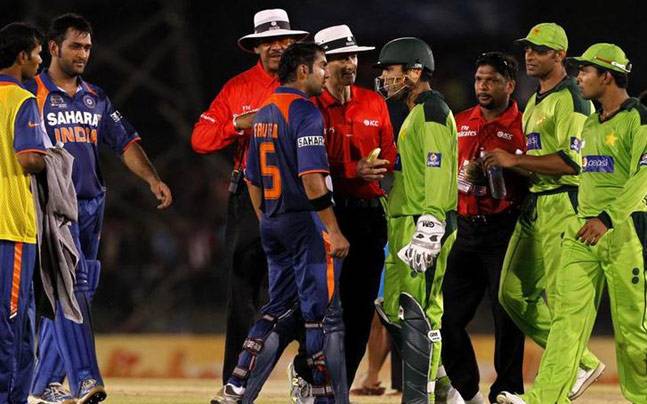 Sri Lanka began their Asia Cup defence by posting 242/8, served by Mahela Jayawardene (54) and Angelo Mathews (55*). Pacers Lasith Malinga and Mathews then reduced Pakistan to 32/4. Captain Shahid Afridi launched a counterattack, and when he was seventh out for a 76-ball 109, Pakistan needed 38 in 55 balls. Malinga (5/34) had the final say, as he mopped up the tail to end the chase in 47 overs.

This clash of the arch-rivals had its fair share of turbulent incidents. In the end, India prevailed to knock Pakistan out. Pakistan put up 267 after electing to bat, with Salman Butt scoring 74. Gautam Gambhir led India’s reply with 83, while skipper MS Dhoni scored 56. It all boiled down to the last over, with India needing seven. With three needed off two balls, Harbhajan Singh clouted Mohammad Amir for six.