England’s 5-0 demolition of Australia was only their second instance of winning every game in a five-match ODI series, the first having come in Zimbabwe back in October 2001. A beleaguered England entered this series on the back of 11 consecutive ODI defeats, including six in the 2001 NatWest triangular series at home, which involved two strong outfits in the form of Australia and Pakistan.

Zimbabwe held a commendable ODI record against England prior to this series, winning seven out of 16 games, and had it in them to topple England, as they had shown multiple times in the past. However, they were plagued by internal issues, as the conflict between the Zimbabwe Cricket Union – that was keen to increase the number of black players in the team – and senior white players came to the fore.

Moreover, there was also a pay dispute looming over Zimbabwean cricket, and the resultant effect of this negativity showed on the field, as the hosts produced a lacklustre display, stretching their winless streak in ODIs to 12 by the time the series ended. England’s tour began with a 138-run win against Zimbabwe A, with Graham Thorpe (95) and Ben Hollioake (61) taking their team from 61/5 to 262/8.

Led by Nasser Hussain, England began the series on a strong note, securing a five-wicket win in the first ODI at the Harare Sports Club. They fielded four debutants, namely Jeremy Snape, James Foster, Matthew Hoggard and James Kirtley. While pacers Hoggard and Kirtley took two wickets each, it was the off-spin of Snape and part-timer Mark Ramprakash that stifled the Zimbabweans.

Having brought Zimbabwe’s innings back on track through a third-wicket stand of 77 with Stuart Carlisle, the dangerous Andy Flower was well placed on 59 when he was out stumped by Foster off Snape to make the score 126/4 in the 31st over. Two balls later, Snape dismissed Andy’s younger brother Grant for a duck, again courtesy of a stumping, to put England firmly in control.

Snape and Ramprakash shared five wickets between them, with the latter taking 3/28, as Zimbabwe folded for 206 in the final over. England lost Marcus Trescothick in the fourth over, but Nick Knight (50) and Hussain (73) put on 98 for the second wicket to ensure a comfortable chase. England duly won by five wickets with 20 balls left. Snape was named man of the match for his crucial return of 2/39.

England dished out an even more clinical performance in the second of three games in Harare. Impressive figures of 3/37 from Hoggard helped bowl Zimbabwe, who elected to bat first again, out for a modest 195. Knight (82*) and Hussain (50) starred for the visitors again, adding 112 for the second wicket after Trescothick hit a quick 46. The victory came in the 38th over, for the loss of just two wickets.

The visitors sealed the series with a four-wicket win in the third game, though the day belonged to Andy Flower. Zimbabwe slumped to 19/3, and then to 127/6, before Flower and captain Heath Streak (57) fought back with a 130-run stand for the seventh wicket. Flower, who came in at 7/2 in the fourth over, remained unbeaten on 142 from 128 balls, then the joint highest ODI score by a Zimbabwean.

Flower’s brilliance carried Zimbabwe to 261/8, even as Hoggard (5/49) continued the productive start to his ODI career. In reply, Knight (41) and Ramprakash (47) added 67 for the second wicket, taking advantage of a thinned bowling attack – Streak could not bowl, as he injured his leg while batting. Andrew Flintoff (46) came in at a tricky 126/4, and joined Paul Collingwood for a fifth-wicket alliance worth 72.

Flintoff was sixth out at 214, at which point England still required 48 from 59 balls. Hussain batted at number seven because of a calf injury, and in the company of Snape, steered England closer to the target. The pair shared an unbroken 51 for the seventh wicket off only 44 balls, as England completed the series-clinching victory with 15 balls left. Flower was deservedly named man of the match.

The action for the final two games moved to the Queens Sports Club in Bulawayo, but the change in venue could not bring about a change in Zimbabwe’s fortunes. With Hussain and Streak injured, both sides saw a change of captain as well for the fourth game. Trescothick took charge of England, while Alistair Campbell became Zimbabwe’s third captain of the series (Guy Whittall led in the first ODI). 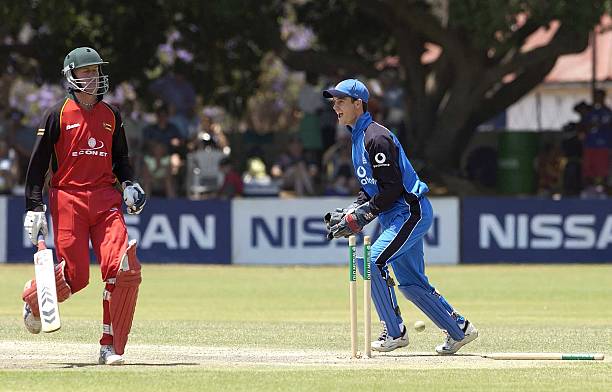 England were given the perfect start after they won the toss, as Trescothick (52) and Knight (49) ran up an opening stand of 101 within 15 overs. The off-spin of Douglas Marillier (4/38) soon reduced the score to 144/4, but Collingwood (77) and Flintoff (46) regained the momentum with a 97-run fifth-wicket partnership. The innings eventually drew to a close with a total of 280/9 on the board.

Grant Flower spearheaded Zimbabwe’s reply, holding one end even as the score slid to 94/3 in the 20th over. Flower and Craig Wishart added 75 for the fourth wicket, until the former was stumped off left-arm spinner Paul Grayson (3/40) for a 101-ball 96. Zimbabwe went into a meltdown after Flower’s dismissal and were condemned to 210 in the 45th over, the last seven wickets falling for 41.

England completed the last rites with a facile seven-wicket win in the last game, with another Zimbabwean century, this time from Grant Flower, going in vain. Flower, opening the innings again, scored 104 in 137 balls, but could not help Zimbabwe muster more than 228. Once again, Zimbabwe squandered a reasonably stable position – they lost their last six wickets for only 24 runs in 35 balls.

The returning Hussain (47) combined with Knight for a second-wicket stand of 87 to deflate Zimbabwe. Knight remained unbeaten on 80, further adding 78* for the fourth wicket with Collingwood (56*), as England coasted to a clean sweep with 38 balls to spare. Knight was named man of the series for his tally of 302 at 100.66. Hoggard ended as the leading wicket-taker, with ten victims at 13.90 apiece.

Between their first and second 5-0 successes, England were at the receiving end of such a whitewash thrice in ODIs. The first instance was perhaps the most galling – at home against a rampant Sri Lankan side in 2006. This was followed by two successive 5-0 defeats in India; in 2008-09 (when a scheduled seven-match series was curtailed by two due to the terror attacks in Mumbai) and 2011-12.