Calypso music has always been an integral part of Caribbean cricket. The steel bands at cricket grounds in the West Indies, with their own distinctive charm, have lent a refreshing dimension to many a match played in the region. Not surprisingly, the history of West Indian cricket is replete with timeless calypsos dedicated to this great game. Here are five of the best. 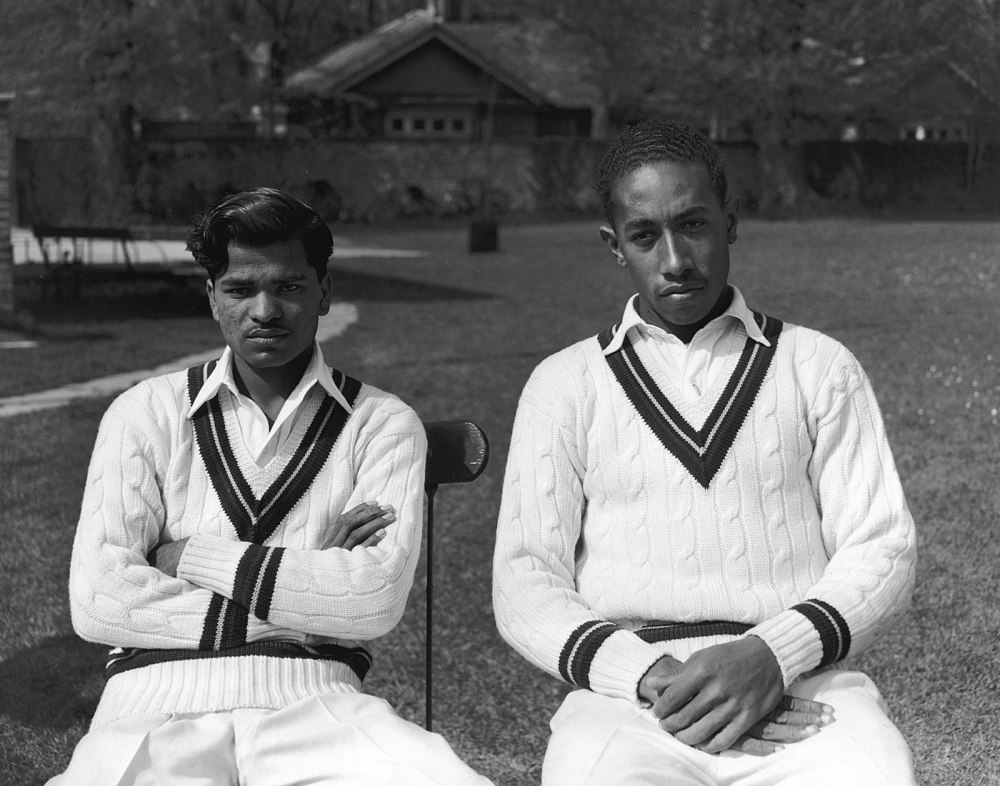 Spin twins Sonny Ramadhin and Alf Valentine bowled the West Indies to a path-breaking win at Lord’s at 1950, inspiring one of the best calypsos on cricket (source – gettyimages)

June 29, 1950 marked a watershed day for Caribbean cricket, as the West Indies slayed England by 326 runs at Lord’s to record their maiden win in the mother country. Central to this performance was the spin duo of Sonny Ramadhin and Alf Valentine. Off-spinner Ramadhin destroyed the hosts with match figures of 11/152, while left-armer Valentine was not too far behind, taking 7/127.

The fact that both men were aged just 20 and playing in only their second Test made the feat more remarkable. This win led Egbert Moore, better known as Lord Beginner, to compose “Victory Test Match”, commencing with the famous words ‘Cricket Lovely Cricket’. He immortalised the young match-winners with the line, ‘With those little pals of mine, Ramadhin and Valentine.’

Through this calypso, Aldwin Roberts, better known as Lord Kitchener, pays tribute to England’s Alec Bedser, whose accurate medium-fast pace earned him 236 wickets at 24.89 in a successful career from 1946 to 1955. The song highlights Bedser’s career-best 14 for 99 (7/55 and 7/44) in the first Test of the ‘Coronation Ashes’ at Trent Bridge in 1953. Besder went on to take 39 wickets in the series.

‘Kitch’ is in his element in this delightful description of the second Test of the 1966 Wisden Trophy at Lord’s. When the fifth wicket of their second innings fell early on the fourth day, the West Indies were leading by just nine. However, captain Garfield Sobers (163*) and his cousin David Holford (105*) put on an unbroken 274 for the sixth wicket to ensure the safety of a draw.

This is another calypso where praise is showered on the legendary Sobers. The following lines are used to emphasise Sobers’ greatness: ‘Who’s the greatest cricketer on Earth or Mars? Anyone can tell you, it’s the great Sir Garfield Sobers! This handsome Barbadian lad really knows his work. Batting or bowling, he’s the cricket King, no joke! Three cheers for Captain Sobers!’

This is arguably the finest calypso on the list. The 1970-71 tour of the Caribbean was one of the landmark moments in Indian cricket history, as Ajit Wadekar’s men secured a historic 1-0 win in the five-match series. The ‘little master’ Sunil Gavaskar, all of 21 years and in his debut series, logged an astounding 774 runs at 154.8, including 65 and 67* in India’s triumph at Port-of-Spain.

The Gavaskar Calypso, written and sung by Lord Relator (born Willard Harris), is an apt tribute to this performance. Not only the vocals and the catchy beat throughout the song are glorious, but the lyrics are also delightfully rhymed and pleasing to the ear. It is not an easy task, but Relator has effortlessly used all the names of the touring Indian side to conjure a wonderful melody.

The moment the song starts with ‘A lovely day for cricket’, it has the listener captivated for the next five minutes. The chorus goes ‘It was Gavaskar, the real master…just like a wall, we couldn’t out Gavaskar at all…not at all, you know the West Indies couldn’t out Gavaskar at all’. The tunes between the verses are tantalising, and it is Calypso music at its very best.

Relator then goes on to criticise the West Indies team, and picks on then captain Sobers with the lines ‘But Sobers as the captain, he want plenty coachin’…before we cricket end up in a disgrace’. Little did he know that the West Indies would go on to rule the world of cricket in a few years’ time! The song was voted at No.68 in a ‘Calypso of the 20th Century’ poll.