Pakistan, under new captain Saeed Anwar, were looking for redemption on their home turf following a 3-0 whitewash defeat in Australia. The Sri Lankans however had started the tour on a positive note, sweeping the ODI series 3-0, and aimed at repeating the success of their last Test series in Pakistan – a 2-1 victory in 1995-96.

Sanath Jayasuriya, who took over Sri Lanka’s captaincy after the 1999 World Cup, had since led the side to series wins over Australia at home and in Zimbabwe. The opening Test began at the Rawalpindi Cricket Stadium on 26th February, 2000, with Younis Khan, aged 22, debuting for the hosts. Veteran Aravinda de Silva was back in the Sri Lankan team after being left out of the ODI squad.

Jayasuriya called correctly and inserted Pakistan, in the hope that his new ball pair of left-arm seamers, Chaminda Vaas and Nuwan Zoysa, would exploit the early movement on offer. Openers Anwar and Wajahatullah Wasti had progressed well to 44/0, when the former perished to Vaas, caught by Russel Arnold in the slips.

In his next over, Vaas added the scalp of Aamir Sohail, caught behind by Romesh Kaluwitharana for a duck. Wasti fell soon after to Pramodya Wickremasinghe, giving Arnold his second catch, and Pakistan went to lunch at a shaky 65/3. Inzamam-ul-Haq and Yousuf Youhana put on 66 for the fourth wicket, but that was to be the only glimmer of a fightback from the hosts.

Inzamam was fourth out for 44 – the top score of the innings – with the total at 125, again caught by Arnold off Wickremasinghe. The Pakistani innings went into a meltdown from hereon, as the pace-spin duo of Wickremasinghe (4/37) and Muttiah Muralitharan (4/45) combined to extract the remaining batsmen. The innings wound up at 182; the last five wickets falling for 16 runs. 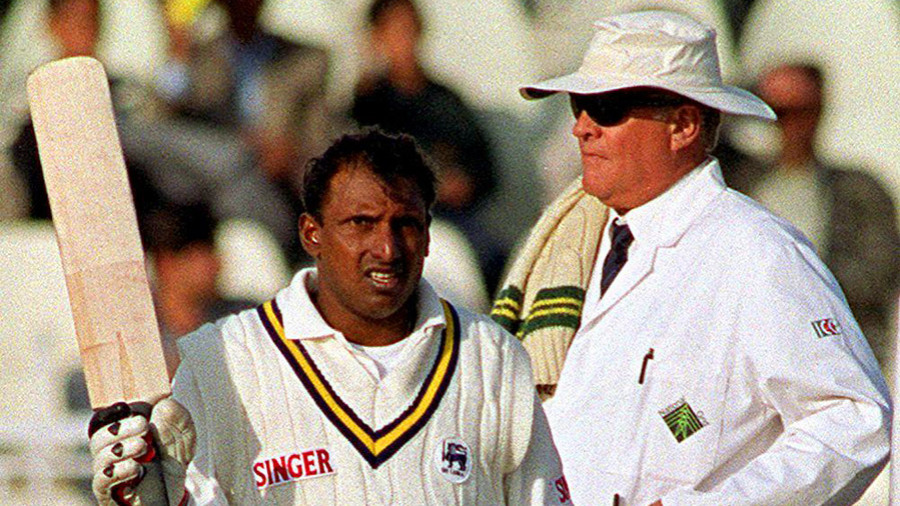 Aravinda de Silva was named man of the match at Rawalpindi, for his knock of 112 in the first innings (source – AFP/espncricinfo.com)

Pakistan found themselves a bowler short early in the innings when Wasim Akram went off due to a groin strain after just 13 deliveries. Nevertheless, the Sri Lankan opening pair of Marvan Atapattu and Jayasuriya did not last long, as Waqar Younis removed both of them to have the visitors at 52/2 by close of play.

Arnold became Waqar’s third victim early on the second day, caught behind by Moin Khan. Mahela Jayawardene walked in at 69/3 and unleashed himself on the bowlers with a stylish 42, before getting run out nine overs before lunch. The old warhorse Arjuna Ranatunga, now in the twilight of his career, joined de Silva at 117/4 and the duo proceeded to give Sri Lanka the upper hand.

Ranatunga, dropped by Moin before he had opened his account, was the ideal foil for de Silva as their fifth-wicket partnership realised 129. De Silva reached his 18th Test hundred, which was his eighth against Pakistan. The partnership was ended by 20-year-old Abdul Razzaq, who castled Ranatunga for 49 and then had Kaluwitharana out leg-before the very next ball.

Much to Pakistan’s relief, Saqlain Mushtaq gave them a further boost just before stumps, taking two wickets in three balls. The first of them was that of de Silva, struck on the pads for a sublime 112 off 276 balls, including 12 fours. Sri Lanka had the edge by the end of second day as they finished at 290/8.

Vaas frustrated the hosts the following morning, hitting an entertaining 53* to extend his team’s advantage. The last two wickets fetched 73 runs and took the total to 353, thus giving Sri Lanka a dominating lead of 171. Waqar bowled with purpose to collect 4/103, but the onus was now on the Pakistan batsmen to overturn the deficit and help their side find a way back.

Zoysa struck in his second over, having Wasti caught by Wickremasinghe at deep square leg. Anwar soothed Pakistani nerves by batting with assurance, sharing in vital stands of 63 for the second wicket with Sohail and 64 for the third wicket with Inzamam. However, Sri Lanka were rewarded with two big wickets in the final session of the day, thus strengthening their grip on the Test. 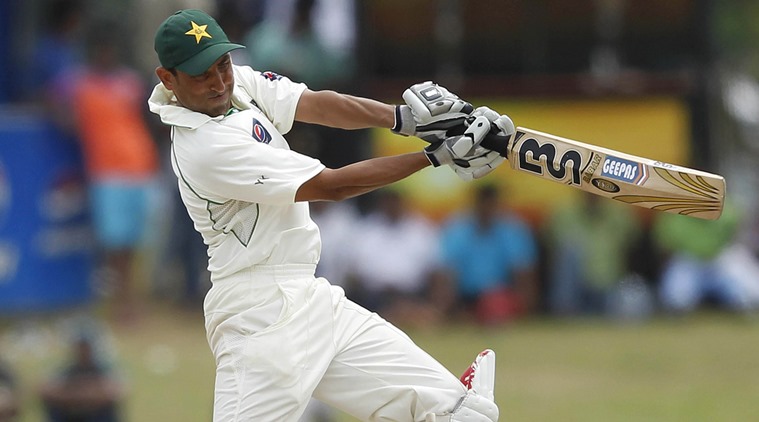 Younis Khan scored a century on Test debut to bring Pakistan back into the contest (source – indianexpress.com)

Inzamam had dug in well before he slashed one to point, where substitute fielder Upul Chandana made no mistake. Twelve overs later, Anwar was bowled by Vaas, ending a resolute innings of 84 from 219 balls. Stumps were called with Pakistan at 154/4, still 17 in arrears. Sri Lanka were the clear favourites, especially with the threat of Muralitharan looming large.

Sri Lanka seemed to be steadily marching towards a fourth-day win after taking four more wickets for 67 runs. Two overs after lunch, Wasim joined the debutant Younis at 236/8; Pakistan were ahead by just 65. Younis, who came in at the fall of the fifth wicket, was increasingly looking composed at the crease, and made the most of de Silva’s drop in the slips when he was on 42.

What followed was a magnificent rearguard partnership between the newbie and the old pro. Together, Younis and Wasim, who batted with a runner, dragged the innings to the fag end of the day through their ninth-wicket alliance of 165, giving Pakistan a fighting chance. The stand was broken after nearly 50 overs, when Wasim fell to Muralitharan for 79, caught by Jayawardene at short leg.

Younis was dismissed soon after with the score at 390, caught in the covers by de Silva off Muralitharan, who took four wickets to end with match figures of 8/172. His effort of 107 from 250 balls, studded with 11 fours, was the seventh instance of a Pakistani batsman scoring a century on Test debut. Set 220 to win, Sri Lanka began what promised to be an exciting final day at 11/0.

Waqar again provided Pakistan with a bright start, having Atapattu and Arnold caught by Saqlain in the slips to leave Sri Lanka at 34/2. Razzaq made it three down just before lunch, inducing de Silva to edge one behind the wicket, even as Jayasuriya held fort at one end. With two sessions remaining in the Test, Sri Lanka required 143 to win with seven wickets in hand.

The Sri Lankan skipper scored 56 and added 43 for the fourth wicket with Jayawardene, until he too became a victim to the impressive Razzaq, pouched by Sohail in the slips. Moments after tea, a well-settled Jayawardene was fifth out with the score at 144, as he drove Saqlain to Youhana at short leg. The jitters were compounded when, two runs later, Ranatunga had to retire hurt. 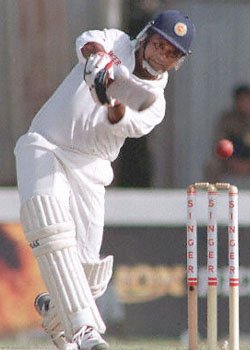 A lifter from Waqar struck Ranatunga on the hand, leaving him with a broken thumb that forced him off. Vaas came and went, run out for a duck thanks to a mix-up between him and Kaluwitharana, which left him stranded mid-pitch. Kaluwitharana, who got a reprieve when Waqar dropped him at mid on, and Zoysa then cautiously took the score to within 43 runs  of victory.

It was Razzaq who put Pakistan in front in again, taking the wickets of Zoysa, caught at slip by Wasti, and Wickremasinghe, bowled, in consecutive balls. Sri Lanka were now 177/8, and out walked Ranatunga, determined to defy his injury and steer his side home. Despite the pain, he kept the scoreboard ticking by looking to score behind the wicket whenever the opportunity arose.

There was a moment of panic at 209/8, when Ranatunga’s quest for a quick single nearly led to the run-out of Kaluwitharana, who was saved only because the throw to the wicketkeeper’s end was wide. The experienced pair rode their luck and kept their cool, before Kaluwitharana, with the score at 212/8, dispatched Waqar for two consecutive boundaries to seal a gripping two-wicket win.

De Silva was named man of the match for his first-innings hundred. The unbroken ninth-wicket stand between the courageous Ranatunga (29*) and Kaluwitharana (36*) fetched a priceless 43 runs, and although the former missed the rest of the series, Sri Lanka took the confidence into the second Test at Peshawar, where the series was secured with a 57-run win.

“As long as Ranatunga was there, we were convinced we could win. He played a gem of an innings, liked an injured tiger.”, said Jayasuriya after the game. Pakistan had the consolation of a handsome win by 222 runs at their fortress of Karachi in the third Test. Three months later, they made a trip to Sri Lanka for a return series, and got back at the islanders with a 2-0 victory.