South Africa had stormed to a 1-0 lead in the series with a ten-wicket win in the second Test at Lord’s, and came into the third, played at Old Trafford from July 2 to July 6, 1998, riding on a wave of confidence. The visitors replaced opener Adam Bacher and pace bowler Shaun Pollock, both of whom were nursing injuries, with Gerhardus Liebenberg and Makhaya Ntini respectively.

England, on the other hand, made three changes from the drubbing at Lord’s; Dean Headley and Mark Ealham made way for strike bowler Darren Gough, who was fit again, and uncapped Warwickshire left-arm spinner Ashley Giles, while Nick Knight came in for Stephen James to partner Michael Atherton at the top of the order.

Hansie Cronje won the toss and made the wise decision of batting first on a slow surface which had little for the fast bowlers. Gough provided an early breakthrough by castling Liebenberg, but thereafter, Gary Kirsten and Jacques Kallis combined to grind the English bowling into submission. The duo saw through the rest of the opening day and steered South Africa to 237/1 at close of play.

While the 22-year-old Kallis reached his second Test century on the first day, Kirsten completed the milestone early on day two. Together they stayed put for more than 96 overs, adding 238 for the second wicket, which was a new record for South Africa’s highest partnership for any wicket since their return from isolation. Kallis batted for nearly six hours before being bowled by Gough.

Kallis’ 132 came from 266 balls and featured 16 fours, but his wicket was but a speck of consolation for the toiling bowlers. Daryll Cullinan came in at number four, and along with Kirsten, further frustrated the hosts by batting dourly and resolutely, effectively snuffing out any hopes that England might have had of gaining the upper hand.

Kirsten went on to a maiden Test double hundred and was eventually out in the final session, caught behind by captain Alec Stewart off Angus Fraser, for a marathon knock of 210. He occupied the crease for ten hours and 50 minutes, then the longest Test innings by a South African batsman, faced 525 balls and hit 24 fours and a six. His third-wicket alliance with Cullinan fetched 176 runs.

Nine overs later, Cullinan perished after a defiant effort of his own, 75 in nearly five hours, thus giving 25-year-old Giles his first Test wicket. South Africa finished the day at 487/4 and seemingly on course to bat England out of the match. Cronje collected an unbeaten 69 in the first session of the third day, before declaring his team’s innings one ball short of 200 overs, the total reading 552/5.

With a considerable challenge staring them in the face, England’s batsmen let their supporters down, succumbing to pace and spin alike. The tearaway Allan Donald applied the pressure first up, snaring Nick Knight and Nasser Hussain to leave England at 34/2. The seasoned pair of Atherton and Stewart dug in to add 60 for the third wicket, before the former was dismissed.

Atherton was caught behind by Mark Boucher, who pouched his third catch, off Ntini, the first black cricketer to play for South Africa. His 41 would remain the highest score of the innings. Stewart was soon bowled by Kallis, and the score was now 108/4. To worsen matters for England, Graham Thorpe was fighting a back injury and had to be shifted down the order.

Left-arm chinaman bowler Paul Adams, known for his ‘frog in a blender’ action, took care of the middle order, scalping three wickets, including that of Thorpe for a duck, to tighten the noose around England. The hosts endured another torrid day, ending at 162/8 and were presumably down for the count. They were duly bundled out for 183 the next morning, with Adams returning 4/63.

With England 369 runs behind and close to five sessions left in the game, Cronje had no hesitation in imposing the follow-on. The start to the second innings was woeful – Knight, caught behind off Donald, and Hussain, cleaned up by Kallis, were again back in the hut cheaply. For the second time in as many days, Atherton and Stewart were under the pump to salvage a fast-sinking ship. 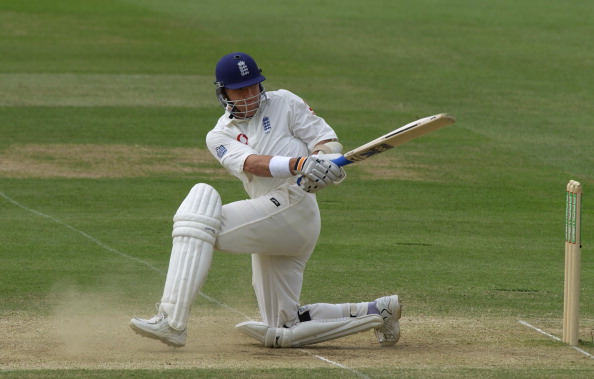 England’s aggregate in their last three Test innings was fifteen runs less than South Africa’s first innings total here, and they now found themselves 11/2 against a charged-up bowling attack. To say they were in dire straits would be an understatement. The pair in the middle was utterly crucial for England in the context of the game, what with Thorpe’s lack of fitness.

Atherton and Stewart delivered when it mattered the most, ensuring that the South Africans would not find any further success on the fourth day. Stewart was relatively brisker, and reached his century in the final session, remaining unbeaten on 115 at stumps. England began the final day in a much safer position, at 211/2, but by no means they were out of the woods yet.

England were now trailing by 158, and with eight wickets still in the bank, they had reason to be optimistic of saving the Test as the fifth day commenced. Atherton, eyeing a hundred of his own, and Stewart prodded along with prudence, before the former was taken out halfway through the first session, caught by Ntini off Kallis for a valuable 89, which ate up over six hours and 280 balls.

The third-wicket stand between Atherton and Stewart realised 226 runs, and more importantly, saw off 83 overs. Mark Ramprakash joined his captain at the fall of the third wicket, and as was expected, went into an uber-defensive mode right away. The total had inched to 293/3 an hour after lunch, with England still 76 short of making South Africa bat again, when Stewart finally buckled.

England’s unflinching wicketkeeper-captain had done his bit for the team, batting out close to seven hours for a valiant 164 from 317 balls, with 24 fours. Like Atherton, he fell playing the hook shot, caught by Klusener off the indefatigable Donald. This key wicket doubtlessly reignited the ‘White Lightning’, as Donald was known, and he proceeded to give England a rude jolt.

Thorpe capped a sorry Test with his second duck, bowled by Donald in his next over. To add to England’s distress, Adams ejected Dominic Cork soon after, and the score was now 296/6 – three wickets had fallen for as many runs in as many overs. Glamorgan’s Robert Croft joined Ramprakash, and another 20 overs were cleared before Donald had the latter leg before wicket.

Speedster Allan Donald bowled his heart out for South Africa in the second innings, taking 6/88 from 40 overs (source – gettyimages)

‘Ramps’ held fort for over three hours, scoring 34. Fours over later, Donald collected his fifth victim in the form of Giles. England were now 329/8, with more than 25 overs left to be negotiated. Croft began to show that he was no pushover, stodgily defying whatever the South Africans threw at him. He found support in an equally obstinate Gough, and they set about to thwart the tiring visitors.

Croft and Gough battled for more than 20 overs and 75 minutes, but when Gough was out, caught by Kirsten off Donald, there yet remained 7.1 overs and England were still two runs away from forcing the fourth innings. However, Croft was unmoved; he levelled the scores amid rising tension, thus covering two more overs, for the change of innings.

Fraser, the number eleven, played out 13 deliveries at the other end without opening his account, and this last pair had somehow survived for 31 balls to deny South Africa. The draw was ensured in the penultimate over, as even if a wicket had fallen in the last over, South Africa would not have had sufficient time to bat. The Test finished with scores level as England dragged to 369/9 in 171 overs.

Croft remained unbeaten on a heroic 37 from 125 balls, absorbing the pressure for three hours and ten minutes. Donald led the way for the South Africans, who were on the field for 253.1 overs, with figures of 6/88 in 40 overs. The choice of Kallis as man of the match was perhaps a wee bit surprising, though there is no denying the vital all-round role he played.

Inspired by this epic escape, England produced a high-impact performance in the fourth Test at Trent Bridge, winning by eight wickets. It all boiled down to the decider at Headingley, which turned to be a gripping low-scorer that the hosts pinched by 23 runs, culminating in a special, come-from-behind series victory.