Plucky Irish all-rounder Alex Cusack decided to call it quits yesterday after an eight-year career that coincided with Ireland’s rise as an international force to reckon with. Known for his stifling medium-pace and useful lower-order batting, the 34-year-old Brisbane-born cricketer was part of quite a few memorable wins for his adopted country.

Overall, he turned out 174 times for Ireland. Though more suited to the limited-overs formats, he also proved his worth in the Intercontinental Cup, scoring 852 runs at 40.50 including a century in his maiden first-class appearance.

In this post, we look back at six of Cusack’s most significant performances across all formats, in chronological order.

Ireland invited South Africa for a one-off ODI just three months after first facing them during their memorable 2007 World Cup campaign. The hosts, after electing to field, kept South Africa to 173/4 in the allotted 31 overs, the match reduced due to a rain delay.

Cusack, playing his first ODI, was the last of seven bowlers used by Irish captain Trent Johnston, and he underlined his talent with a disciplined spell of 3/15 in four overs. Placed at 136/1 in the 26th over, South Africa were aiming for a flourishing finish when Cusack removed Morne van Wyk (52) in his second over. 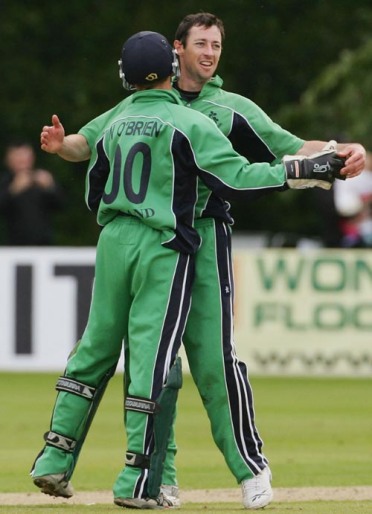 He went on to scalp star batsmen Jacques Kallis and Herschelle Gibbs as well, respectively in his final two overs. Ireland got off to a sound start as they reached 45/0 in the tenth over but soon crashed to 56/4, which brought Cusack to the middle.

It went from bad to worse as the runs dried up and the remaining wickets tumbled in a heap. Cusack was the only one to show some spine, ending unbeaten on 36 from 56 balls as his side were bowled out for 131 in the final over. He thus won the man-of-the-match award on debut, the second Irishman to achieve the feat after Eoin Morgan.

Less than two months after his promising ODI debut, Cusack made an impact on his first-class debut as well. Defending champions Ireland were playing Scotland in their first match of the fourth edition of the ICC Intercontinental Cup.

In a rain-affected game, Ireland had Scotland on the mat at 135/6 after the visitors elected to bat, before a doughty 93 from John Blain, aided by the lower order, stretched the total to 314. The Scot pacemen then reduced Ireland to 59/4 before Niall O’Brien (84) and Andre Botha added 122. Cusack walked out at 181/5, joining Botha in the middle.

Botha and Cusack blunted the Scot attack en route to a record partnership of 234. This remains the highest sixth-wicket stand in the Intercontinental Cup and the third-highest for Ireland for any wicket.

Botha struck 186 off 238 balls while Cusack made 130 from 204 balls, hitting 16 fours and two sixes before being caught behind. Ireland reached 473/7 before the match was drawn. This remains his only century across all formats of cricket.

Ireland faced the mercurial Afghans in the fourth match of the 2010 ICC World Cricket League Division One. After deciding to bat, they were reduced to 27/3 which included the dismissal of Cusack – who batted one-drop – for just two runs.

However Andrew Poynter (78) turned around his team’s fortunes and spearheaded the eventual total to a respectable 237/9. Rain during the innings break meant that Afghanistan began their reply the next day. Cusack nipped out Noor Ali Zadran and Mohammed Shahzad early to reduce the score to 34/2.

The Afghans appeared to be recovering well when placed at 114/4 in the 31st over, but Cusack dented the chase by dismissing Asghar Stanikzai, the game now well in Ireland’s grasp. As the final ten overs began with 76 needed, Samiullah Shenwari became Cusack’s fourth victim.

Off the first ball of the 48th over, Cusack sealed the deal by taking his fifth wicket in the form of Hamid Hassan. Ireland won by 39 runs and went on to win the tournament, remaining unbeaten in six matches. Cusack’s figures of 8.1-1-20-5 remained his career-best in ODIs and his only five-wicket haul in international cricket.

Much has been written about Ireland’s epic three-wicket win against England at the 2011 World Cup, but Cusack’s role in the victory often goes unnoticed. Batting first, England piled up a massive 327/8 to begin the second half as clear favourites. Cusack returned unimpressive figures of 0/39 off four overs.

In reply, Ireland lost three for nine in a middle-order wobble to fall to 111/5 in the 25th over, the match as good as dead and buried. Out came Cusack at this point, to join Kevin O’Brien. O’Brien went on to launch one of the most stunning onslaughts ever seen, as he tonked a 50-ball hundred – the fastest in World Cup history. 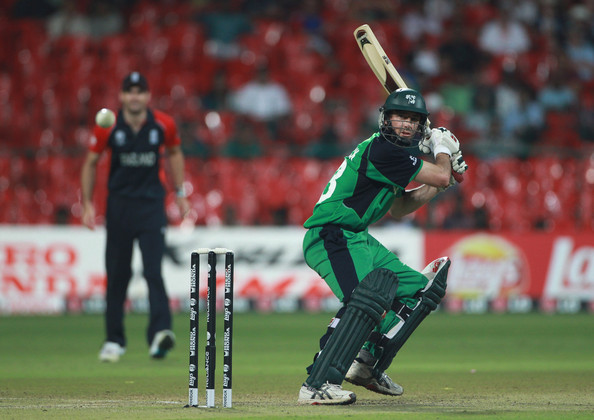 Cusack scored a priceless 47 and shared a 162-run stand for the sixth wicket with Kevin O’Brien against England at the 2011 World Cup (source – cricketireland.ie)

While O’Brien (113 off 63 balls) was going hammer and tongs, Cusack maintained a calm presence at the other end. Without his determined support, O’Brien’s exploits would have most certainly gone waste. The two shared a game-changing stand of 162 for the sixth wicket before Cusack was unfortunately run out for 47 off 58 balls.

Besides hitting three fours and a six, he farmed the strike superbly and took due responsiblity when needed. 46 balls after he got out, Ireland had created history and Cusack had earned his place in World Cup folklore with an immensely crucial contribution.

This was the second match of Ireland’s two-match T20I series in the Caribbean. In the first, they had recorded a six-wicket win – their first T20I success against a ‘top-eight’ nation. The hosts were inserted in on a low and slow Sabina Park pitch.

Openers Devon Smith and Andre Fletcher began well by putting on 27 in four overs before Cusack had the latter caught behind off his very first ball, his first over being a wicket maiden. He followed it up by removing Smith in his next over and now had figures of 2-1-2-2.

The quick blows softened the Windies and stymied their run rate. The bowlers bowled tightly as a unit as no batsman even reached 20. Cusack came back in the 18th over for his second spell and duly dismissed Denesh Ramdin and Samuel Badree to finish with a career-best 4/11. The West Indies were limited to 96/9.

However, the Irish batsmen failed to match up to their bowling counterparts and were completely choked by the home bowlers. The score slid to 29/5 in the 11th over and never recovered from the woeful start. Ireland could manage only 85/8 and had to share the series. Cusack was named the man of the series for his six wickets.

Four years after the Bangalore coup, Cusack played a pivotal part in another heart-stopping World Cup win for Ireland. Needing to win this match to keep their hopes of reaching the quarterfinals of the 2015 edition alive, Ireland would have probably suffered a disheartening defeat had it not been for Cusack’s excellent bowling under pressure.

Calculated batting from Ed Joyce (112) and Andy Balbirnie (97) guided Ireland to a big total of 331/7 after being put in. However Ireland’s ordinary bowling form – they had conceded 411 to South Africa in their previous game – meant that the game was by no means over.

Cusack produced a match-winning return of 4/32 against Zimbabwe at Hobart in the 2015 World Cup (source – rooney quinn/gettyimages/zimbio.com)

Zimbabwe stuttered to 32/2, with Cusack claiming the second wicket, that of Chamu Chibhabha. The score further fell to 74/4 by the 17th over, but Zimbabwean captain Brendan Taylor and Sean Williams forged an attacking partnership. They put on 149 for the fifth wicket before Cusack induced Taylor (121) into a catch to mid-on. His figures were 7-2-17-2 at this stage.

Williams (96) meanwhile continued Zimbabwe’s charge and the game was seeming to slip away from Ireland. Cusack’s next two overs together went for 14 runs. With 26 required off two overs and two wickets in hand, Kevin O’Brien went for 19 runs. Not surprisingly, Cusack was entrusted to bowl the final over.

Off the very first delivery, he produced an off-cutter to bowl Regis Chakabva. A single followed, which brought Tawanda Mupariwa on strike for the third ball. Mupariwa, who had crashed 18 off just five balls, went for glory but could not get the slower ball past William Porterfield at long-on.

Zimbabwe thus fell short by just five runs. Cusack turned out to be the difference, finishing with analysis of 9.3-2-32-4, all his wickets coming at key moments. Even though Ireland eventually missed out a quarterfinal berth, Cusack ended as their best bowler with seven wickets at an average of 24.57 and an economy rate of 4.58.

Wishing him a happy post-retirement life.