Australia are set to play their seventh World Cup semifinal when they take on India at the Sydney Cricket Ground on Thursday. The winner of this much-awaited encounter will face New Zealand in the grand final at Melbourne.

The Australians have contested six semifinals till date, and not once have they finished on the losing side. The closest they have come to a World Cup semifinal defeat was in 1999, when they sneaked out a famous tie against South Africa to go through. With five wins and a tie, they remain the only team yet to lose a semifinal in the premier limited-overs tournament.

The semifinal is arguably the toughest game to play in any tournament, and over the years Australia have been fortunate to have players who soaked in the pressure and revelled performing on the big stage.

Here is a look at the men who delivered when it mattered most and who are responsible for Australia’s impressive semifinal record:-

The left-arm fast bowler Gary Gilmour was brought in for the semifinal against hosts England at Headingley after being overlooked in the group stage. On a green and damp wicket, he produced a memorable spell of seam and swing bowling to dash English hopes of making to the final.

Australian captain Ian Chappell had no hesitation in putting England to bat, and it was not long before Gilmour set the tone. He began by trapping the dangerous Dennis Amiss plumb in front and followed it by castling Barry Wood with a yorker. The score read 11/2 and this was just the beginning.

Tony Greig became Gilmour’s third victim as he perished to a brilliant catch by Rodney Marsh behind the wicket. Frank Hayes, Keith Fletcher and Alan Knott too did not last long, all of them getting out LBW. England were reeling at 36/6 with Gilmour bagging all six wickets and none of the batsmen entering double figures. His outstanding analysis of 12-6-14-6 was a new ODI record. 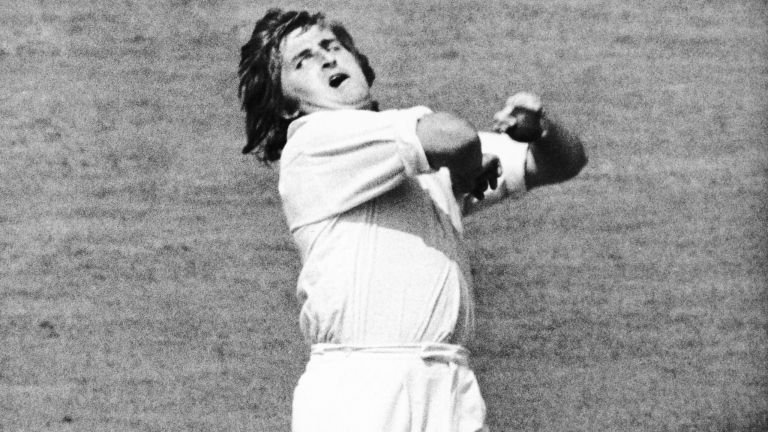 England marginally recovered to reach a total of 93, but the conditions were still heavily in favour of the bowlers. The English pacemen showed that they were no less effective and destroyed the Australian top order, leaving the score at a worrisome 39/6.

Remarkably, Gilmour was not done yet. He came out at the fall of the sixth wicket and duly smashed an unbeaten 28 at a run a ball, including five boundaries, to steer Australia to victory. He shared an unbroken 55-run stand with Doug Walters to ensure that there was no further embarrassment. His performance remains one of the best all-round displays in the World Cup.

Allan Border’s Australians faced a challenging semifinal against Pakistan at Lahore in 1987. After electing to bat, the top order collectively produced a solid effort with David Boon top-scoring with 65. At the start of the 50th over, the score was 249/8 – not exactly threatening – and a final push was much needed.

Steve Waugh was on strike, and the left-arm pace of an off-colour Saleem Jaffar provided him with the perfect opportunity of finishing the innings with a flourish. He started off with a six to put pressure on the bowler. He then followed it with 4,2,2,0 and 4 to end up with 32* from 28 balls. This last over fetched 18 runs – which was exactly Australia’s victory margin.

Twelve years later, Waugh was captaining Australia and after an indifferent start to the tournament, he managed to squeeze his side into the semifinals with an unbeaten 120 in the must-win final match of the Super Six round against South Africa at Headingley. South Africa were Australia’s opponents in the semifinal as well, and Waugh again played a significant role.

The South African fast bowlers had Australia on the mat at 68/4, at which stage Waugh was joined by Michael Bevan. The two ice-cool batsmen combined for a confidence-boosting fifth-wicket stand of 90. Waugh scored 56 from 76 balls, which proved to be invaluable. Of course, his astute captaincy too contributed to South Africa’s downfall.

Pakistan were set 268 to win the semifinal in front of their home crowd in Lahore, but an in-form Craig McDermott shattered their dream. The 22-year-old fast bowler removed opener Manzoor Akhtar early, castling him to leave the score at 37/2.

Then at 177/4, Javed Miandad and Wasim Akram were threatening to put Pakistan in charge when McDermott produced another great delivery to uproot Akram’s woodwork. This proved to be a crucial breakthrough for Australia as the Pakistani lower order and tail now faced a daunting task.

With the score reading 236/7, Pakistan still had an outside chance of pulling it off. However, McDermott returned to grab the final three wickets, those of Saleem Yousuf, Saleem Jaffar and Tauseef Ahmed – all caught behind by Greg Dyer – to ensure an 18-run win for his side with an over left. He took 5/44, the only five-wicket haul of the tournament.

Michael Bevan, one of Australia’s finest limited-overs players, had a big role to play in two successive World Cup semifinals. Firstly, in 1996, he came out to bat with the score reading a miserable 15/4 against a rampant West Indies pace attack at Mohali.

With his team in dire straits, Bevan along with Stuart Law (72 from 105 balls) proceeded to add a game-changing 138 runs in 32 overs for the fifth wicket. When he was dismissed for a courageous 69 from 110 balls, the score was 171 and at least it ensured a semblance of respectability to the innings. As it happened, Australia’s modest 207/8 was just enough for them to enter the final.

Then in 1999, Bevan put his hand up again in a very similar situation. He came out to bat at a perilious 68/4 in the epic encounter against South Africa at Edgbaston and with captain Steve Waugh (56) for company, set about rebuilding the innings in his typical style.

His partnership with Waugh realised 90, but following that, Australia lost two quick wickets to be 158/6. Bevan, a master at batting with the lower order, dominated a 49-run seventh-wicket stand with Shane Warne. The remaining four wickets however fell for six runs, with Bevan the last man to fall for 65 from 101 balls with six fours, the highest score of the match.

Just like Bevan, leg-spin wizard Shane Warne was a major catalyst in Australia’s semifinal successes in 1996 and 1999. On both occasions, he was named the man of the match for turning around his team’s fortunes with some magical bowling.

In 1996 against the West Indies at Mohali, Australia had recovered from a disastrous start to post a total of 207/8. Warne struck early in the chase, catching Courtney Browne off his own bowling to make the score 25/1. However, Browne’s fellow opener Shivnarine Chanderpaul (80) was batting resolutely at the end, and he shared a 68-run second-wicket stand of 68 with Brian Lara.

Chanderpaul and Richie Richardson then added a further 72 for the third wicket, and the West Indians appeared to be cruising to victory. Glenn McGrath provided the opening by removing Chanderpaul and Roger Harper in quick succession, thus setting the stage for Warne.

Warne duly dismissed Ottis Gibson (caught behind), Jimmy Adams and Ian Bishop (both LBW) in a stunning spell from which the Windies could not recover. They were bowled out for 202 in the final over, with Warne recording figures of 4/36. 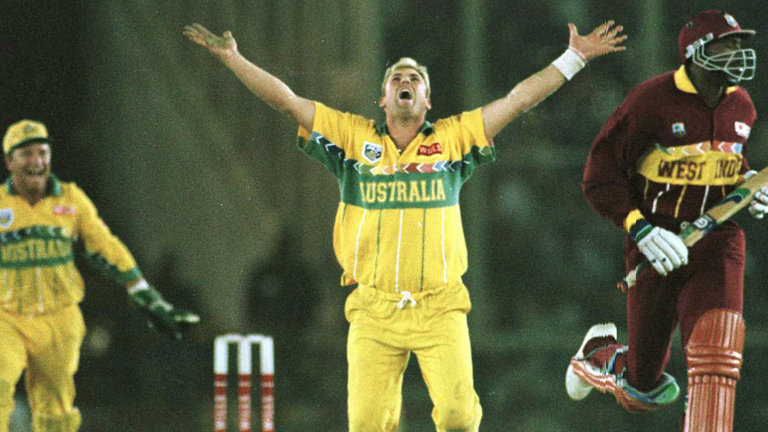 Shane Warne celebrates a wicket in the 1996 semifinal, in which he took 4/36. He followed it up with 4/29 in the 1999 semifinal (source – skysports.com/gettyimages)

He came up with an even better performance in the 1999 semifinal against South Africa at Edgbaston. Chasing Australia’s 213, South African openers Gary Kirsten and Herschelle Gibbs provided a sound start by adding 48 in 12 overs. Warne struck in his second over, bowling Gibbs with a drifting delivery that left the batsman bewildered.

He repeated the dose to Kirsten, who attempted to sweep the first ball of his third over which ended up clipping his off-stump. Two balls later, he had captain Hansie Cronje caught at slip by Mark Waugh. South Africa were now 53/3, and Warne had three wickets in just eight balls. His figures read 3-2-3-3 at this juncture and went on to bowl eight overs on the trot in his first spell.

South Africa rebuilt well through Jacques Kallis. When Warne began his final over, South Africa were 161/5 and needed 53 to win from 36 balls. Off the fifth ball, he got rid of Kallis (53) with a flighted delivery which was played to Steve Waugh in the covers. He finished with figures of 10-4-29-4, which went a long way in the match ending in a thrilling tie.

Andrew Symonds played the most important innings of his ODI career in the 2003 semifinal against Sri Lanka at Port Elizabeth. Australia had been unbeaten throughout the tournament, but found themselves in some trouble at 51/3 after electing to bat first in this crucial match.

The star trio of Adam Gilchrist, Matthew Hayden and Ricky Ponting were all back in the pavillion and the Sri Lankans had their tails up. Symonds came out to bat at number five, and along with Darren Lehmann, put the innings on back on track. The pair added a measured 93 for the fourth wicket before Lehmann (36) was dismissed.

Symonds reached his fifty from 69 balls  with a boundary off Sanath Jayasuriya in the 33rd over. Besides him, no other batsman showed the necessary application on a difficult wicket.

He battled on and remained till the end, scoring an unbeaten 91 from 118 balls with seven fours and a six. Thanks to him, Australia’s final total of 212/7 proved to be a tricky one for Sri Lanka, who went down by 48 runs on the D/L method.

David Boon and Mark Veletta (1987) – Boon scored 65 from 91 balls while Veletta scored 48 from 50 balls to pave the way for Australia’s strong total.

Stuart Law (1996) – scored a valiant 72 from 105 balls under tremendous pressure to help bail his side out from a precarious position.

Damien Fleming (1996 and 1999) – bowled the final over of both the matches in unbelievably tense situations.