The Sydney Test is one of the most awaited fixtures in the international cricket calendar. In the 2011-12 season, the Sydney Cricket Ground became only the third venue to stage a hundred Test matches.

Since its first Test in 1881-82, the SCG has seen many glorious days enriched with indelible performances. The Sydney Test, which is now fixed as the first Test in Australia every new year, has always connected with cricket lovers. From the days of the legendary barracker Yabba to the present Jane McGrath Foundation ‘Pink Test’, this historic ground has indeed been one of the greatest institutions of the game.

On the eve of the fourth Test between Australia and India, let us look back at five of the best Test matches played at the SCG over the years, in chronological order:-

This was a low-scoring Ashes thriller from the bygone era. England, who were holding the urn, had cruised to victory in the two opening Tests, which meant that this was a must-win game for the hosts.

Australian skipper Hugh Massie elected to bat first, but at the end a storm-affected first day, his side had slumped to 97/8. Tom Garrett, batting at number ten, revived the innings the following day with a knock of 51. He added 80 for the last wicket with Edwin Evans as the score reached 181. Wilf Flowers (5/46) and William Attewell (4/53) led the bowling for England.

Australia then seized the advantage as Tom Horan (6/40) and Frederick Spofforth (4/54) combined to bowl out England for 133. After a sound start by the openers, who put on 31, England’s innings nosedived to a score of 56/5, from which they could not recover. No batsman managed more than 24. In Australia’s second innings, it was Billy Bates’ off-breaks that helped England stay alive in the game. He took 5/24 as the hosts went from 91/2 to 165 all out.

Needing 214, England ended the third day at 29/2. Captain Arthur Shrewsbury was looking in good touch on the fourth day, but Spofforth was getting into his element. At 92/6, England were in deep trouble. Flowers (56) and Maurice Read (56) added 102 for the seventh wicket to put a twist in the contest. It was Spofforth (6/90) who rose to the occasion – he castled Read and then with seven runs required and one wicket left, dismissed Flowers, caught at point. Australia won by six runs to stay alive in the series.

England, under Andrew Stoddart, became the first team to win a Test after following on with a thrilling ten-run victory in the opening game of the 1894-95 Ashes. 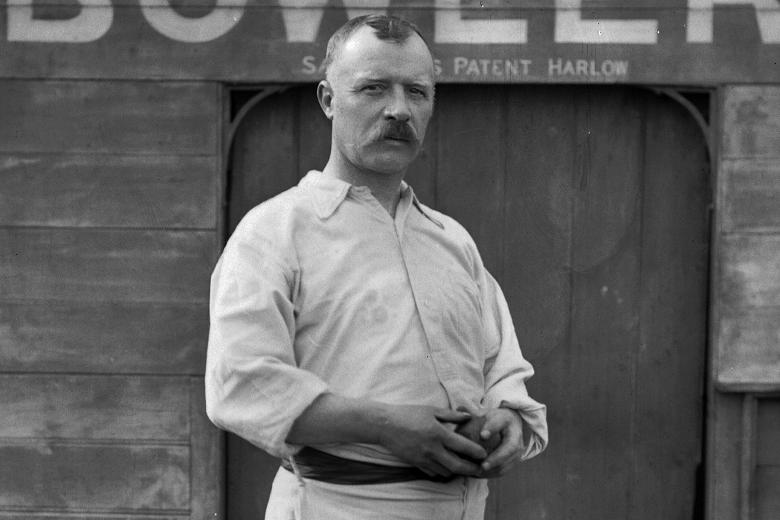 Slow left-arm bowler Bobby Peel was England’s hero in the opening Test of the 1894-95 at the SCG (source – thetimes.co.uk)

Australia piled up 586 after electing to bat, recovering from a triple strike by Tom Richardson (5/181) which left them tottering at 21/3. George Giffen (161) and Frank Iredale (81) put on 171 for the fourth wicket. Giffen added a further 139 for the fifth wicket with Syd Gregory, who went on to make 201. Gregory, along with Jack Blackham (74) boosted the total with a 154-run stand for the ninth wicket.

England’s reply was built around Albert Ward’s 75, before Johnny Briggs’ rearguard 57 lifted the score from 211/7 to 325. Giffen took 4/75. With a lead of 261, home captain Blackham enforced the follow-on. England did better the second time, Ward top-scoring again with 117 – he added 102 with Jack Brown (53) for the third wicket. The lower order performed again, as England went from 296/6 to 437, setting Australia a target of 177. At the start of the final day’s play, Australia looked comfortable at 113/2.

During the night it rained and it was followed by sunshine the next morning, thus turning the pitch into a ‘sticky’. The slow left-arm orthodox bowler Bobby Peel came into his own, and so did Briggs, another slow-left-armer. The duo began to make serious inroads in the Australian line-up. The Australian nerves tightened, and England had their tails up. From 130/2, Australia were dismissed for 166 – losing the Test by ten runs. Peel took 6/67 while Briggs collected 3/25. Australia’s 586 remains the highest losing total in Tests till date.

England came into this Test on the back of a crushing innings defeat at Brisbane. They needed something special to retain the urn they famously won in 1953, and that special spark was provided by Frank ‘Typhoon’ Tyson.

Put in to bat by Arthur Morris, England folded for just 154 with no batsman crossing 35. Tyson (4/45) and Trevor Bailey (4/59) ensured that Australia’s first-innings total was limited to 228, with Ron Archer top-scoring with 49.

In the second dig, England slumped to 55/3, but Peter May proceeded to play an excellent innings. He stroked 104 and added 116 for the fourth wicket with Colin Cowdrey (54). England eventually reached 296. During the innings, Tyson was hit by a Ray Lindwall bouncer, and few expected him to play again in the match.

However, not only did Tyson return to the field, but he also went on to demolish the Australian second innings and change the course of the series. The target was a manageable 223, but save for Neil Harvey, who scored an unbeaten 92 from number four, no batsman offered resistance. Tyson took 6/85 (10/130 in the match) and with Brian Statham for support, reduced Australia from 77/2 to 136/8 and finally to 184 all out. This 38-run win rejuvenated England and they cruised to a 3-1 series victory.

This was the final Test of Pakistan’s first proper series in Australia – they had earlier played just a one-off Test in 1964-65. Coming into this game, Australia had already sealed the series by winning the first two Tests.

On a greenish wicket, visiting captain Intikhab Alam elected to field. Australia’s top order laid a strong foundation and guided the score to a healthy 315/5. However, they lost their last five wickets for just 19 and folded for 334. Ian Redpath top-scored with 79 while Ross Edwards made 69. Sarfraz Nawaz picked up 4/53.

In reply, Pakistan slipped to 131/4 before Mushtaq Mohammed (121) and Asif Iqbal (65) added 139 for the fifth wicket. The visitors took a narrow lead by ending up at 360. Greg Chappell took 5/61, the only five-wicket haul of his Test career. 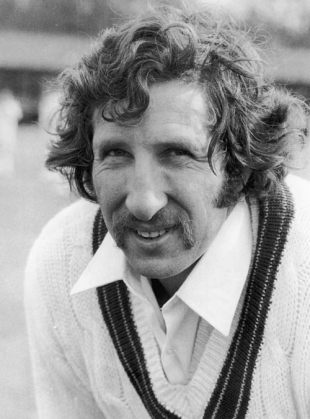 Max Walker destroyed Pakistan’s batting with a return of 6/15 to set up Australia’s 52-run win at the SCG in 1972-73 (source – espncricinfo.com)

Pakistan’s pace duo of Nawaz (4/56) and Saleem Altaf (4/60) then rattled the Australian batting in the second innings, as the hosts crashed to 44/4 and further to 94/7 with two days still left. John Watkins and Bob Massie attempted a recovery by putting on a crucial stand of 83 for the ninth wicket, which helped the score swell to 184. Pakistan’s target was 159 with ample time left, and were well poised to record their maiden Test win in Australia.

But the moderate target proved to be tricky for the visiting batsmen, who failed to cope up with the pace of Dennis Lillee and Max Walker. When Zaheer Abbas fell for 47, the score was 83/4 and the game was even. But Walker produced a remarkable spell of swing bowling as he grabbed the last five wickets for three runs in 30 balls. He finished with 6/15 as Pakistan lost their last five for 13 to be bowled out for 106.

This was South Africa’s first Test series in Australia since readmission, with the first Test at Melbourne ending in a rain-affected draw. The visiting captain Kepler Wessels called correctly and decided to bat.

Shane Warne produced a mesmerising spell on the first day itself, taking 7/56. South Africa had lost opener Andrew Hudson for a duck early on, but Gary Kirsten (67) and Hansie Cronje put on 90 for the second wicket. At 110/2, Warne bowled Daryll Cullinan to put the innings into panic mode. The great leg-spinner cut through the middle order and South Africa were bowled out for 169, losing their last nine wickets for just 78.

Australia slipped to 75/3 on the second day, but opener Michael Slater scored an obdurate 92, adding 104 with captain Allan Border for the fourth wicket. The hosts scored 292, with Allan Donald and Fanie de Villiers taking four wickets apiece. South Africa’s second innings seemed to be following the pattern of the first, as they went from 75/1 to 110/5. But Jonty Rhodes scored a gutsy, unbeaten 76 from number six to guide the total to 239. Warne collected another five (5/72) to give himself 12/128 in the match.

Australia needed only 117 to win, and began their innings in the last session of the fourth day. De Villiers bowled a hostile spell to reduce the score to 63/4 at stumps, mopping off the top four as Australia fell to 56/4 from 51/1. On the final day, Donald too joined the party as Australia were left reeling at a dismal 75/8.

Damien Martyn and Craig Dermott, who top-scored with a counter-attacking, unbeaten 29 from number ten, added 35 for the ninth wicket. Donald removed Martyn to make it 110/9, before last man Glenn McGrath offered a return catch to De Villiers (6/43) to leave South Africa jubilant victors by a mere five runs.