In the third part of this series, we shall revisit the career of one of the top Parsi all-rounders to have graced the game before India attained Test status.

Born in Bombay on January 13, 1885, Jehangir Sorabji Warden was a slow left-arm orthodox bowler and a useful left-handed batsman who played 41 first-class matches in a career spanning from 1905 to 1925. He made his debut for the Parsis against the Europeans in the 1905-06 Presidency match played in Poona, and immediately made an impact. Facing a huge first-innings total of 503, the Europeans were all out for just 137, thanks to Warden who destroyed the middle-order with figures of 5/45. He further went on to take 4/50 in the second innings, enabling the Parsis to win by a crushing margin of an innings and 226 runs. The 20 year-old debutant caught the attention of all with his match return of 9/95.

In the 1907-08 Bombay Triangular final at the Bombay Gymkhana, Warden recorded sensational figures of 6/11 in just four overs as the Europeans were dismissed for a paltry 63 in pursuit of a stiff target of 207. Then less than a month later, he was again the scourge of the Europeans in the Presidency match at Poona – he picked 8/93 in the match (3/38 and 5/55) to bowl the Parsis to victory by an innings and 23 runs. Having started his career primarily as a bowler, Warden began to pay attention to his batting as well during this period by playing in the middle-order and at times, opening the innings.

His impressive bowling performances earned him a spot in the All-India team for the historic tour of England in 1911. In his first innings on English soil, he made a valiant 33 from number eight against Oxford University. In a drawn game against Scotland, he took 7/94 after opening the bowling. Then against Sussex, he took 5/74 in the second innings to give the Indians a chance of a rare win. However, the Indian batsmen failed to chase the target of 170 and Sussex won by a narrow margin of ten runs. In the final first-class match of the tour against Gloucestershire played at Bristol, Warden recorded his best ever figures in an innings – 8/91 – in a match that was drawn. 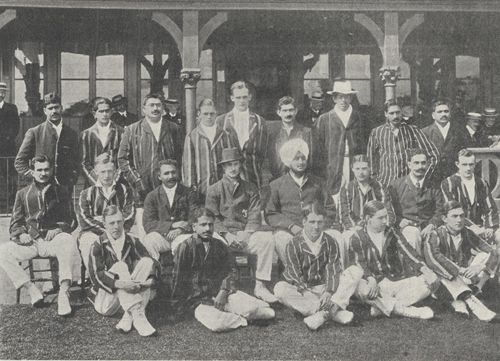 Members of the all-India team on the 1911 tour of England. Warden is the standing bespectacled man wearing a hat (source – inloughborough.com)

On that 1911 tour, Warden displayed his batting abilities as well, albeit in a match without first-class status. Against minor county Northumberland, Warden struck a fluent 116 from number five in the first innings. In the same game, he recorded match figures of 11/173 (3/85 and 8/88). However, his eight-wicket haul in the second innings was not enough as the Indians, defending 158 runs, endured a heart-breaking one-wicket defeat. Against Durham, another minor county, he did have the satisfaction of finishing on the winning side. At the start of the second innings, the Indians were trailing by five runs, but Warden took 5/42 to help bowl out the opposition for 87 and eventually secure an eight-wicket win for his team. In 14 first-class matches on the tour, Warden scored 429 runs and took 44 wickets.

In the 1911-12 Triangular final at the Bombay Gymkhana, Warden again showed his penchant for the big occasion. In their two innings, the Europeans could muster just 104 and 85 respectively as they were completely dominated by the guile of Warden. He took 6/51 and 6/45 to play a major role in the Parsis’ eight-wicket win. His best showing as a batsman came in the 1912-13 Bombay Quadrangular match against the Hindus. Out of a total of 183, he scored a career-best unbeaten 115 – the only score above 30 in a match which the Parsis won by an innings and 40 runs.

In 1915-16, he was part of an Indian XI which took on an England XI – captained by Lord Willingdon – at the Bombay Gymkhana. Even though the home team went down by a massive innings and 263 runs, Warden was the best bowler for his side with figures of 4/156. Another amazing bowling performance came against the Muslims in the 1916-17 Bombay Quadrangular, when he took 12/90 (7/37 and 5/53) to guide the Parsis to a 156-run win.

After a hiatus of five years from the first-class scene, Warden returned for the 1921-22 Bombay Quadrangular. In his very first match upon his comeback, he collected 12/106 (5/62 and 7/44) against the Muslims. Then needing 169 to win, the Parsis were in trouble at 88/5 when Warden came out to bat. He used all his experience to score an unbeaten 43 which secured an exciting two-wicket win for his team.

After this, he played only two more first-class matches in his career, the last of which was against the Muslims in 1924-25. In 1922, he achieved the rare feat of taking ten wickets in an innings while representing the Parsi Cricket Club in a club-level game against Mohun Bagan Cricket Club. In another club game in 1920, he took five wickets off the first five balls of the match while playing for Jorah Bajan against Customs at Calcutta.

In his two decade-long first-class career, Warden played 41 matches in which he scored 1208 runs from 71 innings at an average of 18.87 with one century; and more importantly, took 183 wickets – including 17 five-wicket innings hauls and four ten-wicket match hauls – at an average of 15.87. Later, he became an umpire – he even stood in a first-class game in Colombo in 1925-26 – and also authored a popular book named ‘Knotty Cricket Problems Solved’.