As mentioned in a previous post, a total of thirteen Parsis (eleven men and two women) played international cricket for India. A total of sixteen centuries and four five-wicket hauls in Tests and one ODI half-century (the golden age of Parsi cricket had passed when one-dayers were introduced) have been recorded. Let us look at some of the best performances by Parsis in international cricket:-

This was the West Indies’ first visit to India and they were no doubt a very strong side. In the second Test at the Brabourne Stadium in Bombay, the visitors piled up a huge score of 629/6 with the great Everton Weekes smashing 194. In reply, India were all out for 273 and made to follow on. With his team staring at defeat, Rusi Modi stood up and made a resistant 112, sharing a century stand with Vijay Hazare and taking India safely to a draw. This was the first century by a Parsi cricketer in international cricket.

Polly Umrigar was one of the best all-rounders of his time and the greatest Parsi cricketer to play for India – a total of twelve Test hundreds justifies that. In 1951-52, he starred in India’s very first Test victory after a wait of two decades – against England at Madras. Needing a win to draw the series, India made a solid 457/9 in reply to England’s 266 in the first innings. Umrigar came in to bat when the score was 216/5, and he guided India to a strong position with his century – his first in Test cricket. India won by an innings and 8 runs, sparking delight amongst the crowd.

This was the first ever double century scored by an Indian in Test cricket. The venue was Hyderabad. Umrigar batted for nearly eight and a half hours to score his record-breaking 223. He shared a double-century partnership with Vijay Manjrekar for the third wicket as India piled up 498/4. However New Zealand resisted the Indian bowlers on the final day and the match ended in a draw. Umrigar’s effort set the tone for a slew of big scores in the series by Indian batsmen.

Umrigar reserved his best all-round performance on the 1961-62 tour of the West Indies, a country where he always played well and delighted the crowds. The series was yet another forgettable one for India – they lost all five Tests – but Umrigar was the positive aspect for India. In the fourth Test at Port-of-Spain, he first took 5/107 in West Indies’ first innings, and then with India following-on, smashed an unbeaten 172, one of the greatest innings to be played by a visiting batsman in the Caribbean. Umrigar’s superb efforts were not enough as India went down by 7 wickets. 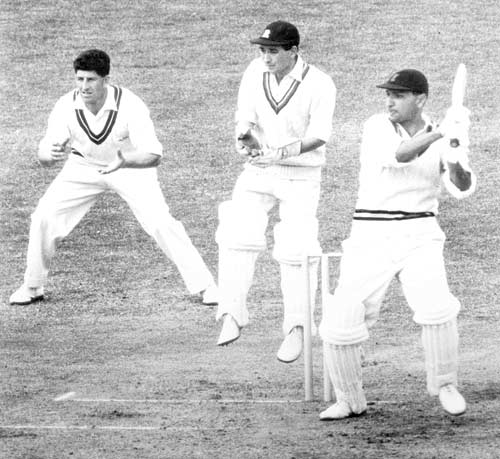 The scores may not look substantial, but mere numbers cannot gauge the importance of these innings. India recorded their first ever Test win (and eventually, the series win) in England at the Oval in 1971, and India’s wicket-keeper Farokh Engineer had a crucial role to play. Replying to England’s 355, India were in trouble at 125/5 when Engineer walked in. He Went on to make a valuable 59 under pressure, and helped India to 284. Then in the second innings, with India in a tricky chase of 173, Engineer ensured there were no further hiccups; he was at the crease on an uneaten 28 when the historic four-wicket victory was sealed.

Engineer was not only the only Parsi man to appear in an ODI for India, but also the first Indian to win a man of the match award in an ODI. In the inaugural cricket World Cup in 1975, India recorded their first ever ODI success – a ten-wicket win against East Africa at Leeds – and Engineer was named man of the match for his unbeaten 54, which helped India easily chase down the target of 121 with more than thirty overs left. This was to be India’s only win in the tournament.

In the 1993 Women’s World Cup, India came very close to achieving a win against hosts England at Finchampstead. Eventually, they lost by just three runs, but India’s captain Diana Edulji bowled brilliantly after putting England in to bat. She picked up four wickets for just 12 runs in 11.5 overs to help restrict England to 179 all out. But her team’s batting let her down as India were bowled out for 176 with one ball left.

2 thoughts on “SPECIALS – Top performances by Parsis for India”