This Test played at the Queens Sports Club from 18th to 22nd December, 1996 was the first ever between England, the oldest cricketing nation and Zimbabwe, the then newest member of the Test fraternity.

Zimbabwe had made their Test debut in 1992-93 and in the four years since, the African nation had been impressive, managing drawn series against Sri Lanka and New Zealand and a maiden Test match win over Pakistan in 1994-95.

England were coming off a mixed home season, having beaten India but losing to Pakistan. They were then the only full member whom Zimbabwe had beaten twice in ODI cricket – at Albury in the 1992 World Cup and at Sydney in 1994-95. As was to transpire, the hosts blanked England 3-0 in the ODI leg of the tour after the Tests.

Alastair Campbell called correctly and understandably decided to bat on a pitch without much life in it. Stuart Carlisle was dismissed for a duck early on by Darren Gough, but Grant Flower and Campbell showed no sign of nerves as they rattled along at three-and-a-half runs an over.

Shortly after lunch, Flower was out for 43 to debutant Chris Silverwood after having shared a stand of 127 with his captain, who followed soon after for a well-made 84. 39-year-old Dave Houghton then combined with wicketkeeper Andy Flower for a 70 run fourth-wicket partnership before three quick wickets ensured the day ended in balance, the score reading 256/6 with Flower on 58*.

The lower order rallied around Flower on the second day, especially Paul Strang, who along with the keeper frustrated England with a 79-run stand for the seventh wicket. The innings finally ended at 376 with Flower making 112 – his third Test hundred.

On the third day, Zimbabwe never let England gain control despite NIck Knight’s 56 and a third-wicket partnership between Alec Stewart and Nasser Hussain which fetched 68 runs. At 180/4 – three of the four wickets falling to Strang – another wicket would have given Zimbabwe the command.

At that stage however, John Crawley joined Hussain and the duo allayed all apprehensions by guiding the visitors to a healthy 306/4 at the close of play, with Hussain on 101* – his third Test hundred – and Crawley on 51*.

Hussain and Crawley stretched their fifth-wicket partnership to a most valuable 148 on the fourth day, before Heath Streak accounted for Hussain (113). Though no more substantial number of runs were added, Crawley managed to get his second Test century, staying on till the end until he was last out for 112 to give Strang (5/123) his fifth wicket.

England’s total was 406, the lead being only 30. Their fast bowlers then struck early to remove both openers, the score reading 6/2. The spinners Croft and Phil Tufnell then came into play, and they did not allow any batsman to settle down. Zimbabwe finished the day at 107/5, ahead by just 77.

It further became 111/6 as the final day began, but current Zimbabwe coach Andy Waller – making his debut aged 37 – stood up to the task. He found a willing ally in Guy Whittall and the two put on 67 for the seventh wicket. Waller was out for 50 while Whittall made 56, helping his team to score of 234.

Tufnell was the pick of the bowlers with 4/61. The hosts had been successful in not allowing England a quick finish on the final day, and the equation for the visitors was now a challenging target of 205 in a minimum of 37 overs, which meant they had to chase at more than 5.5 runs per over in order to win.

Even though Atherton was castled by Henry Olonga to make the score 17/1, Knight and Stewart made their intentions clear. At the tea break, England were 36/1 in only five overs, which surely suggested that victory was what they were looking for. Post tea, Knight and Stewart continued the onslaught as Zimbabwe were running out of ideas.

The hosts then went into an ultra-defensive mode and began to bowl wide down the leg side. Yet, as the final 15 overs started, England needed 87 more with nine wickets intact. With 51 to win off eight overs, Stewart (73 from just 76 balls) fell victim to Strang following a miscued pull shot. Two balls later, Hussain got out for zero. 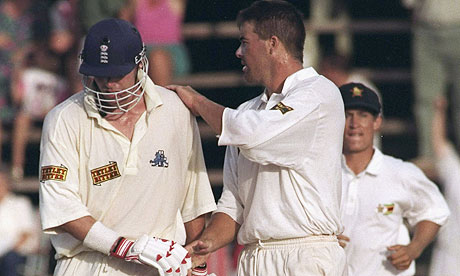 England gunned for the target despite Zimbabwe’s increasingly negative tactics, but wickets began to fall. Crawley and Graham Thorpe came and went, with the total now 182/5. The final two overs asked for 21 more runs from England. Knight was still there, and along with Gough, eight runs were managed off the penultimate over.

The final over remained, 13 runs still required. Streak was given the ball and Knight was on strike. Streak started off with a dot ball before Knight scampered for two off the second delivery. 11 off four. The third ball resulted in a much-needed six over square leg. With five to get, Streak bowled the following ball wide down the off side.

But Ian Robinson chose not to call it wide, casting further doubts on his decision-making in the game. Two more came off the penultimate ball and now three were needed to win. All nine fielders were on the boundary edge. Knight, later named Man of the match, ran two more, but fell for 96, way short of the crease while dashing for a non-existent third run.

Exactly 37 overs were bowled, and England finished at 204/6. For the first time in Test history, a game was drawn with the scores level in the fourth innings. It has since happened once, when India and West Indies drew the Mumbai Test in 2011-12. Zimbabwe managed to hang on to a draw by the skin of their teeth.

A furious David Lloyd, England’s coach, later remarked that ‘we flippin’ murdered them’, as he firmly believed that the opposition had been thoroughly outplayed. He added that if Zimbabwe were elated at saving the Test, it was a false elation.

Interestingly, match referee Hanumant Singh fined Streak 15 per cent of his match fee for inferred criticism of the umpires – the bowler had said he was lucky not to have been called wide in that last over.

As for the series, it ended in a 0-0 result following another draw at Harare. Disappointingly, England have never since played a Test series in Zimbabwe, although they have been hosts twice – in 2000 and 2003.