Arch-rivals India and Pakistan, while playing each other, have been historically so keen to avoid defeat that Tests between the two nations have ended in dull draws more often than not. Indeed, 38 out of the 59 Tests between them have ended in stalemates. The last eleven India-Pakistan Tests preceding the fifth and final Test of the 1986-87 series at Bangalore had ended in draws.

This deciding encounter was played between March 13 and 17, 1987. To avoid a third successive 0-0 series result, Ramaswamy Mohan, the curator of the Chinaswamy Stadium, prepared a rank turner akin to a ‘minefield’. Though it did not make for high scores and easy runs, the cricket itself was thrilling and finally a result was achieved.

Pakistan captain Imran Khan won the toss and decided that his team would bat first on the unprepared turf. The ball seemed to be turning square almost immediately, and Rameez Raja decided it was best to play a few aggressive shots after his fellow opener Rizwan-uz-Zaman was cleaned up by Kapil Dev for a duck.

However it was too good to last and he too fell to Kapil. Saleem Malik (who top-scored with 33), played steadily and took the score to 60/2. But from thereon, the 21-year-old left-arm spinner Maninder Singh stole the show and induced the batsmen to panic on a pitch tailor-made for his spin.

He had Javed Miandad and Manzoor Elahi caught off his own bowling in the space of three balls, and then snared Malik and Imran to reduce the visitors to 68/6. He had taken four wickets in 13 balls and the pitch was showing its true colours. The last two wickets added 42, but the final total was 116, below-par even by the pitch standards. Maninder captured a career-best return of 7/27 in 18.2 overs.

Off-spinner Tauseef Ahmed then took the wickets of the Indian openers as India ended the first day at 68/2. Early on the second day, he also removed Mohinder Amarnath, but Dilip Vengsarkar was fast mastering the pitch. India were in control at 126/4 when Ravi Shastri edged one to Saleem Malik.

Four runs later, Vengsarkar perished too, out for 50 to hand Tauseef (5/54) his fifth wicket. The Indian innings collapsed thereafter, with left-arm spinner Iqbal Qasim (5/48) ensuring a fifer of his own. India were all out for 145, and the lead of 29 was far less than what they would have liked. The two spinners took all the wickets, between them bowling 57 out of the 64 overs.

Pakistan began their second dig with better application as the openers wiped off the deficit. They ended day two at 155/5, with Rameez scoring a crucial 47. India chipped away on day three, but were again frustrated by the tail. Wicketkeeper Saleem Yousuf, batting at nine, made an unbeaten 41 and added 51 for the ninth wicket with Tauseef – runs that were worth their weight in gold on the crumbling pitch.

The innings terminated at 249, with Shastri picking 4/69 and Maninder 3/99 to earn himself 10/126 in the match. There was ample time for India to score the required 221 runs but on a pitch like this, patience can be of little help. It was the pace of Wasim Akram that dented the chase early on as he trapped Kris Srikkanth plumb in front before having Amarnath caught behind to reduce the hosts to 15/2.

At the other end, Sunil Gavaskar was beginning to give his team-mates a lesson on how to bat on such raging turners, in what turned out to be his final Test. Tauseef took two wickets before the close, India ending the third day at a wobbly 99/4, Gavaskar (51 not out) being their only hope.

When play resumed after a rest day, young Mohammed Azharuddin was starting to provide valuable support to Gavaskar. However, when their stand had reached 43, Qasim caught and bowled Azharuddin – the score now 123/5. Again, Gavaskar found a gritty partner in Shastri and again Qasim struck at a crucial time, this time having Shastri caught and bowled to make it 155/6. 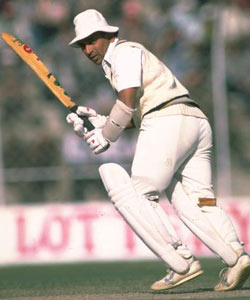 In his last Test for India, the legendary Sunil Gavaskar came up with a gem of an innings, but his 96 was not enough to prevent defeat for his team

The Indian ship was slowly sinking. Qasim further continued his dream match by bowling Kapil six runs later, the Indian captain playing an unnecessarily bold shot, and now it seemed that even Gavaskar would not be able to save the hosts. The score was 180/7 when the great man’s masterpiece came to an end as he edged one to Rizwan at slip off Qasim.

In what is rightly regarded as one of the best Test innings, Gavaskar scored 96 off 264 balls, batting for five hours and 20 minutes. Roger Binny then tried to stick around a bit, but it was too late. India were dismissed for 204, falling just 16 runs short of a famous win. Qasim (4/73) and Tauseef (4/85) starred again, giving them match-figures of 9/121 and 9/139 respectively.

In the end, Pakistan’s spinners proved more effective than the home spinners, and the final margin would have been much more had it not been for Gavaskar’s masterclass. That no one else managed more than 26 in the innings speaks of the quality of that knock under extremely tough conditions.

Gavaskar was named Man of the Match in his last Test, but sadly he found little support as Pakistan won only their third overseas series. A great career had come to an end even as many wondered why he was retiring when he could play better than anyone else in the team. For the record, Pakistan’s next tour of India came as many as 12 years later, in 1998-99.