This was South Africa’s first Test series in Australia since readmission, and the first Test, the Boxing Day Test, was a rain-affected draw. The second Test was played in the new year, from 2nd to 6th January, at Sydney, with both teams set for battle after barely getting a chance to impress at Melbourne.

South Africa were led by Bloemfontein-born Kepler Wessels, who had played 24 Tests for Australia from 1982 to 1985, and was now a part of his native country’s readmitted Test team. Wessels called correctly, and decided to bat. The first day belonged to the great Shane Warne, who bamboozled the visiting batsmen with his array of magical deliveries.

After Glenn McGrath removed Andrew Hudson for nought, South Africa seemed to be on the right track as Gary Kirsten and Hansie Cronje put on 90 for the second wicket, before Craig McDermott accounted for Cronje (41). Then the Warne show began.

The ‘Sheikh of Tweak’ started off by bowling Daryll Cullinan for nine and trapping Jonty Rhodes LBW, before having the key man Gary Kirsten stumped by Ian Healy for 67 – all to flippers – to have South Africa at 134/5. He then went on to add four more scalps as South Africa subsided to 169 in the 75th over. 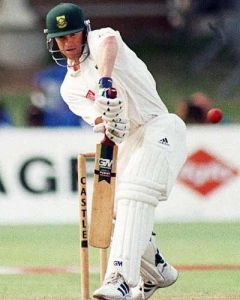 The visitors lost their last eight wickets for just 59, seven of them to Warne. Warne finished with outstanding figures of 27-8-56-7. Australia lost Mark Taylor to end the day at 20/1. South Africa began the second day well, as they scalped David Boon and Mark Waugh to reduce the home side to 75/3.

But opener Michael Slater, who made 92, was undeterred, and shared a crucial 104-run partnership for the fourth wicket with captain Allan Border (49), before both were out with the score at 179. Australia ended the day at 200/5. From thereon, on day three, Damien Martyn (59) took over, and added important runs with the lower order before being the ninth man out.

Australia eventually finished at 292, a good 123 runs ahead on a not-so-helpful wicket. Pacemen Allan Donald and Fanie De Villiers picked up 4/83 and 4/80 respectively. In the second innings, Hudson was out early again and Kirsten was dismissed for 41 – both to McDermott, as South Africa ended the third day at 94/2, 29 runs in deficit.

McDermott took his third wicket, removing Cronje, while Warne picked up the wickets of Wessels and Cullinan as South Africa slumped to 110/5 with Australia still leading by 19. Rhodes then stepped up to the challenge, and shared in a stand of 72 for the sixth wicket with Dave Richardson, and an invaluable 36 for the last wicket with Allan Donald. 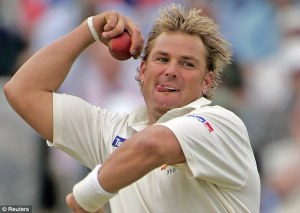 Shane Warne’s 12 wickets were not enough to prevent Australia from losing (source – telegraph.co.uk)

Rhodes remained unbeaten on a masterly 76 as South Africa managed to reach 239. Warne bowled 42 overs to claim another 5 for 72, to have a match haul of 12/128 – his career-best figures. Australia needed only 117 to win the Test, but De Villiers, playing only his second Test, spiced up the game as he rocked the Australian top-order.

De Villiers’ burst reduced the hosts to 56/4, as he mopped up the top four, including David Boon and Tim May in successive balls. Australia went into the final day at 63/4, still needing another 74 runs for victory. Donald set the tone early on day five, cleaning up Allan Border to have the Aussies in real trouble at 63/5.

During the morning Wessels injured his finger while attempting a slip catch, and hence young Cronje took over as captain. Australia’s dramatic collapse continued, as they lost Waugh leg-before to Donald while Healy was bowled by de Villiers. When Cronje ran Warne out with a direct hit from mid-off, they were down in the dumps at 75/8, having lost their last seven for just 24 runs.

Suddenly McDermott decided to become a hero, and scored a breezy, unbeaten 29 in a ninth-wicket stand of 35 with Martyn. However Martyn was out for 6, caught by Hudson at cover off Donald – he had batted for 106 minutes – leaving the score at 110/9 and the last pair to do the rest. 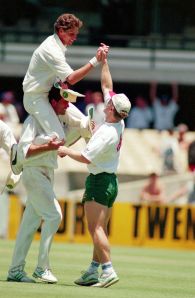 But it was too much for last man McGrath, who was out caught and bowled for 1 to de Villiers, thus handing an astonishing five-run win to South Africa. Australia batted 56.3 overs in the second innings, but still could not win, finishing at 111.

De Villiers returned a match-winning 6/43 to get 10/123 in the match and win the Man of the Match award. Donald supported well again, taking 3/34. UCBSA managing director Ali Bacher – who led his country to the 4-0 thrashing of Australia when the two teams last met in 1969-70 – called it “our finest achievement ever.”

It was South Africa’s 12th victory in 55 Tests against Australia (who had won 29), but their ninth in the last 13, a sequence dating back to South Africa’s last tour of Australia in 1963-64. Australia drew the three-Test series 1-1 with a 191-run victory at Adelaide.