Close on the heels of an insipid World Series Cup campaign in Australia in 1988-89, where they failed to reach the finals after having won only two out of eight league games, Pakistan hopped across the Tasman Sea for a full tour of New Zealand. After warming up against a National Second XI in a three-day fixture, the tourists faced their first real challenge through a 40-over List A match against Auckland.

The Auckland eleven that was assembled to take on the Pakistanis at Eden Park on January 22, 1989 bore a strong look. Led by Jeff Crowe, the hosts had the likes of John Bracewell, Dipak Patel, Ian Smith, Martin Snedden and Danny Morrison in their ranks, and were very much capable of toppling Imran Khan’s outfit. Crowe called correctly, and had no hesitation in electing to field amid seaming conditions.

Things looked ominous from the outset for the Pakistanis, as Morrison had Ramiz Raja caught behind by Smith off the fifth ball with only five runs on the board. The fast bowler made it two out of two by scalping Shoaib Mohammad off the very next delivery, and in his following over, castled Mudassar Nazar to leave the score tottering at 6/3. Saleem Malik joined the experienced Javed Miandad at this stage.

For a moment, it seemed that Miandad and Malik would put the Pakistanis on the road to recovery. However, Morrison was on a roll, and he duly took his fourth wicket by dismissing Malik with the score at 19. Miandad (who ended up top-scoring with 16) and Ijaz Ahmed put on 17 for the fifth wicket – the highest partnership of the innings – until the former was caught behind off Willie Watson to make it 36/5. 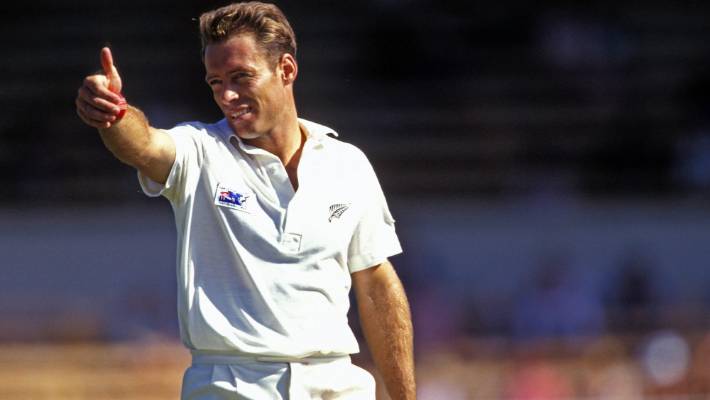 Imran walked out to the middle with half his side back in the hut inside 14 overs, but all he could do was watch as Snedden’s medium pace took over. Ijaz Ahmed became Snedden’s first victim when he was bowled with the score at 48, after having consumed 55 balls to score eight runs. Wicketkeeper Saleem Yousuf perished off the next ball, further sinking the Pakistanis into the quagmire.

Snedden’s sixth over yielded the wicket of Tauseef Ahmed, giving Smith his fourth catch. Nine balls later, without any addition to the total, Imran was run out after scoring five runs in 29 balls, as the Pakistanis stared at an embarrassing sub-50 total. The end came off the very next ball, when Snedden bowled Saleem for the innings’ fourth duck to condemn the visitors to a miserable 48 in 26.1 overs.

Snedden returned miserly figures of 4/7, while Morrison collected 4/18 from seven overs. The Pakistanis had lost their last five wickets in 21 balls without scoring a run, resulting in one of the lowest List A totals – at that time, it was the joint-lowest List A total outside the United Kingdom, equalling House Building Finance Corporation’s 48 against National Bank of Pakistan at Rawalpindi in 1985-86.

To this day, the Pakistanis’ 48 remains the lowest total in a List A match in New Zealand. Auckland lost Richard Reid to Imran in the first over, but Reid’s fellow opener Philip Horne scored 23* to steer the hosts to a seven-wicket win with 23 overs to spare. Indeed, it was a highly commendable performance from Auckland, considering the manner in which they had dominated a top international team.

The three-Test series that followed ended in a 0-0 stalemate. The first of the Tests, at Dunedin, was completely washed out, and an ODI was played in its stead, which New Zealand won by eight wickets. New Zealand also had the better of the four-match ODI series, by a margin of 3-1. Incidentally, Pakistan’s solitary success came at Eden Park, where Raja hit 101 in a chase of 251 to set up a seven-wicket win.