The first men’s Test to be played in Ireland is almost upon us, as the hosts gear up to take on Pakistan at Malahide from Friday. This momentous occasion comes a good 19 years after the first men’s ODI in Ireland, which in turn was played four years after the first women’s ODI on the Emerald Isle. The game in question was at the 1999 World Cup, and was the only one hosted by Ireland in the tournament.

The 1999 World Cup was primarily hosted by England, with a few games allotted to Scotland, Ireland, Wales and the Netherlands. Scotland had beaten Ireland in the winner-takes-all third-place playoff of the 1997 ICC Trophy in Malaysia to ensure qualification for the World Cup, and consequently, were able to play two home games in the tournament, against Bangladesh and Australia.

Thus, with Ireland missing out on a World Cup berth, the first ever men’s ODI on Irish soil was without the home team in action. Instead, the Clontarf Cricket Club Ground in Dublin, better known as Castle Avenue, played host to Bangladesh and the West Indies in the sixth Group B game of the tournament, on May 21, 1999. This was the first ODI to be played between these two teams.

Both teams were searching for their first win, having lost to New Zealand and Pakistan in their respective opening games. This was Bangladesh’s maiden appearance at the World Cup, made possible by their winning campaign at the 1997 Trophy. They were coached by former West Indian opener Gordon Greenidge, who had the privilege of playing in the first three World Cup finals.

A typically windy May day in Ireland greeted an enthusiastic, near-capacity crowd of 3,339. A shower delayed the start of the game by half an hour, adding to the blustery conditions, so much so that hot soup was on offer during the drinks intervals, and West Indian manager Clive Lloyd, two-time World Cup-winning captain, had to watch the proceedings profusely wrapped in blankets.

Bangladesh captain Aminul Islam called correctly and elected to bat first, hoping for a better show compared to the first game against New Zealand. The West Indian fielding left a lot to be desired throughout the innings, as four catches were dropped, three of them by Phil Simmons, who would go on to become coach of Ireland in eight years’ time. 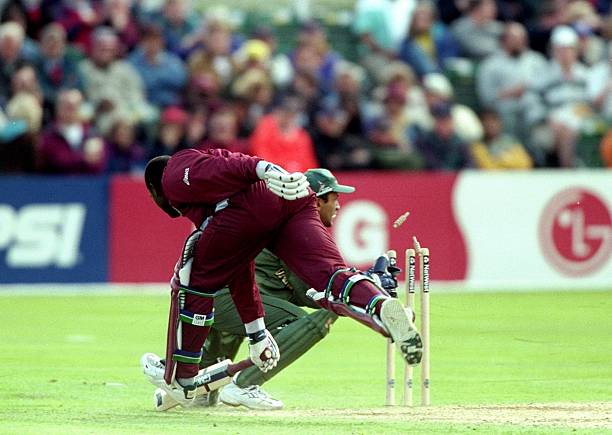 Ridley Jacobs gets run out against Bangladesh in Dublin at the 1999 World Cup, but not before he scored 51 (source – getty images/Craig Prentis)

The great Courtney Walsh struck for the West Indies in the third over to make the score 8/1, inducing a leading edge from Shahriar Hossain that went straight to Sherwin Campbell at gully. Though his usual partner Curtly Ambrose was ruled out due to a sore shoulder, Walsh was supported well by his fellow pace bowlers, particularly the promising Reon King (3/30).

King and Dillon proceeded to make short work of the three batsmen to follow. Dillon removed Akram Khan off the last ball of the tenth over, with captain Brian Lara taking a comfortable catch at mid-off. Runs were hard to come by with the ball swinging considerably, and it was not long before King got into the act by capitalising on the pressure created.

King accounted for Aminul and Minhajul Abedin, both caught behind by Ridley Jacobs, to leave Bangladesh stuttering at 55/4 in the 23rd over. At the other end, opener Mehrab Hossain decided to dig deep, and found a willing ally in Naimur Rahman, who would go on to captain Bangladesh in their inaugural Test the following year. Mehrab and Naimur held fort for the next 21 overs.

The duo took advantage of the sloppy West Indian fielding in the course of their fifth-wicket association worth 85. The wicket of Naimur was there for the taking for Dillon in the 33rd over with the scoreboard reading 84, but Jimmy Adams spilled a regulation catch at cover, much to the bowler’s consternation. Four overs later, the Bangladeshi total crept to three figures.

It took Mehrab 112 balls to reach a gritty half-century, the first by a Bangladeshi batsman at the World Cup. This was a second milestone in a short span for the 20-year-old – just two months earlier, he had become Bangladesh’s first ODI centurion, with a knock of 101 against Zimbabwe. The first six of the match came in the 39th over, with Mehrab hitting Dillon straight over his head.

Though Mehrab and Naimur produced a few pleasing strokes, the West Indies never seemed to lose control of the situation, despite their generosity in the field and profligacy with the ball – there were 38 extras, including 25 wides. The obstinate partnership came to an end in the 43rd over, when Mehrab hoicked Simmons, only to be caught by Shivnarine Chanderpaul at the boundary.

Mehrab’s 64, which consumed 129 balls and featured four fours and a six, was the top score of the innings. Two overs later, Naimur perished for 45 from 72 balls, struck on the pads by Walsh. The last five wickets fetched only 23 runs, as Walsh added two more wickets to finish with 4/25 in his ten overs, before Hendy Bryan ended the innings at 182 in 49.2 overs by castling Hasibul Hossain.

The West Indian openers, Campbell and Jacobs, began in an assured manner, sharing in a stand of 67. The Bangladeshi bowlers maintained appreciable discipline, but were largely unthreatening in defence of the modest total. The breakthrough arrived in the 21st over, when medium pacer Khaled Mahmud had Campbell (36) caught by Manjural Islam at deep square leg off a full toss.

The left-handed pair of Jacobs and Adams accumulated steadily, putting on 48 within 12 overs for the second wicket. Jacobs reached his fifty in the 31st over, but soon after, fell victim to a direct hit from Shahriar as he ran towards the striker’s end, finishing with 51 from 82 balls, with four fours and a six. This brought Lara out in the middle, with his team needing only 68 more to win.

Lara briefly entertained the Irish folk, creaming four fours in a run-a-ball 25, before being third out with the score at 150 in the 39th over, caught at cover by Hasibul off Minhajul’s off-spin. Adams, in the company of Chanderpaul, steered the West Indies home with an unbeaten 53 off 82 balls, with four fours, including the winning four that brought the seven-wicket victory with 21 balls to spare.

Walsh was deservedly named man of the match for his bowling display, as the West Indies recorded their first win. Though the Windies would go on to beat New Zealand and Scotland as well, they failed to enter the super six round due to an inferior net run rate. Bangladesh got better as the tournament progressed, notching two wins, over Scotland and Pakistan, to bow out on a high.

The next time Ireland hosted a men’s ODI was only in 2006, when the hosts played England in what was their first men’s ODI, at the Civil Service Cricket Club in Stormont, Belfast. A few months later, Ireland made waves at the 2007 World Cup in the Caribbean, a performance that led to a cricketing renaissance in the country.