Presenting the first of The Cricket Cauldron’s weekly wrap-ups on the latest happenings on the African Associate cricket scene. Ghana, Uganda, Kenya and Namibia were among the countries in focus during the week gone by.

Ghana, led by Issac Aboagye, finished unbeaten to emerge victorious at the ICC World Twenty20 Africa Region Qualifier A, held at the Tafewa Balewa Square Oval in Lagos from April 14-21. They won five out of their six games (with their second-round game against Sierra Leone being a washout) in the four-team, double round-robin competition, and collected 11 points to top the table.

Ghana and hosts Nigeria ended up as the two teams to progress into the Africa Regional finals, thus moving forward on the pathway to the 2020 World Twenty20 in Australia. Having already beaten Nigeria by seven wickets in the first round, Ghana repeated the dose in the second round clash with a four-wicket win.

Nigeria were skittled out for 73, thanks to Kofi Bagebana’s 4/22, which was chased down by Ghana in the 14th over. The home side finished second with eight points, followed by Sierra Leone in the third place with five points. The Gambia failed to win a single game, crossing 100 only twice, and recorded the lowest total – 56 all out against both, Ghana and Nigeria, in the second round.

Nigerian captain Chimezie Onwuzulike logged a tournament-high of 234 runs at 46.80. The leading wicket-takers were 15-year-old Nigerian Mohameed Taiwo and Sierra Leone’s Abubakarr Kamara, both of whom scalped nine wickets. 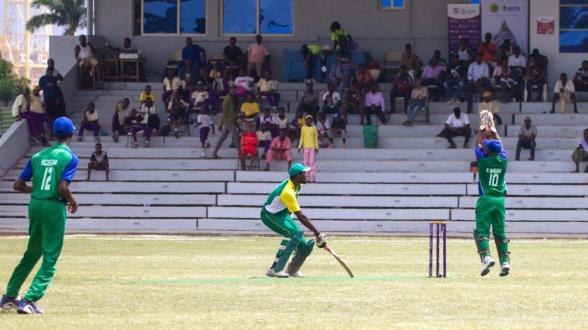 Action from the second round match between hosts Nigeria and Sierra Leone at the ICC World Twenty20 Africa Region Qualifier A. Nigeria won by six runs (source – ICC)

The Cricket Cranes announced a 15-man squad for the ICC World Cricket League Division Four, which will be contested between six teams in Malaysia from April 29 to May 5.

Uganda were relegated to Division Four after finishing fifth out of six teams at the WCL Division Three at home last year, and will battle it out with Malaysia, Denmark, Bermuda, Jersey and Vanuatu in a bid to return to Division Three. The team will be captained by Roger Mukasa, with former Kenyan great Steve Tikolo as the head coach.

Also, the Lady Cricket Cranes named a 14-women squad that will travel to Zimbabwe on the coming weekend for a Women’s T20 Challenge, which will also feature Namibia and Tanzania besides Uganda and the hosts.

This tournament gives Uganda a great opportunity to find their best combination, ahead of the crucial eight-team Women’s World Twenty20 Qualifier in the Netherlands in July. The 20-year-old Kevin Awino will lead the side.

Kenya’s beleaguered situation was given a glimmer of hope, as retired cricketers gathered for a reunion at the Nairobi Gymkhana, where they pledged to revamp the game in the country and promised to chart a way forward in the presence of present cricketers, officials, umpires and members of the local cricket community.

Former captain Aasif Karim, who represented Kenya at three successive World Cups from 1996 to 2003, said that cricket leadership should be left to sincere individuals who are not out to use the sport for their personal gain, but to serve.

Also present was David Waters, the chairman of the national selection committee, who proposed a reduction in the number of teams playing in the domestic league, to make it more competitive.

Kenyan cricket has endured a miserable past few months, during which they finished bottom, without a single win, at the World Cricket League Division Two in Namibia, a performance that led to the resignations of the board president Jackie Janmohammad, coach Thomas Odoyo and captain Rakep Patel, and ultimately, the dissolution of Cricket Kenya by the government.

Namibia’s first appearance in the final of the Sunfoil Three-Day Cup, the provincial first-class tournament in South Africa, resulted in defeat by an innings and 25 runs at the hands of KwaZulu-Natal at the iconic Kingsmead in Durban.

Batting first, Namibia were bowled out for 132 courtesy a return of 5/18 from left-arm spinner Senuran Muthusamy. Michael Erlank (139) powered KwaZulu-Natal to 334/4, after which the Namibians imploded again, this time for 177. Only Jan Frylinck (68) showed fight, as pacer Keith Dudgeon took 5/32. The scheduled four-day affair lasted less than two days.

Captain Sarel Burger and vice captain Craig Williams had retired from cricket after Namibia’s last-round match against Free State in February, which meant that Stephan Baard was named as the skipper for the final.

Williams was Namibia’s highest run-scorer in the tournament, with a tally of 687 runs at 52.84. Their highest wicket-taker was the hugely impressive left-arm spinner Bernard Scholtz, who bagged 35 wickets at 20.31 apiece. A second-place finish was a massive improvement for Namibia, after having got the least number of points in the 2016-17 edition.

One thought on “In Focus – The African Associate cricket weekly 1”