The 2007-08 Intercontinental Cup was one of Namibia’s most successful ICC tournaments. Despite being one of the two teams without ODI status in the eight-team competition, Namibia finished only one point behind leaders Ireland in the league table – not losing a single game – before going down by nine wickets in the final.

That they made it to the final had a lot to do with an astonishing innings by all-rounder Gerrie Snyman – who announced his retirement last week – in their third match against Kenya at Sharjah from January 29 to 31, 2008. Kenya eventually finished third in the table, and this extraordinary encounter was the only game they lost. Both sides came into this match on the back of two wins each.

The Namibian openers were out cheaply after Kenya elected to field. Dawid Botha fell to Peter Ongondo without scoring, while Jan-Berrie Burger was dismissed by Thomas Odoyo for nine. Raymond van Schoor made an effort to revive the innings, but wickets fell around him with regularity – he was sixth out for 39 with the score at 136, castled by left-arm spinner Hiren Varaiya (3/33).

Wicketkeeper Tobias Verwey top-scored with 43* at a run a ball from number seven, but the innings ended tamely at 183, the last five wickets falling for 47. Veteran skipper Steve Tikolo ate into the tail to take 3/24 within six overs. Kenya suffered a poor start as well, slipping to 42/4 before Tikolo counterattacked with 45 from as many balls. They finished the wicket-filled first day at 108/5.

Collins Obuya scored a patient, unbeaten 76, and along with Odoyo, helped Kenya level scores with five wickets intact. Left-arm medium pacer Kola Burger (5/68) was instrumental in a collapse of 4/6, before Obuya and Varaiya added 40 for the final wicket to give Kenya a lead of 46. As Namibia came out to bat again, they were immediately put on the backfoot by the Kenyan pace trio.

Botha perished without scoring again, this time a victim of Odoyo. Jan-Berrie Burger and van Schoor were devoured by Peter Ongondo, whereas Nehemiah Odhiambo got rid of captain Louis Burger. Namibia were tottering at 42/4, and were still five runs away from taking the lead. Nevertheless, Snyman, having come in at 9/2, was still there and was about to go on a rampage.

What unfolded during the rest of the day was nothing short of incredible.  Snyman and Kotze put on 56 for the fifth wicket, with the latter contributing only seven. Soon after, Verwey departed for a single to make the score 105/6. With their lead only 59, Namibia were still a long way from turning the tables on the opposition. However, this was going to be Gerrie Snyman’s day to remember. 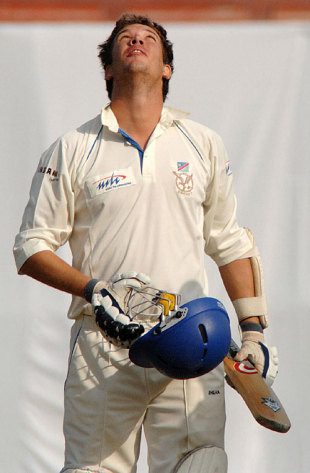 Michael Durant was an ideal foil for Snyman as the pair raised a game-changing 133 for the seventh wicket. It was during this partnership that Snyman launched into the Kenyan attack with stunning ferocity. Fours and sixes began to leak from his bat as if there was no tomorrow, as he single-handedly slaughtered the bowling to conjure one of the most exceptional innings in first-class history.

The extent of Snyman’s impact can be gauged from the fact that Durant contributed only 13 – from 141 balls – of the 133 runs added for the seventh wicket. All he needed to do was stay put, as the stroke-making at the opposite end reached jaw-dropping proportions. By the day’s end, Namibia were 241/8, ahead by 195. Snyman was unbeaten on a staggering 194, and he was not done yet.

Snyman reached his double hundred in the first over of the third day, and went on to extend his score to 230 before being the last man out, bowled by Collins Obuya, at 282. He faced only 201 balls, and hammered 22 fours and 11 sixes. He scored a bewildering 81.56 % of the team total; the figure grows to 84.25 % if only runs off the bat are considered. It was a one-man show in the truest sense.

Set 237 to win, the dazed Kenyans capitulated and were bowled out for 135. Pacers Kola Burger (4/37) and Bjorn Kotze (3/22) did the bulk of the damage, but no one would deny that none of this would have been possible without Snyman’s outrageous onslaught. Namibia’s 101-run victory fetched them 14 points, enabling them to take a two-point lead over second-placed Kenya in the table.

Namibia’s 282 is the lowest first-class total to include a double century. Snyman’s share of 81.56 % of the total is the second highest in first-class history, only behind the 83.43 % achieved by Glenn Turner, who scored 141* out of 169 for Worcestershire against Glamorgan at Swansea in 1977. In 2012, Snyman scored another double century against Kenya, this time a blazing 201* at Windhoek.

Just two months prior to his Sharjah special, Snyman had bludgeoned a 113-ball 196 in a World Cricket League Division Two game against the United Arab Emirates at Windhoek. This innings was studded with as many as 17 sixes – a List A record. It went in vain though, as the UAE rather comfortably chased down Namibia’s imposing 358/7 to win by five wickets, with 27 balls to spare.

Snyman’s 230 is the highest first-class score by a Namibian, and is the fourth highest individual score in the history of the Intercontinental Cup, behind Ryan ten Doeschate’s 259* for the Netherlands against Canada at Pretoria in 2006-07, David Hemp’s 247* for Bermuda against the Netherlands at Pretoria in 2006-07, and Ed Joyce’s 231 for Ireland against the UAE at Dublin in 2015.