The gripping ICC World Cricket League Division Two, hosted by Namibia, culminated today, with the United Arab Emirates beating Nepal by seven runs in the final. By virtue of finishing in the top two, both teams have ensured their presence at the ten-team World Cup Qualifier in Zimbabwe next month. Here is a look at the best performers from the tournament in the form of a WCL XI.

The Emirati captain led from the front with a pivotal all-round display. He scored 183 runs at 36.60, including two fifties – a solid 73 that set up the UAE’s thumping first-round win over Kenya, and a sedate 51 in the final. More significantly, Mustafa took 13 wickets at 10.84 with his off-spin, his best haul being 5/34 against Canada. He also returned 3/31 in the must-win clash against Namibia.

Mustafa’s fellow opener Ashfaq Ahmed, who made his List A debut only last December, finished as the second highest run-getter of the tournament. His tally of 237 runs at 39.50, scored at a strike rate of 94.04, included a belligerent 114 in the final, which was the highest individual score in the tournament. He earlier scored 73 against Kenya, in the course of a 133-run opening stand with his captain.

Gunasekara led the run-scoring for the Canadians, who agonisingly fell short of confirming their ticket to Zimbabwe. He began with a barnstorming 46 against Oman and followed it up with equally sprightly efforts in back-to-back games – 83 against Kenya and 57 against Namibia. Gunasekara hit 12 sixes in the tournament, the second joint highest with Kenya’s Dhiren Gondaria.

Nepalese captain Paras Khadka topped the run charts with 241, and also had the satisfaction of seeing his team make it to the World Cup Qualifier (source – ICC)

The dependable Khadka put his experience to good use, leading Nepal to the top of the table with his inspirational captaincy. He was at the forefront with the bat, topping the run charts with a tally of 241 at 48.20. Though Nepal lost the final narrowly, Khadka struck a stroke-filled 112*. He also scored a key 51 in the league game against the UAE, and his 15 sixes were the most in the tournament.

Even though Williams’ all-round performance was not enough to ensure a top-two finish for the hosts, Namibia’s opponents had plenty to ponder about whenever he was in the middle. His 225 runs at 45.00 were scored at a strike rate of 93.36, while his medium pace fetched him nine wickets at 22.88. He scored 82 to help Namibia topple hitherto unbeaten Canada in the fourth round.

With 229 runs at 69.00, the third highest in the tournament, Gerhard Erasmus was a vital contributor in the middle order for Namibia. His finest performance came against Oman – batting at number six, he scored 63* to steer Namibia, who were chasing 166, from the depths of 65/7 to a stirring two-wicket win. He later cracked 66 against Canada and a fighting 58 in defeat to the UAE.

Canada’s Hamza Tariq was the best wicketkeeper of the tournament, affecting 14 dismissals – 12 catches and two stumpings – which were five more than the second-best tally. His best effort was against Namibia, when he recorded three catches and a stumping. 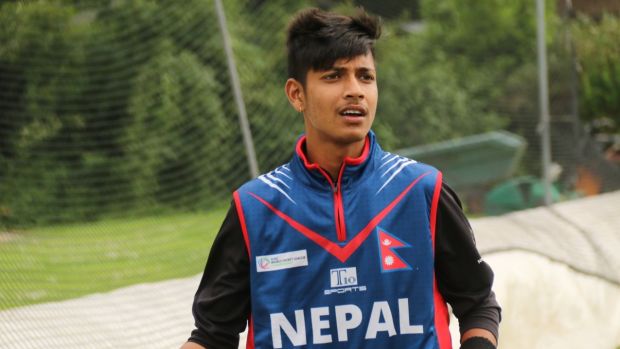 Leg-spinner Sandeep Lamichhane, who was the joint highest wicket-taker with 17 scalps, was instrumental to Nepal’s second-place finish at the WCL Division Two (source – smh.co.au)

Off-spinner Nikhil Dutta collected 11 wickets at 11.45 apiece, while maintaining a remarkable economy rate of 2.47. He took at least one wicket in each of the six games, underlining his worth as Canada’s strike bowler. His stifling spell of 2/21 from ten overs, which included the key wickets of Ashfaq Ahmed and Shaiman Anwar, enabled Canada to defend a modest total against the UAE.

With numbers very similar to Dutta’s, slow left-armer Bernard Scholtz was the best bowler on display for the home team. His 11 wickets came at an average of 11.81, and an even better economy rate of 2.45. He took four wickets in an innings twice – a career-best 4/11 from nine overs in the heartbreaking one-wicket loss to Nepal, and a match-winning 4/15 from ten overs against Kenya.

Bilal Khan was the best pace bowler in a tournament dominated by the spinners. The left-arm medium pacer finished as the joint highest wicket-taker with 17 wickets at 10.76 apiece. Two of the four five-wicket hauls in the tournament belonged to Bilal – his 5/33 almost upstaged Namibia, while his 5/40 in the fifth-place playoff against Kenya ensured that Oman avoided the wooden spoon.

Instrumental to Nepal’s success was the 17-year-old leg-spinner Sandeep Lamichhane, who was the joint highest wicket-taker with a bag of 17 wickets at 10.35. He instantly made an impact, taking 4/18 against Namibia in the opening game, and later bettered it with 5/20 from ten overs, inclusive of five maidens, against Kenya, a new record for the best List A figures by a Nepalese bowler.