As far as bizarre limited-overs contests go, there have not been many to rival the second semifinal of the 1976-77 Gillette Cup, Australia’s 40-over (eight-ball) domestic competition. This gripping duel was played out on 12th December, 1976, between Western Australia and defending champions Queensland at the Western Australian Cricket Association (WACA) Ground in Perth.

Queensland’s bowlers were in fine form, having bundled Tasmania out for 89 in the quarterfinal at Brisbane. The fiery Jeff Thomson and the dependable Geoff Dymock made for a quality new-ball pair, backed up by Phil Carlson and captain Greg Chappell. Opening the innings for Queensland was the great Vivian Richards, coming off a confident 50 in the quarterfinal.

Chappell’s opposite number was Rodney Marsh, leading a side boasting the likes of Dennis Keith Lillee and Bruce Yardley. While Yardley was yet to make his international debut, Lillee was established as one of the fiercest pacemen on the scene. Richards and Chappell facing off against Lillee, not to mention the presence of Thomson and Marsh. It indeed made for an enticing encounter.

Chappell inserted Western Australia in to bat on a typically bouncy WACA track, and Thomson provided an early scalp by removing Bruce Laird with the score on eight. Ric Charlesworth, who would go on to become a hockey legend for the Kookaburras, and Robert Langer, an uncle of 2000’s star Justin, assuredly added 42 for the second wicket. It indicated little of the mayhem to follow.

Dymock castled Langer, while Carlson had Charlesworth leg-before at the other end for 25, which would end up as the highest score of the match. Matters grew worse for the hosts, with Dymock getting rid of Craig Serjeant and Marsh for ducks in consecutive deliveries. Kim Hughes, a future Australian captain, too perished without scoring, as he was cleaned up by Carlson in the following over.

This incredible passage saw Western Australia lose five wickets for just one run, as they nosedived from 50/1 to 51/6. Yardley clubbed a quick 19 from number eight, before he and Lillee fell to Chappell in the same over. The end was quick, with another collapse of 4 for 1 terminating the innings at 77 in 22.5 overs. Carlson (3/17) and Dymock (3/20) were the wreckers-in-chief.

Not even the most die-hard of optimists among the 9463-strong crowd would have bet on a Western Australia victory at the innings break. With nothing to lose, Marsh attempted to galvanise his crestfallen teammates, saying: “There’s a big crowd here. Let’s not let them down. Let’s make them fight for it.” That was enough for Lillee, with the onus now on him to perform for his home side.

Lillee responded with: “Make them fight for it? We’re going to beat those bastards!” He was the first one to rush on to the field, even before Marsh led the rest of the side out for the second innings. Could he produce a spell for the ages? Even if he did, would it be enough? Surely, a target of 78 was no big deal for luminaries such as Richards and Chappell? Or so they thought.

The first over of the chase presented the clash of the gladiators – the might of Richards, man of the match in the quarterfinal, versus the fury of Lillee, who was invigoration personified. Lillee let it rip from the word go, peppering the Master Blaster with a barrage of bouncers, four of them on the trot. It was evident that it was not going to be a piece of cake for Queensland.

After five thrilling deliveries, Lillee disturbed Richards’ woodwork with a peach to dispatch him back for a duck. So pumped up was he that he kicked the stumps while celebrating, as the crowd found its voice. The King was dethroned, yet it required something extraordinary to slay the enemy.  Alan Jones and Alan Ogilvie thwarted the bowling well and moved the score along to 23.

Lillee then struck twice in as many overs, first having Ogilvie caught by Langer in the slips, and then gobbling the prized wicket of Chappell, who was caught behind by Marsh for two while going for the hook. Malone did his bit as well, nailing Carlson and Jones (22) in quick succession. Queensland were now 35/5; the seemingly minuscule target was fast appearing to be a tall order. 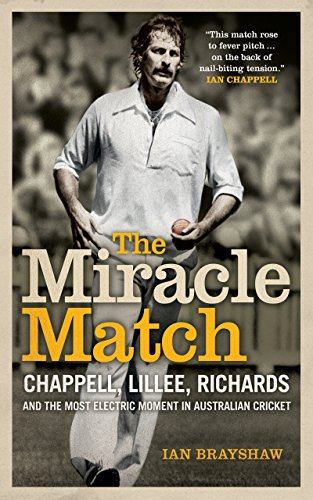 All-rounder Ian Brayshaw wrote a book, ‘The Miracle Match’, in 2014, a fitting tribute to an astonishing game of cricket (source – amazon.co.uk)

Marsh pouched his second catch off Wayne Clark, the victim being Jeffrey Langley, to make the score 40/6. Wicketkeeper John Maclean and Graham Whyte thereafter combined to share 21 runs – worth their weight in gold in the heat of the battle – for the seventh wicket. However, just when the game was veering towards Queensland, Clark bowled Whyte.

Two balls later, Clark repeated the dose to Thomson. Queensland 61 for 8, hanging by a thread to defend their title. The spectators anticipated the unthinkable and a place in the final against Victoria well and truly beckoned. Maclean, who had dug in for 44 balls to score nine, fell short at the non-striker’s end after Denis Schuller attempted a risky single. Queensland 62 for 9.

It was all over a ball later, as Schuller cut Lillee to gully, where Serjeant held an easy catch. Queensland were shot out for 62 in 20.3 overs, contriving to lose a most remarkable contest by 15 runs. The crowd swarmed on to the field to congratulate Lillee, who was later named man of the match for his return of 4/21 in 7.3 overs. The pace ace was assisted ably by Clark (3/19) and Malone (2/19).

The numbers from the game are testimony to its uniqueness – a grand total of 139 runs were mustered for the loss of 20 wickets in 43 overs. Only five men reached double figures. Eight of the 20 batsmen to fall failed to open their account. This result inspired Ian Brayshaw, who played for Western Australia on that dramatic day, to bring out a book titled ‘The Miracle Match’ in 2014.

Western Australia proceeded to win the Gillette Cup, defeating Victoria in a nail-biting final at the Melbourne Cricket Ground six weeks later. Needing 165 to win, Western Australia were staring down the barrel at 74/7, before number nine Malone hit an unbeaten 47 to see his team home by one wicket with three balls to spare.