The olden days of first-class cricket in England were replete with intriguing and bizarre fixtures, such as One-Legged XI v One-Armed XI, Smokers v Non-Smokers and Over 38 v Under 38, to name a few. Among these off-beat encounters were seven matches titled Married v Single, contested between – as the name suggests – teams featuring married and unmarried men respectively.

There have been mentions of a few Married v Single games played between 1794 and 1815 in Cambridge, but the first instance of a first-class match between the Married and the Single occurred at Lord’s, a three-day match starting from June 1, 1829. William Searle, who played for Kent and Surrey, top-scored with 48 in the Married’s first innings total of 153.

The Single snatched a narrow lead of three runs on the first innings, after a fine 75 from Herbert Jenner, of Cambridge University and Kent and a future President of the Marylebone Cricket Club (MCC), steered them to 156. No other singleton crossed 20. Jenner was not done yet though, as he took five wickets to help bowl the Married out for 93 in the second innings.

Faced with a target of 91, the Single capitulated for only 63, thus going down by 27 runs. Besides James Broadbridge, who made 25, none of the batsmen could stand up to the round-arm duo of William Mathews and Frederick Lillywhite, one of the leading cricketers of the pre-Test era and an uncle of James Lillywhite, who represented England in her first Test match in 1876-77.

July 11, 1831 saw the start of the second Married v Single clash at Lord’s, with the Single exacting revenge in a low-scoring dogfight. Thanks to a five-wicket haul from James Cobbett, the Single were bowled out for 104, the only three-figure total of the game. Edward ‘Ned’ Wenman, a Kent stalwart of yore, then starred for the Single with a fifer of his own as the Married were skittled out for 43.

The only married gentleman to display valour was Nicholas Felix, who carried his bat for 30*. Frederick Lillywhite gave the Married renewed hope by taking six wickets in the second dig as the Single could manage just 42. Needing 104 for the win, the Married were all out for 81 – Wenman took three wickets to add to his five, not to mention his 35 and 24, both innings-topping scores. 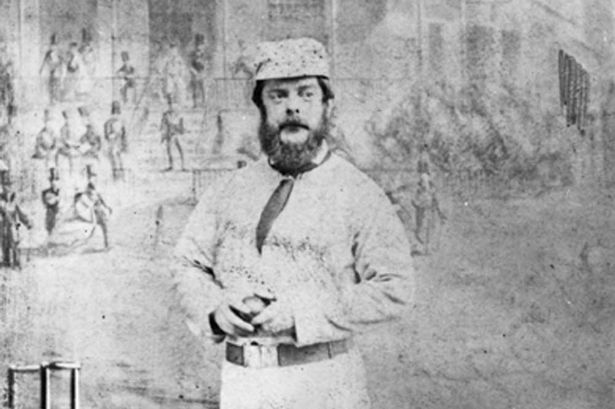 John Wisden took 12 wickets for the Single against the Married at Lord’s in 1849, playing a pivotal role in his side’s three-wicket win (source – gettyimages/mirror.co.uk)

It was not until 1844 that the Married and the Single squared up again, on September 12. This time, the venue was not Lord’s, but Higher Common Ground in Tunbridge Wells, which was hosting its maiden first-class match. Unlike in 1829 and 1831, when the game ended within two days, this made it to the third day. As for the ground, it had its last taste of first-class cricket in 1884.

Part of the Married XI was the 37-year-old roundarm all-rounder Alfred Mynn, nicknamed ‘Lion of Kent’ and considered to be one of the earliest greats of the game. Incidentally, his elder brother Walter Mynn was opening for the Single. The Married slipped to 49/5 after electing to bat first, before a lower order revival saw them post 134. Kent’s William Hillyer returned with 5/45.

The Single replied with a poor performance, crashing to 39/6 before being dismissed for 82. Alfred Mynn was the wrecker-in-chief, with figures of 6/34, bowling unchanged with James Dean (3/48). The Married totalled 101 in the second innings to set the Single a target of 154. William Martingell was the pick of the bowlers with 4/31, whilst Hillyer took three to give himself eight in the match.

The situation was looking bleak for the Single as Mynn and Dean combined to reduce them to 28/4. William Napper and stumper Edward Wenman staged a rescue act, putting on 60 for the fourth wicket. However, the last laugh belonged to the Married as the Single subsided from 105/5 to 144, losing by only nine runs. Dean (5/54) and Mynn (4/65, 10/99 in the match) starred once again.

The fixture returned to Lord’s for its fourth outing, from June 11, 1849. John Wisden, Sussex’s 23-year-old all-rounder, was among the Singles. He would go on to launch the Wisden Cricketer’s Almanack fifteen years down the line. The Married threw down the gauntlet with a total of 203, courtesy of a third-wicket stand worth 99 between William Clarke (71) and Thomas Box (42).

Wisden, who bowled underarm, took five wickets. But he contributed little with the bat, getting out for zero and being among the procession of wickets to fall as the Single crumbled from a steady start to 65/6, losing six for 16. George Parr scored 61 from number eight to stretch the eventual total to 180. Frederick Lillywhite, now aged 57, and James Dean shared the ten wickets equally.

Wisden snared seven wickets, including Mynn for a duck, in the third innings to end with 12 victims in the match. The Married were well placed at 82/2, but could manage only 147. The chase began with a handsome opening stand of 88 between Robert Grimson (76) and William Nicholson, before the score stumbled to 152/7. James Chester kept his cool though, guiding the Single to a three-wicket win.

The great W.G Grace carried his bat for 189 as the Single beat the Married by an innings and 73 runs at Lord’s in 1871 (source – telegraph.co.uk/alamy)

The next fixture was played at the Oval, from August 9, 1858, and saw another narrow win for the Single. John Jackson (7/62) helped bowl the Single out for 188, to which the Married, riding on Robert Carpenter’s 81, replied with 221. John Wisden (5/39) took five and so did William Caffyn (5/94). Opening for the Married was Julius Caesar. Not the Roman statesman, of course.

A manic second day featured the fall of 26 wickets. Trailing by 33 on the first innings, the Single batsmen produced an ordinary display and were kept to 124. Defending only 91, Heathfield Stephenson and Wisden bowled unchanged to condemn the Married to 75 all out. Wisden (5/36) took his customary fifer, backed by able support from Stephenson (4/39) at the other end.

Back to Lord’s again it was on July, 10, 1871, a match held for the benefit of Kent’s Edgar Willsher, renowned for his role in the shift from roundarm bowling to overarm bowling. The first day was marked by the brilliance of William Gilbert ‘W.G’ Grace, who was eight days shy of his 23rd birthday. Opening the innings for the Single, he carried his bat for a stellar 189* out of a total of 310.

Alfred Shaw, who would go on to bowl the first ball in Test cricket, took 5/70 for the Married. There was no play on the second day due to rain, but the final day saw the Single bowlers, led by Arnold Rylott (5/53), reduce the Married to a woeful 80/8. It was only thanks to a fightback from Shaw and James Southerton, who would also play in the inaugural Test, that the Married could reach 159.

Following on 151 runs in arrears, the Married imploded in even worse fashion in the second innings. After Rylott and Robert Clayton knocked over the top order, James Lillywhite, bowling left-arm slow medium, made short work of the latter half of the innings. The Married melted from 78/5 to 78 all out, with Lillywhite, who would become England’s first Test captain, returning figures of 6-4-5-5.

The last Married v Single fixture, the only one in the Test era, was played at Lord’s from May, 23, 1892. The Single maintained their stranglehold with a fifth consecutive win, and each over now had five balls, as against four balls in the previous six encounters. England’s medium-fast spearhead George Lohmann bowled 56 overs to take 7/121 on the opening day, restricting the Married to 230.

The Single edged a lead of 66 despite being 172/7 at one point, thanks to fifties from John Read (61), Lohmann (58) and Robert Henderson (50). Lohmann further bettered his match, taking 5/58 in the second innings to ensure that the target for the Single was a gettable 119. A jittery start of 9/3 was overcome due to opener Andrew Stoddart’s 53, who paved the way for a five-wicket victory.