Associate nations have invariably brought their own distinctive flair to World Cup tournaments. From the plucky Sri Lankan batsmen facing up to Dennis Lillee and Jeff Thomson in 1975, to Ireland’s never-say-die spirit that almost earned them a quarterfinal berth in 2015, the non-Test teams have provided some of the most absorbing moments in the history of the showpiece event.

However, it was not until the 1996 edition that two Associate teams faced each other. The increase in the number of teams to 12, from nine in 1992, paved the way for the availability of three slots for Associates for the first time. Until then, the most number of non-Test teams in a World Cup edition was two – in 1975 (East Africa and Sri Lanka) and 1979 (Canada and Sri Lanka).

The teams to qualify from the 1994 ICC Trophy held in Kenya were all first timers – the United Arab Emirates (UAE), Kenya and the Netherlands finished as the top three to book their places in the 1996 World Cup, co-hosted by India, Pakistan and Sri Lanka. Kenya were drawn in Group A, whereas the Netherlands and the UAE were clubbed in Group B.

The match between the Netherlands and the UAE at the Gaddafi Stadium in Lahore on March 1, 1996 thus marked the first instance of an ODI fixture not to involve a Test-playing side. Not surprisingly, both teams had lost each of their previous games, making this a tussle to avoid the wooden spoon in the group.

Though the UAE had won the ICC Trophy two years back, on the way defeating the Netherlands by six wickets in the semi-final, it were the Dutch who had performed relatively better in the lead-up to this match. Led by Steven Lubbers, they impressed against England at Peshawar, losing by only 49 runs, and had managed to bat out their 50 overs on all three occasions.

The UAE team must have felt at home, since six of their eleven were born in Pakistan, four of them in Lahore. Their captain Sultan Zarawani, who had made news earlier in the tournament by facing South African speedster Allan Donald wearing a sun hat, won the toss and elected to field, just as he had done in the semifinal of the 1994 ICC Trophy. 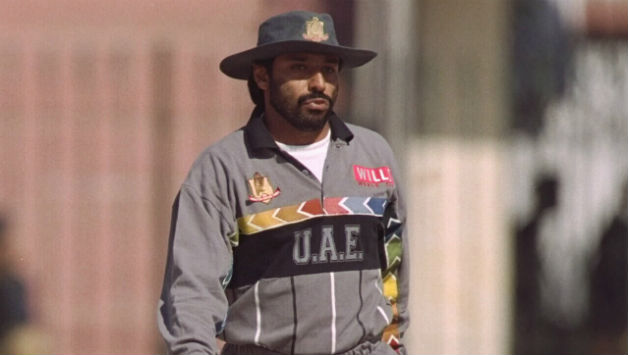 Sultan Zarawani captained the UAE to their maiden ODI victory, against the Netherlands in the 1996 World Cup (source – gettyimages)

The 47-year-old opener Nolan Clarke, the oldest ODI player of all time and scorer of an unbeaten 121 in the crucial third-place playoff match against Bermuda in the ICC Trophy, was out without scoring with only three runs on the scoreboard. The Barbados native fell to medium pacer Shahzad Altaf, who at 38 was the oldest member of the Emirati squad.

Peter Cantrell (47) and Flavian Aponso (45) dug in for a dour second-wicket stand worth 74 runs before the latter was caught and bowled by off-spinner Shaukat Dukanwala, who was born in Bombay and played first-class cricket for Baroda. A relatively brisker stand of 71 followed for the third wicket, with Tim de Leede joining Cantrell.

At 148/2, the Netherlands seemed to have laid a decent base for a flourishing end. But it was not to be as regular wickets stifled their chances . Left-arm spinner Azhar Saeed’s twin strikes within the space of six runs kept the Dutch in control; he first caught de Leede off his own bowling and then dispatched the obdurate Cantrell, having the former Queensland player caught behind.

Lubbers was sent back by his opposite number Zarawani soon after, and despite an attacking sixth-wicket stand of 32 between Klaas-Jan van Noortwijk and Roland Lefebvre, it was inevitable that the Netherlands would reach nothing more than a middling total. Dukanwala made short work of the lower order, grabbing the last four wickets as the score slid from 200/5 to 210/9.

The Netherlands eventually finished at 216/9 from their 50 overs, with Dukanwala having the satisfaction of returning figures of 5/29 in ten overs. This was the first five-wicket haul in an ODI by a bowler from an Associate team, and the second-best bowling figures in the 1996 World Cup after Paul Strang’s 5/21 for Zimbabwe against Kenya.

The Lahore-born opening pair of Azhar Saeed and Saleem Raza gave the UAE a rampaging start, scoring 94 runs off the first 15 overs. Their partnership progressed to 117 before Saeed was run out for a watchful 32. By contrast, Raza was going hammer and tongs at the other end, severely diminishing Dutch hopes of defending the modest total.

Two quick wickets, those of Mazhar Hussain and Raza, for three runs made the score 138/3, but these were minor blips in the chase. Raza struck a belligerent 84 from just 68 balls, studded with eight fours and six sixes – which was then the joint second-highest number of sixes by a batsman in a World Cup innings – before being dismissed by Lubbers.

New man Mohammad Ishaq, yet another player born in Lahore, continued from where Raza left, hitting an unbeaten 51 from 55 balls. He shared in an unbroken fourth-wicket partnership worth 82 with Vijay Mehra, and the duo steered the UAE to a convincing seven-wicket win with 34 balls to spare. This was the UAE’s maiden ODI victory.

With this win in their last match, the UAE ensured that they finished fifth out of the six teams in the group. The Netherlands went on to lose their final game of the tournament by a wide margin, to South Africa by 160 runs. They had to wait till the 2003 World Cup to notch their first ODI success, when they defeated Namibia by 64 runs at Bloemfontein.

The Man of the Match award was shared between Dukanwala and Raza. Incidentally, Raza was also the man of the match in the aforementioned ICC Trophy semifinal between the two teams in 1994. His 84 remained the highest ODI score by a UAE batsman until 2013-14, while Dukanwala’s haul is still the only ODI fifer by a UAE bowler.

However, it is unlikely that the next World Cup, to be held in England in 2019, would see such a fixture. Thanks to the deplorable decision of limiting the number of teams to ten, chances of two Associate teams qualifying are remote, which says a lot about how detrimental this move is set to be for scores of cricketers from emerging nations who have aspired to play on the big stage.