Australia suffered their first 5-0 defeat in a bilateral ODI series last month, with South Africa dominating them in a high-scoring home series. Thus, every Test nation has now been whitewashed by this margin at least once. In this post, we look back at the first instance of an ODI series ending in a 5-0 result.

It was only after three editions of the World Cup that the first five-match bilateral ODI series was played, even though Australia’s triangular World Series was running since 1979-80. The mighty West Indians were touring India in the winter of 1983 and they had a point to prove, having been beaten by the Indians in the World Cup final less than four months earlier.

Besides the World Cup final, which they won by 43 runs, India had overpowered the West Indies on two other occasions earlier in the year – by 27 runs at Albion, Guyana and by 34 runs at Old Trafford in their opening World Cup match. Clive Lloyd’s men had thus faced three defeats in their last five ODIs against India.

The first ODI on 13th October was significant as it was the first international match to be played in the state of Jammu and Kashmir, the venue being the Sher-i-Kashmir Stadium in Srinagar. In a trend that was to repeat throughout the series, the game was reduced to 45 overs a side due to poor weather. Lloyd had no hesitation in fielding first.

India were skittled out for a modest 176 in the 42nd over, with Kris Srikkanth’s 40 being the highest score. The innings had started well, the score reading 65/1 with Srikkanth and Dilip Vengsarkar at the crease. However, regular wickets stymied the innings; off-spinner Roger Harper taking 3/34.

In reply, the West Indies were cruising at 108/0 in 22.4 overs when bad light stopped play for good. Openers Gordon Greenidge (44*) and man of the match Desmond Haynes (55*) saw off a disciplined start from the Indian bowlers to lay a strong foundation. Since India’s score at the same point was 81, the visitors were adjudged victors by 28 runs. 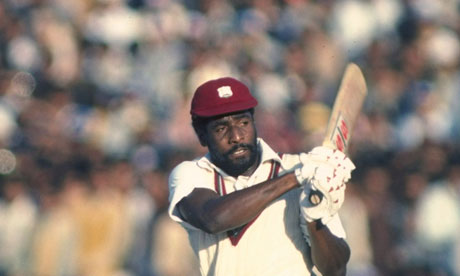 The first two Test matches of the tour then followed. The West Indies produced an authoritative display to win the first of them at Kanpur by an innings and 83 runs, before India upped their game at Delhi to secure a draw. The limited-overs series resumed on 9th November.

The venue for the second ODI, a 49-over match, was Vadodara’s Moti Bagh Stadium, where India had a slow start before they ended with an uninspiring 214/6. Ravi Shastri top-scored with 65, though he consumed 125 balls. The West Indian chase was not exactly convincing either, but Greenidge’s patient 63 was enough to notch a four-wicket win for his side with seven balls to spare.

A week after going 2-0 up in the ODI series, the West Indies went ahead by the same margin in the Tests as well, with a 138-run victory at Ahmedabad, where India crumbled for 103 in the fourth innings after being on an even keel for most part of the game. The visitors were making quite a statement, thus disappointing the partisan crowds. The fourth Test at Mumbai was drawn.

The ODI series was duly secured, following another emphatic win in the third game at the Nehru Stadium in Indore on 1st December. India were reduced to 39/3 after Kapil Dev elected to bat. Mohinder Amarnath ground out a  plodding knock of 55 and shared in a stand of 84 for the fourth wicket with Ashok Malhotra, who hit a breezy 40.

Shastri, batting at number eight, scored a quick, unbeaten 41 to boost the Indian total, which eventually ended at a respectable 240/7 in 47 overs. However, Greenidge put paid to Indian hopes yet again as he cracked 96, sharing in an opening stand of 149 with Haynes (54) that sealed the contest.

The great Vivian Richards had signalled his intentions with a typical 49* from 50 balls at Indore, a week after which he launched himself into the hapless Indian bowling attack with one of the most ferocious ODI innings played. He made hay on a good batting pitch prepared for the fourth ODI at Jamshedpur’s Keenan Stadium on 7th December.

In what was another 45-over affair, India began positively with Chetan Sharma bowling Haynes cheaply with the score at 27. That proved to be a false dawn though, as Greenidge and Richards went on the rampage with a buccaneering second-wicket partnership of 221 at more than seven an over. This created a new ODI record for any wicket.

Gordon Greenidge starred for the visitors in the ODI series in India by topping the run charts with a tally of 353 at 88.25 (source – icc-cricket.com)

The stand ended when Greenidge was bowled by Shastri for 115 off 134 balls. The Barbadian opener smoked ten fours and five sixes. Richards struck a majestic 149 from just 99 balls with 20 fours and three sixes, before falling to Kapil. The Indian captain was the pick of the bowlers, with a tidy return of 3/44. Shastri came in for the harshest treatment, going for 77 in seven overs.

Richards’ blitz had supreme confidence written all over it, and it shattered the morale of the home side. Even after his dismissal, there was no respite as wicketkeeper Jeff Dujon carted 49* in 20 balls to swell the final total to an imposing 333/7. India’s required rate was 7.4 runs an over – an improbable ask by all means.

Sunil Gavaskar top-scored with 83 while Malhotra impressed again with 65 at better than a run-a-ball, but the result was a foregone conclusion. India batted through their innings and finished at 229/5, leaving the West Indies one win away from a clean sweep. ‘King Viv’ showed that he was well ahead of his time as far as ODI batting was concerned.

The West Indians refused to take their feet off the gas, as they wrapped up the Test series as well with a win by an innings and 46 runs in the fifth Test at Calcutta. The deadly Malcolm Marshall took six wickets in the second innings to help destroy India for a paltry 90.

India’s ODI ignominy was complete at the Nehru Stadium in Guwahati on 17th December. The hosts could manage a total of only 178/7 in 44 overs, with Ghulam Parkar’s 42 the highest score. The West Indies achieved the target in the 42nd over for the loss of four wickets. The sixth Test at Madras was drawn, and is best remembered for Gavaskar’s record-breaking 30th century.

The newly-crowned ODI champions were thus humbled in their own backyard. The West Indians would have possibly been vindicated that the loss in the World Cup final was but a blip, and that they remained the most feared unit in international cricket. Not once in 11 matches on the tour did they allow India the taste of victory.