The England and Wales Cricket Board (ECB) warmed up to the concept of floodlit cricket only in 1997, when the first day-night match was played under temporary lights at Edgbaston between Warwickshire and Somerset in the 40-overs Sunday League.

The idea caught on and by 2000, most counties had installed temporary floodlights at their grounds and were regularly hosting day-night matches. However, the 1999 World Cup did not feature any match under lights and England had to wait until the next year to witness its first official day-night ODI.

It was the first match of the inaugural edition of the triangular NatWest Series, played between the West Indies and Zimbabwe – the two touring teams that summer – at the County Ground in Bristol on Thursday, July 6. Around 7,000 spectators had gathered to watch this path-breaking match.

This was also Bristol’s first ODI outside of the World Cup, having hosted matches in the 1983 and 1999 editions. Jimmy Adams elected to bat on a pitch which was on the slower side. Openers Adrian Griffith and Chris Gayle gave the West Indies a sedate start, putting on 33 at three an over before the medium pace of 19-year-old Mluleki Nkala accounted for the former.

Gayle was then joined by his Jamaican teammate Wavell Hinds, and the left-handed duo strung together 68 runs at four an over to lay a reasonable foundation. Gayle was restrained throughout his innings – he scored 41 from 86 balls – before being caught short of his crease at the bowler’s end. The new man in was ‘Prince of Trinidad’ Brian Lara.

Bristol’s County Ground, home of Gloucestershire, was the first ground in England to stage an ODI under floodlights (source – bristol247.com)

Lara was in his element as he unleashed his class to delight the crowd. The West Indian innings needed a kickstart and he provided just that. Hinds fell for 51 with the score at 135 in the 36th over, following which the hard-hitting Ricardo Powell joined Lara. An entertaining partnership ensued as the last third of the innings began.

The pair added 56 from 43 balls for the fourth wicket, with Powell creaming 36 in 23 balls (five fours and a six) before holing out to Grant Flower off Gary Brent. Lara reached his fifty in the 47th over and then rushed to 60 in the next, in which he became Flower’s second victim, caught in the covers by Neil Johnson.

Lara faced 63 balls for his knock which was laced with six fours and a six. The lower order could not really provide a final flourish as the West indies were eventually kept to 232/7. The target was certainly attainable for a Zimbabwean side that had thoroughly impressed in the World Cup a year before, missing out on a semifinal berth by a whisker.

The much-anticipated lights were now switched on as openers Johnson and Craig Wishart strode out. The West Indian attack was bereft of veterans Curtly Ambrose – who was rested with an eye on the Test series against England – and Courtney Walsh, who was out injured. Zimbabwe had a big chance to notch their maiden ODI win over the Windies, this being their ninth attempt.

Zimbabwe began confidently and despite losing Wishart and Murray Goodwin to the erratic Franklyn Rose, were placed at 57/2 after ten overs. Johnson was fluent at one end and when Alistair Campbell was caught behind off Mervyn Dillon, the score read 90/3 in the 18th over. The scoring rate was healthy; wickets were the key here.

Zimbabwe’s reliable wicketkeeper-captain Andy Flower was just the man Johnson needed to forge a partnership and steady the innings. Together they adopted a sensible approach and consolidated their team’s position with a crucial stand worth 70 runs at about four an over, characterised by good running between the wickets.

The contest was still on an even keel when Flower perished, the score now 160/4 in the 36th over and the required rate five an over. Grant Flower replaced his elder brother and the Windies might have thought that another quick wicket could put them in the ascendancy. Johnson, who had by now reached a solid fifty, and Flower had other ideas though. 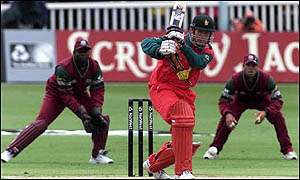 Neil Johnson struck an unbeaten 95* to star in Zimbabwe’s first ODI win against the West Indies, at Bristol in 2000 (source – bbc.co.uk)

With the West Indian fielding ordinary, Zimbabwe were blessed with another substantial partnership as the evening wore on. Johnson was now well settled while the younger Flower was in an attacking mood. Nixon McLean came in for special treatment as the pair milked him for easy runs. They upped the ante with every passing over, fast bringing Zimbabwe closer to victory.

The fifth wicket remained elusive for the Windies. Adams decided to roll his arm when the scores were level and all was lost. He bowled a wide, which sealed a six-wicket win for Zimbabwe with five overs to spare. Johnson was the fulcrum of the successful chase, scoring 95* from 128 balls with nine fours while Flower chipped in with a quick 26*. Their unbroken stand of 73 had come off just 60 balls.

Johnson was rightfully named man of the match. After eight losses on the trot to the West Indies dating back to 1983, Zimbabwe went on to win three against them in as many ODIs – they repeated the feat of Bristol at Canterbury and Chester-le-Street as well. These wins, plus one against England, were enough to put them in the final at Lord’s where they were beaten by the hosts.

Besides Bristol, Old Trafford and Edgbaston also held day-night fixtures in the tournament, England winning against Zimbabwe in both cases. The first ODI in England and Wales to feature permanent floodlights was played between England and Pakistan at Cardiff in 2006. Southampton soon followed suit later in the same series.

The past decade has seen a sea change in England’s attitude toward floodlit cricket. The rise of Twenty20 has led all the premier grounds to install permanent lights. Bristol unveiled permanent floodlights for the first time only in April 2016. Day-night internationals are today an integral part of the English summer, and we should not be surprised to see a historic day-night Test in 2017.