Almost two years have passed since Ireland’s scarcely-believable ouster from the 2014 ICC World Twenty20 in Bangladesh, when they ran into a desperately hungry Dutch outfit at Sylhet. It would not be an overstatement to say that this knockout punch had, at least for a few moments, left the Irish players as well as fans shell-shocked.

With the World T20 bandwagon now moving to India, a strong chance of redemption awaits the Irish and only they themselves can make or break their destiny.

The challenge in the tournament’s qualifying round is admittedly tougher than what William Porterfield’s men faced in 2014, what with an ever-improving Bangladesh, a dangerous Netherlands and an unpredictable Oman all part of Ireland’s pool.

The breathtaking Himachal Pradesh Cricket Association Stadium in Dharamsala will be the scene for Ireland’s three first-round games. They begin their campaign against surprise package Oman on 9th March, before moving on to crunch matches against Bangladesh on the 11th and Netherlands on the 13th.

With just one out of the four teams in the pool making it to the main round, every ball assumes importance. Ireland’s form in T20 internationals over the last year has been ordinary and has seen them slump to 15th place in the rankings.

The boys in green went down to Scotland in a home series last season, which was followed by a patchy World T20 Qualifier (which they co-hosted along with Scotland) where they finished third. In away series in the past month, they produced a 2-1 win over Papua New Guinea but were held 1-1 by UAE.

Ireland’s pre-tournament warm-ups have thrown mixed results so far, with a ten-wicket thrashing of Hong Kong offset by a six-wicket defeat to Zimbabwe. But T20 is a fickle beast and as proved on more than one occasion earlier, Ireland tend to reserve their best for major global events.

Few may regard Ireland as favourites to top the group, but underestimate them at your own peril. The core of the squad is by and large the same as 2014 : twelve of the fifteen players played in Bangladesh two years ago. Star performers Ed Joyce and Alex Cusack have since retired, but the return of Boyd Rankin to his native team has been a big positive. 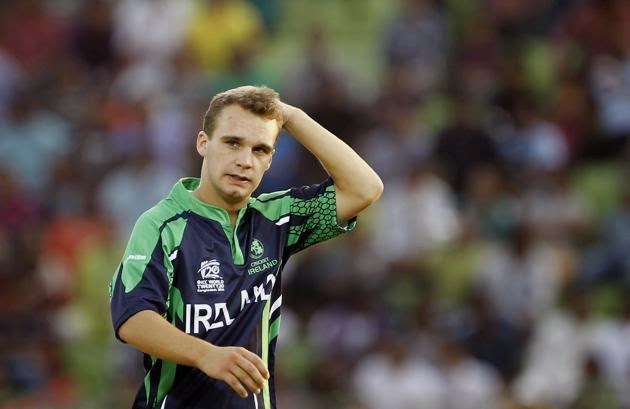 With just a few hours to go before Ireland take the field, we look at five members of the squad who have it in them to produce impactful performances that are so much needed in the shortest format.

The elder of the Poynter brothers can be a belligerent customer with the bat when on song. While his T20 international average of 21 does not exactly make for pretty reading, he has the capability to make an impact as a lower-order batsman in a line-up where natural big hitters are few.

In the abovementioned 2014 game against the Netherlands, Poynter gave a glimpse of his hitting prowess by cracking an unbeaten 57 off 38 balls with four fours and as many sixes.

His services could be best used at the number six or seven position and if he performs to his ability, we can look forward to some fireworks in the slog overs.

22-year-old McBrine has quietly become one of Ireland’s most dependable T20 bowlers. The unassuming off-spinner made his debut in the 2014 World T20 – taking 2/26 against Zimbabwe – and since has largely impressed with his control and economy.

McBrine has often given tough competition in the team to senior spinner George Dockrell, and there is a high chance that both will bowl in tandem. He recently starred in Ireland’s series win over Papua New Guinea, taking five wickets in three games at an average of just 8.2.

He also brings his batting skills to the table and can be entrusted with batting at number eight. With age on his side, he can only improve and this tournament gives him a great chance to build on the promising start.

There will be a lot of interest in big Boyd Rankin, who late last year decided to abandon his hopes of being a regular in the England team. Now back with his native side, the 6’7 pace bowler will be one of the players to watch out for in the first round.

Boyd Rankin is back in the Irish fold and will provide a lot of impetus to the bowling attack (source – irishpost.co.uk/inpho)

Rankin can extract great bounce due to his height and will be raring to prove a point. He has been warming up well for the tournament, having taken five wickets for just 33 runs in the two-match series against UAE.

Along with seasoned pro Tim Murtagh and the exciting Craig Young, he makes for a pace bowling trio which cannot be taken lightly. A star of Ireland’s dream 2007 World Cup campaign, Rankin will bring experience and teeth to the Irish attack.

No such list is complete without the mention of Ireland’s poster-boy Kevin O’Brien. A staple in the Irish side for more than a decade now, O’Brien has always provided immense value to the team and his teammates as fans alike will be hoping for more of the same as the World T20 beckons.

His batting form may have dipped a bit over the past year, but there is no denying that he remains Ireland’s biggest game-changer in the shortest format.

His brutal, clean strking of the ball – which was in its glory against England in the famous 2011 World Cup match – coupled with his effective medium pace makes him a prized asset.

Much of Ireland’s fortunes will depend upon how the explosive Stirling kickstarts the innings. Opponents would do well to see the back of this portly opener as he tends to cause maximum damage in a short period of time.

Stirling carries a Virender Sehwag-like aura around him and his strokeplay is as good as the former Indian swashbuckler. His inconsistency though has been a matter of concern; he cannot afford a string of failures if Ireland aim to break into the tournament proper.

He forms a highly compatible opening partnership with captain Porterfield, but it would not be surprising to see him move down the order. The time is ripe for him to get back into groove and if he does, fans are in for a real treat.