A hundredth international match – be it in any format – is a significant milestone in every cricketer’s career. Just as a century of runs in an innings is a matter of pride, reaching a century of matches is something which every player aspires to achieve when he sets out to respresent his country at the highest level.

While many batsmen have reached the coveted threshold of hundred matches, very few have been fortunate to have scored a century in this landmark match. In Test cricket, there have been eight such instances by seven players – Ricky Ponting remarkably scored two hundreds in his 100th Test against South Africa at Sydney in 2005-06.

ODI cricket too has its fair share of batsmen scoring a century in their hundredth match, and it is these few instances that we shall revisit in this post. A select group of seven cricketers have achieved this feat till date.

The hard-hitting Greenidge became the first batsman to record a hundred in his hundredth ODI, but his effort went in vain as Pakistan comfortably won this Champions Trophy match by 84 runs.

Pakistan rode on half centuries from their top three batsmen – Javed Miandad’s 79 being the highest – to reach a formidable 294/6 in their 50 overs. In reply, Wasim Akram took three quick wickets to leave the West Indians reeling at 24/3.

Greenidge, opening the batting, dropped anchor but the damage had been done. He fought valiantly, putting on 50 with Gus Logie for the fourth wicket, 72 with Jeff Dujon for the fifth wicket and an unbeaten 64 with Roger Harper for the sixth.

But he too failed to keep up with the run rate and lacking adequate support, had to be content with remaining unbeaten on 102 off 154 balls – his tenth ODI century – with only five fours as his team crawled to 210/5 at the end of the innings.

In 1989-90, Greenidge became the first – and remains the only – batsman to score hundreds in both his hundredth ODI as well as Test match when he made 149 in the first innings against England at St. John’s.

The second instance occurred more than a decade later and it resulted in a crucial series-levelling triumph for New Zealand. Coming into this final ODI of the five-match series, India were holding a 2-1 lead.

The Kiwis got off to a scratchy start after being asked to bat, before the middle order solidified the innings. Cairns, who was at that point one of the world’s best all-rounders, walked out at 101/3 in the 25th over.

Chris Cairns acknowledges the crowd after reaching his hundred against India at Christchurch in 1998-99 (source – angelfire.com)

He went on to cream a game-changing and career-best 115 from just 80 balls, dominating stands of 69 for the fourth wicket with Roger Twose (63) and 85 for the fifth wicket with Dion Nash. He reached his century – his second in ODIs – in 75 balls and hit seven fours and as many sixes.

By the time he was dismissed by Anil Kumble in the penultimate over, the hosts were in a comanding position and eventually ended with 300/8. Despite half-centuries from Sourav Ganguly and Mohammed Azharuddin, India folded for 230 with the last eight wickets falling for 84.

Cairns’ innings was not a chanceless one though. When he was on 51, the Indians were convinced that he was caught behind but the appeal was turned down. When on 76, he was dropped on the mid-wicket boundary.

Youhana, now known as Mohammed Yousuf, celebrated his hundredth ODI with a fine knock which helped Pakistan rack up a big total in the final of the Sharjah Cup tri-series, which also included New Zealand.

Youhana came out to bat after the Lankan quicks had reduced Pakistan to 33/2. Imran Nazir’s rapid 63 provided an impetus to Pakistan but at 136/4 in the 25th over, the game was in the balance. Younis Khan joined Youhana in the middle at this juncture.

The two Ys proceeded to put the Sri Lankan bowlers to the sword as they strung together a 155-run partnership for the fifth wicket. Youhana was the more assertive of the two as he unleashed his vast repertoire of strokes.

Both the batsmen were dismissed in the final over. While Younis scored 66, Youhana returned with a then career-best 129 from 131 balls with eight fours and three sixes. This was his fifth ODI hundred. Pakistan were thus powered to 295/6.

Sri Lanka raced to 52/1 in the tenth over, but the ever-threatening pace trio of Wasim Akram, Waqar Younis and Shoaib Akhtar engineered a sensational collapse of 9/26 as Sri Lanka were shot out for 78 in the 17th over. Youhana capped a perfect day with the man of the match honour.

Australia were leading the five-match series 2-1 and this fourth ODI at the Premadasa Stadium was thus a must-win for Sri Lanka. A tight bowling display led by spinners Muttiah Muralitharan and Upul Chandana ensured that Australia were bowled out for 233 in the 48th over after electing to bat.

The hosts lost the explosive Sanath Jayasuriya for a duck in the second over, thus bringing Sangakkara early into the middle. While the Australian attack made short work of the rest of the batsmen, Sangakkara seemed to be batting on a different planet altogether.

He shared in an 80-run partnership for the second wicket with his captain Marvan Atapattu (who contributed only 19) and then a further 63 with Mahela Jayawardene for the third wicket. At 143/2 in the 32nd over, the game was Sri Lanka’s to lose.

Sangakkara was already on 96 when Jayawardene fell and duly reached his third ODI hundred in the next over with a brace off Michael Kasprowicz (5/45). However just four balls later in the same over, he flashed at a wide one only to be pouched by Adam Gilchrist.

Sangakkara’s fluent 101 came off 110 balls and contained 15 boundaries. His one-man show however was futile – his dismissal triggered a lamentable collapse as the Sri Lankan batting imploded to 193 all out with 38 balls still unused, handing Australia the series.

Chris Gayle cracked an unbeaten 132 in his hundredth ODI to inspire the West Indies to victory at Lord’s in 2004 (source – richard washbrooke/afp/fox.sports.au)

The winners of this penultimate league match of the Natwest Series were to meet New Zealand in the final at the same venue. The game was a high-scoring affair highlighted by as many as three hundreds.

After being put in to bat, England plodded around and slipped to 54/3 in the 19th over. This brought together Andrew Strauss and Andrew Flintoff and the two went on to create an England record partnership of 226 for the fourth wicket. Flintoff pounded seven sixes in a buccaneering assault.

It took Chris Gayle’s off-breaks in the last over to break the stand as the tall Jamaican accounted for both Strauss (100 off 116 balls) and Flintoff (123 off 104). England’s final total of 285/7 was in stark contrast to their start. Gayle had warmed up in his hundredth ODI with 3/57, but the main course was yet to come.

England got rid of Devon Smith early, but that was as good as it got. Gayle was in great touch and he found a willing partner in Ramnaresh Sarwan. Together they added 187 for the second wicket at nearly six runs an over to deflate the home bowlers before Sarwan perished for 89 off 78 balls. Gayle was however determined to see his side through.

When captain Brian Lara was out, 68 runs were needed off 52 balls. With the support of Ricardo Powell, Gayle ensured that the Windies got over the line by seven wickets and five balls to spare. He remained unbeaten on 132 – the highest score in this list – from 165 balls with 12 fours and a six. This was his ninth ODI ton.

Within a year, another southpaw opener became the sixth batsman to score a century in his hundredth ODI, in this case a round hundred. This was the opening match of the 2005 Natwest Series which also involved Australia.

England inserted Bangladesh in and the innings went on expected lines. Aftab Ahmed (51) was the only batsman to cross 30 as his side struggled to build vital partnerships. The innings terminated at a below-par 190 in the 46th over and it would have been worse as the score was 76/6 at one point.

The in-form Marcus Trescothick came out all guns blazing in reply as the Bangladeshi bowlers were reduced to cannon fodder. The Somerset batsman and his fellow opener Andrew Strauss (82*) mopped off the target all by themselves, reaching 192/0 in a mere 24.5 overs. 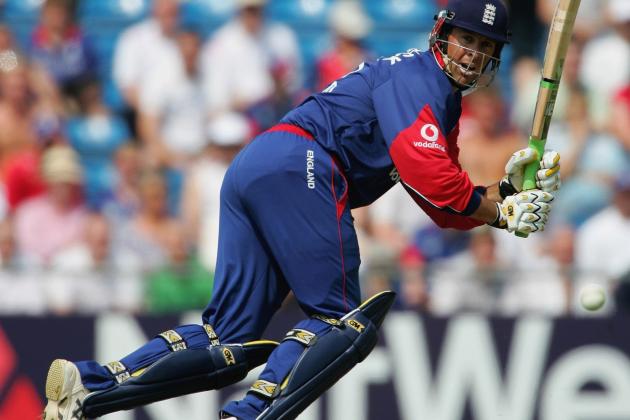 Marcus Trescothick scored his ninth ODI hundred in his hundredth match against Bangladesh in 2005 (source – bleacherreport.com)

Trescothick scored an unbeaten 100, coming off 76 balls. This was then the second-fastest ODI hundred by an English batsman and was his ninth hundred, going past Graham Gooch’s England record of eight. England’s ten-wicket win was only their second in ODIs.

The stylish Sarwan is became the latest entrant into this noteworthy list nine years back. His century helped the West Indies win this exciting third ODI of a five-match series which was locked at 1-1.

After India elected to bat, Virender Sehwag (97) and Mohammed Kaif (61) looked set to propel India to a substantial total as their 112-run stand for the third wicket took the score to 174/2 in the 29th over. However seven wickets were lost for just 68 and the total was restricted to 245/9.

The West Indies had an uncertain start as they fell to 31/2 in the tenth over, at which point Sarwan walked out to bat. He combined with Chris Gayle to add a rapid 85 runs for the third wicket. Gayle and Brian Lara fell in quick succession but Sarwan remained steadfast.

Sarwan snatched back the initiative as he shared in a match-winning partnership with his Guyanese teammate Shivnarine Chanderpaul. The two put on 106 in less than 21 overs to keep the chase on track. Chanderpaul (58) and Dwayne Bravo were dismissed in successive overs – the latter in the final over from which six runs were needed.

With two needed from as many balls, Sarwan crunched a fuller one from S. Sreesanth through the covers to the boundary, thus sealing a nail-biting win in the first international to be played in St. Kitts. He ended with a valiant unbeaten 115 from 119 balls with ten fours and two sixes.