Both the nations were playing in the World Cup for the first time, and the incentive to win this match was to avoid the wooden spoon in Group B. It was the little-known Mumbai-born off-spinner Shaukat Dukanwala who did the star turn for his side.

After being put in to bat, the Netherlands were well placed at 77/1 when Dukanwala struck for the first time, catching Flavian Aponso (45) off his own bowling. Peter Cantrell (47) and Tim de Leede guided the score to 148/2, but thereafter wickets began to tumble due to the pressure of the slow run rate.

Dukanwala made short work of the middle and lower order as he grabbed the last four wickets in just eleven balls to finish with a return of 10-0-29-5 and helped restrict Netherlands to 216/9. UAE overhauled the total in the 45th over to complete a seven-wicket win. Dukanwala shared the Man of the Match award with teammate Salim Raza (84).

Austin Codrington exults after dismissing Hannan Sarkar at Durban in 2003. He went on to bowl Canada to their first World Cup win (source – sport360.com)

Born in Jamaica and a plumber by occupation, right-arm medium-fast bowler Austin Codrington became the first man from an Associate nation to take a World Cup five-wicket haul against a Test team, and the icing on the cake was that it was the catalyst in securing Canada’s first win in the World Cup.

After deciding to bat, Canada were bowled out for 180 in the final over, with Ian Billcliff’s solid 42 from number four being the top score. In reply, Bangladesh slipped from 33/0 to 76/4, with Codrington opening his account by having opener Hannan Sarkar caught behind.

Bangladesh were well on track at 106/4, but suffered a terrible collapse as they lost their last six wickets for just 14 in 44 balls. Codrington trapped all-rounder Alok Kapali plumb in front before mopping off the final three batsmen to condemn Bangladesh to 120 all out in just 28 overs. His final figures read 9-3-27-5.

Rudi van Vuuren, the only man to represent his country in both cricket and rugby World Cups, returned an excellent performance against England even as his team lost by 55 runs.

He dismissed Nick Knight and Michael Vaughan early, both caught by Louis Burger, to reduce England to 43/2 within the first ten overs. The innings recovered through Marcus Trescothick (58) and Alec Stewart (60) as England posted 272/7.

Van Vuuren finished with a return of 10-2-43-5, taking three wickets off the second, fourth and sixth ball of the last over. The Man of the Match honour however went to his teammate, opener Jan-Berrie Burger, who smote 85 off 86 balls to give England a scare before Namibia were restricted to 217/9. 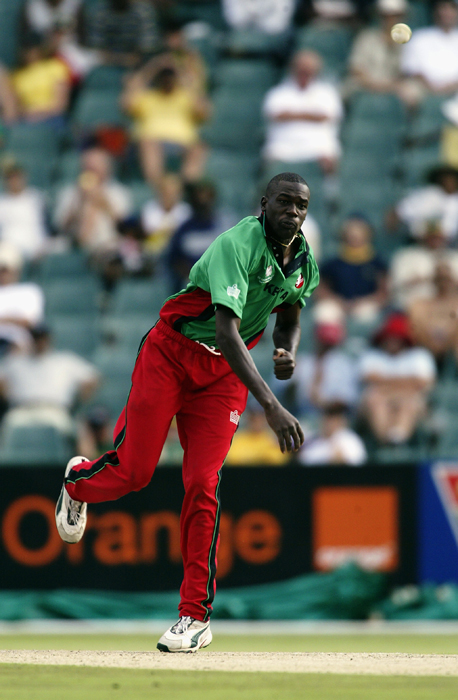 Leg-spinner Collins Obuya, then a 22-year-old, spun a web around the experienced Sri Lankan batsmen to spearhead Kenya to one of their most memorable sporting triumphs at the Nairobi Gymkhana Ground. This win was instrumental in Kenya’s journey to the semifinals.

Kenya were restricted to 210/9 after being put into bat. Wicketkeeper Kennedy Otieno – Collins’ older brother – scored a measured 60 while opening the innings. Muttiah Muralitharan bowled tidily to collect 4/28.

After losing two early wickets, Sri Lanka were looking settled at 71/2 in the 18th over. Obuya provided the breakthrough by dismissing Hashan Tillekaratne in his second over. He went on to destroy the middle order to leave the 1996 champions reeling at 119/7.

Among his scalps were Mahela Jayawardene (caught and bowled), Kumar Sangakkara and Aravinda de Silva (both caught behind) as he worked his way to dream figures of 10-0-24-5. Sri Lanka subsided for 157 in 45 overs, after which the Kenyans took an emotional victory lap.

Best bowling figures in the World Cup for other (currently) Associate nations: