The cricket World Cup always brings its share of strange and unexpected occurrences that make the average cricket fan sit up and take notice. Here is a list of 20 curiosities that have lent to the history of cricket’s premier limited-overs tournament:-

1) Women one step ahead

The first World Cup match was played between England and India at Lord’s. Replying to England’s 334/4, India only managed to crawl to 132/3 in their 60 overs.

The great opener Sunil Gavaskar decided that the huge target was way beyond his team’s reach, and blocked his way to 36 not out from 174 balls. With this, he killed the contest as well the crowd’s appetite – a disgruntled spectator dumped his lunch at Gavaskar’s feet!

In a group match in 1975, the West Indies crushed Sri Lanka by nine wickets in a lop-sided encounter at Old Trafford. Sri Lanka were bundled out for just 86 and the entire match lasted just 58 overs. As the match finished very early, the two teams entertained the crowd with an exhibition match.

The first World Cup final between Australia and the West Indies at Lord’s on 21st June 1975 was a thrilling affair. In the West Indian innings, a highly unusual dismissal took place – Roy Fredericks hooked Dennis Lillee for a six, only to realise that he had tread on his stumps while hitting the shot, resulting in him getting out hit wicket.

Again in the same match in the Australian innings, a crowd invasion happened. With 24 needed off 11 balls, Australia’s last wicket seemed to have fallen when Jeff Thomson was caught. The spectators rushed onto the field thinking the match was over, but they failed to notice the no-ball signal.

Dennis Lillee and Jeff Thomson tried to take advantage of the lost ball and kept on running even as the crowd stormed onto the field in the 1975 final (source – alloutcricket.com)

The ball was lost in the melee and the Australian batsmen, Thomson and Dennis Lillee kept on running for eternity. According to Lillee, they ran 17, but were eventually given four. One of the invaders even made off with umpire Dickie Bird’s white hat!

6) The big cat refuses to pounce

Replying to the West Indies’ formidable 286/9, England were given a solid start from openers Mike Brearley and Geoff Boycott in the 1979 final at Lord’s. However, they batted so slowly that they put the rest of the batsmen under pressure.

In fact, when the score had reached 79/0, West Indian captain Clive Lloyd dropped Boycott on purpose, because he thought it would be in his team’s interests to prolong the slow scoring for as long as possible!

7) The epic that was struck out

Indian captain Kapil Dev played one of the great World Cup innings when he scored an unbeaten 175 out of a team total of 266/8 against Zimbabwe at the quaint Tunbridge Wells ground in 1983. The feat is all the more remarkable considering that India were 9/4 when he came out to bat, and the match was a must-win for his team.

Unfortunately, there is no video footage available of this brilliant innings – the BBC, broadcasters of the tournament, had gone on strike that very day.

8) Courtney, the courteous one

The group match between Pakistan and the West Indies at Lahore in 1987 went right down to the wire. Pakistan’s target was 217 and they began the last over still needing 14 to win with just one wicket left. The equation boiled down to two off the last ball.

As Courtney Walsh came on to bowl, non-striker Salim Jaffar was way out of crease. But Walsh showed great sportsman spirit and chose not to run him out. Pakistan ultimately won the match and Walsh was gifted a carpet by a Pakistani fan for his magnanimity.

After South Africa beat the West Indies in their 1992 match at Christchurch, Andrew Hudson took the middle stump as a souvenir and began rushing to the pavilion in celebration. It was only when he reached the gate that he realised he had taken the stump housing the mini television camera and was trailing ten metres of cable behind him!

10) Mother Nature to the rescue

Had it not been for divine intervention, Pakistan would never have won the 1992 World Cup. In a league match against England at Adelaide, Pakistan were bowled for just 74. England, faced with an easy target, were 24/1 in reply when rain stopped play.

The match could not be resumed and the two teams shared a point each. In a way, it was this one point that helped Pakistan sneak into the semifinals and eventually win the title. 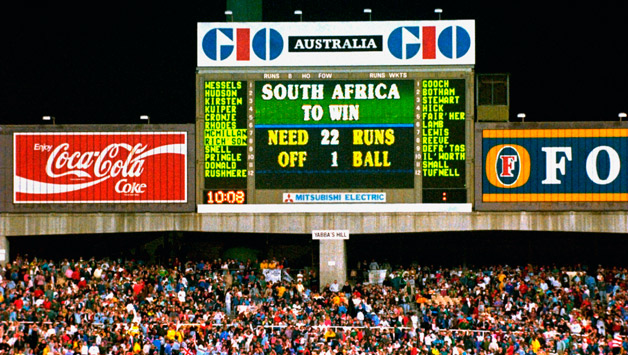 South Africa impressed greatly in their first World Cup in 1992, finishing third in the league stage and thus setting up a semifinal with England. However, the ridiculous rain rule ensured that they were knocked out a tad unfairly in the semifinal at Sydney.

In a 45-over match, England scored 252/6. South Africa fought well and needed 22 off 13 balls – quite an achievable equation – when rain arrived. After the rule was implemented, the equation was revised first to 22 off 7 and then to an absurd 22 off one ball.

First-timers Kenya pulled off one of the biggest World Cup shocks when they beat the West Indies by 73 runs at Pune in 1996. Maurice Odumbe, Kenya’s captain in the match, later recalled:

“I met (West Indian great Brian) Lara at a match in England several years ago before he was in the West Indies team and asked for his autograph. He said he didn’t have the time. When we beat them in the World Cup I went up to him and said: ‘A few years ago I asked for your autograph and you wouldn’t give it. Now I am saying you can have mine.'”

The 1996 semifinal between India and Sri Lanka remains the only World Cup match to be awarded to a team by default. Replying to Sri Lanka’s 251/8, India suffered a major collapse and were tottering at 120/8 in the 35th over.

A section of the crowd, unable to digest their team’s slide to defeat, shamefully began to throw bottles on the field and set the stands on fire. Match referee Clive Lloyd declared that Sri Lanka were winners by default, as it was not safe to continue with the game.

14) An experiment that did not connect

The 1999 group match between India and South Africa at Hove was hit by controversy when it was found during the Indian innings that South African captain Hansie Cronje was receiving instructions from his team’s coach Bob Woolmer, who was in the dressing room, by means of an earpiece. The matter was referred to the match referee, and Cronje was promptly asked to remove the device.

Faced with a small target of 111 against the West Indies at Old Trafford in 1999, Australia’s batsmen raised a few eyebrows when they took more than 40 overs to achieve the victory.

Later, it was revealed that Australia purposely adopted a go-slow tactic as they did not want the West Indies’ run rate to go down, thereby helping them to qualify ahead of New Zealand for the Super Six round. Australia had earlier lost a group match to New Zealand, which would have a bearing on Australia’s standing, as points against qualified teams were carried forward.

Two pigeons were unfortunately killed on the field during the Super Six match between Australia and India at the Oval in 1999. The first pigeon died when Australia’s Paul Reiffel threw the ball towards the stumps from the boundary, striking the creature. Later, a second pigeon fell victim when Ajay Jadeja edged ball to the boundary, hitting it on the way.

17) The greatest choke ever

Host nation South Africa were knocked out in the worst possible fashion from the 2003 World Cup. In a must-win group match against Sri Lanka at Durban, the Duckworth/Lewis method came into play with rain falling steadily late in the South African innings. South Africa’s revised target was 230 from 45 overs.

In the 45th over, Mark Boucher hit a six off the fifth ball and pumped his fist, believing that the job was done. He blocked the last ball – which proved be to costly, as South Africa had miscalculated the target to be 229. The match was tied as the crowd watched their team’s exit in shock.

Bermudan policeman Dwayne Leverock, weighing at over 280 pounds, provided one of the most iconic World Cup moments when he took a catch at first slip off the bowling of 17 year-old Malachi Jones to dismiss India’s Robin Uthappa at Port-of-Spain in 2007.

Leverock dived to the right to take a stunning one-handed catch, after which he took off on a celebratory run across the field even as Jones wept with joy. “He has flown like a gazelle…the earth shook! Oh what a catch!”, commentator David Lloyd exclaimed on air.

Australian great Adam Gilchrist pounded the Sri Lankan attack with a whirlwind knock of 149 from 104 balls in the 2007 World Cup final at Bridgetown. This title-clinching innings was studded with 13 fours and eight sixes.

The secret to his powerful hitting turned out to be a squash ball, which he placed in the glove of his bottom hand and credited it for giving him a better grip. Australia won the match easily by 53 runs on the D/L method.

In a remarkable occurrence, the last two cricket World Cups have each recorded the same number of total runs scored – exactly 21333 runs were scored in the 2007 (51 matches) as well as the 2011 edition (49 matches).