After two winless tournaments in 1999 and 2007, a much-improved Scotland have their best chance to register a maiden win in the World Cup in the 2015 edition. Here is a look at the World Cup history and prospects of the current third-best Associate nation in the upcoming World Cup.

Scotland have lost all eight matches they have played in the World Cup so far. They first played in the 1999 edition, where they qualified by virtue of finishing third in the 1997 ICC trophy. Moreover, they also got the privilege of playing two of their five group matches at their home ground, the Grange Cricket Club Ground in Edinburgh. Scotland were placed in Group B along with Australia, Bangladesh, New Zealand, Pakistan and the West Indies.

In their first match against Australia at Worcester, Scotland competed decently and defending 181,  stretched their much-vaunted opponents into the 45th over before losing by six wickets. Then at Chester-le-Street, they had Pakistan on the mat at 92/5 before allowing them to recover to 261/6 – of which 59 were extras. The target proved to be 94 runs too many for the Scots against the Pakistani pace attack.

Scotland’s third match – against Bangladesh – was their first at Edinburgh, and presented them with a golden opportunity to score a win in front of their home crowd. After captain George Salmond elected to field, the pace duo of John Blain and Asim Butt reduced the ICC Trophy winners to 26/5. The score later became 96/7, but Minhajul Abedin’s gritty 68* helped propel the total to 185/9. In reply, Scotland slumped to 8/3 and 49/5, from which they could not recover. They folded for 163 with 3.4 overs still to go.

Up next were the West Indies at Leicester, and it turned out to be an embarrassingly one-sided match. Scotland were rolled over for a paltry 68 in 31.3 overs, which the West Indies chased down in just 10.1 overs to gallop home by eight wickets. Their final game, against New Zealand at Edinburgh, was equally disappointing as they lost by six wickets after being bowled out for 121. Gavin Hamilton (217 runs at 54.25) and Blain (ten wickets at 21) were the silver linings of the tournament.

Gavin Hamilton pulls one from Shane Warne during Scotland’s first ever World Cup match, against Australia at Worcester in 1999 (source – cricketscotland.com)

Scotland’s second World Cup appearance was in 2007 in the West Indies. They defeated Ireland in the final of the 2005 ICC Trophy to qualify for the sixteen-team tournament. This time, Scotland, led by Craig Wright, found themselves in a tough Group A, along with defending champions Australia, South Africa and Netherlands. All three matches were played at Basseterre. In their opening encounter, Scotland ran into Australia, who secured a thumping 203-run win after posting 334/6.

Against South Africa, Scotland mustered a modest 186/8, which was easily chased down by the Proteas, who reached the target with seven wickets and more than half the number of overs still remaining. The final encounter against fellow Associates Netherlands was possibly the biggest dampener. After being put in, Scotland lasted just 34.1 overs as they were bundled out for 136. The Dutchmen overhauled the total in 23.1 overs to win convincingly by eight wickets.

Road to the 2015 World Cup and recent form

Scotland were the third Associate team after Ireland and Afghanistan to secure qualification for the 2015 World Cup. In the World Cricket League which concluded in 2013-14, the Scots had an average performance overall and finished fifth out of eight teams. However, they ensured that the second opportunity to qualify – at the World Cup Qualifiers in New Zealand in early 2014 – was not wasted. In this tournament, ten Associate nations took part with two World Cup spots up for grabs.

In the group stage, Scotland bounced back from a narrow defeat to Hong Kong by notching successive wins over Nepal, UAE and Canada. They followed this by three more wins in the Super Sixes, against Namibia, Papua New Guinea and Kenya. The final game against Kenya was a must-win for Scotland – in the event of a loss, Hong Kong would have gone through to the World Cup at their expense.

Chasing Kenya’s 260, Scotland recovered from 169/6 to post a tense three-wicket win and gain passage to the World Cup. In the final against UAE at Lincoln, then stand-in captain Preston Mommsen scored a brilliant, unbeaten 139 to power Scotland to 285/5, a total which proved to be 41 runs too many for UAE, who too qualified for the World Cup. 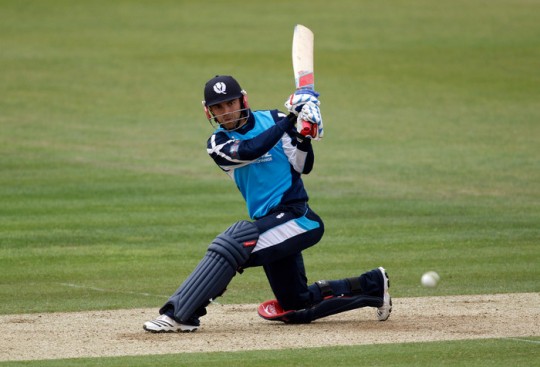 Preston Mommsen, who was a star performer in the World Cup Qualifiers in New Zealand, will be leading Scotland in the 2015 World Cup (source – alloutcricket.com)

Since that success, Scotland have played only seven completed ODIs, including a one-off home game against England, a three-match series in Ireland and the recently-concluded tri-series with Afghanistan and Ireland in the UAE. They lost the rain-shortened game to England by 39 runs, and managed to keep the margin of defeat to 2-1 in Ireland. In the UAE tri-series, they lost once each to Afghanistan and Ireland, and their sole win was a built around a sensational bowling display which saw the Afghans get bowled out for 63.

In late September last year, Scotland toured Australia and New Zealand to play seven matches against state sides with a view to get acclimatised to the conditions. The Scots won two and lost five of these games. Their best display came in a one-run defeat to a ‘New Zealand XI’ – an international side in all but name – at Lincoln. Kyle Coetzer, who was the regular captain until the start of this tour, scored 333 runs in six matches at 55.50.

There are no surprises in the 15-man squad for the World Cup as Scotland have stuck to the tried and tested group of players who have been behind the team’s recent development. The squad is as follows – Preston Mommsen (captain), Richie Berrington, Kyle Coetzer (vice-captain), Freddie Coleman, Matthew Cross (WK), Josh Davey, Alasdair Evans, Hamish Gardiner, Majid Haq, Michael Leask, Matt Machan, Calum MacLeod, Safyaan Sharif, Rob Taylor, Iain Wardlaw.

South Africa-born Mommsen was Scotland’s leading batsman in the World Cup Qualifiers, scoring 520 runs at 86.66, including the above-mentioned 139* in the final and a crucial 78 in the must-win game against Kenya. He is a vital cog in the middle order and will be supported by county regular Coetzer, Calum McLeod – who hit a record 175 against Canada in the Qualifiers and then 116* against Ireland – and Matt Machan, as well as Richie Berrington and Michael Leask. Leask, one of the most exciting Associate talents, gave England a scare in the ODI last year with a 16-ball 42.

On the bowling front, off-spinner Majid Haq is the most experienced – he is the only player in the squad to have played the 2007 World Cup. The pace attack looks promising, with Josh Davey, Rob Taylor, Alasdair Evans and Iain Wardlaw forming an effective quartet. 24 year-old Davey will be the one to be watch out for, especially after his all-round show of 53* and 6/28 against Afghanistan in Scotland’s 150-run victory in the tri-series match. He also took 3/28 in the ODI against England. 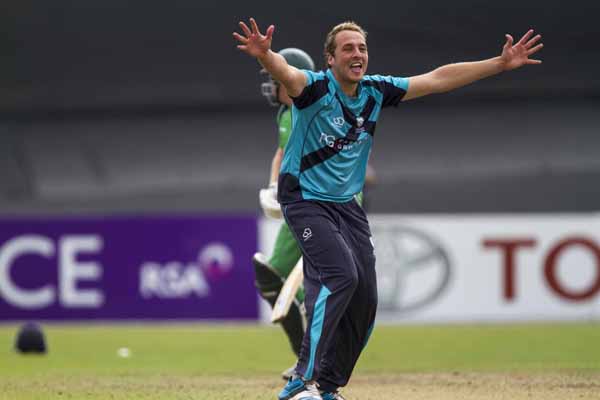 Who will they face Down Under?

Scotland are placed in a challenging Group A in the 2015 World Cup, along with co-hosts Australia and New Zealand, Sri Lanka, England, Bangladesh and Afghanistan. They open their campaign on 17th February against New Zealand at the University Oval in Dunedin. While they can take heart from their one-run defeat to the New Zealand XI last year, Scotland will find it tough first up against a side brimming with hard-hitting batsmen on a ground with small dimensions.

On 23rd February, Scotland meet England at the Hagley Oval in Christchurch. They can be expected to raise their game against the English, just as Ireland did in 2011. Three days later, they will be back in Dunedin to face Afghanistan, a match gives them the best opportunity to secure their first win in the World Cup. The Afghans may be ranked higher in the ODI rankings, but that will amount to nothing in what promises to be an interesting tussle between the two Associates.

Scotland’s fourth fixture will be against Bangladesh at Nelson’s Saxton Oval, and they will look at this game as another victory prospect. Bangladesh have been historically unpredictable and inconsistent in alien conditions, and if the Scottish bowlers perform to their potential, there is no reason why Bangladesh cannot be beaten. The last two matches will be played at the Bellerive Oval in Hobart against powerhouses Sri Lanka and Australia on 11th and 14th March respectively, both games being day/night affairs.

Winning against Afghanistan and Bangladesh will definitely be on Scotland’s agenda. If they manage to defeat both of them, all they will need is a win against one of the big four in the group in order to have a realistic chance of qualifying for the quarterfinals. On paper, Scotland’s batting looks stronger than their bowling, but of late, the bowlers have done well especially in favourable environs. While the attention is on Ireland and Afghanistan, the unheralded Scots might just turn out to be the surprise package of the tournament.

As the World Cup beckons, Scotland are in better shape than ever before to make an impression in the tournament. One can expect them to notch at least one win, and thus finally open their account in cricket’s premier limited-overs event. It is an important tournament for Scotland, because if the ICC has its way, we may never see them playing in the World Cup again.